OCA Music: The virtual choir project - The Open College of the Arts
Skip to content 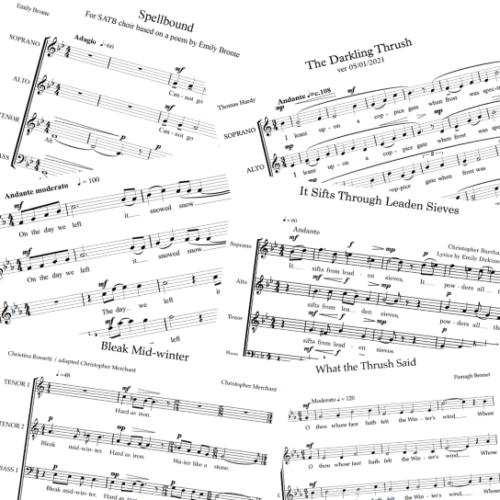 With in-person study visits, especially those involving singing, off the cards due to the pandemic, we had to think somewhat outside of the box to get a composition workshop together in 20/21! With a handful of singers within the student body of the music department, we decided to give a ‘Virtual Choir’ project a try.

Students were tasked with writing a short piece for mixed or male voice choir, on the theme of ‘winter’, which would then be recorded by their fellow students. The individual parts would be recorded separately by each singer, and then stitched back together afterwards to form the choir.

This raised some interesting points, and learning opportunities. With the composers not being present at the recording to offer any input, and without a conductor to direct matters, the scores they produced for the project needed to be precise and detailed. The MIDI playback from each score would be the template that the singers would record themselves singing along to.

Additionally, composers were encouraged to also try singing and recording a part for their choir, thereby seeing the process from the perspective of the performer, and also potentially experiencing having to perform their own work, if they chose to.

The pieces were duly recorded and the resulting ‘performances’ were premiered and discussed at an online workshop using Zoom last month. Once again, it’s been a reminder that distance doesn’t deny opportunities to learn and create.

Some thoughts from the composers:

Eight students composed pieces, and over the winter months we each recorded a selection of parts from them. These recordings were then assembled, so that in the final session we were able to hear a virtual choir recording of each piece by real humans. It was fascinating to see how each of us had interpreted the brief, and the eight works were all quite different from one another. Of course, it was thrilling to hear my own work performed by real people, even with the limited resources available. The project as a whole was more or less successful, and I was pleased to hear some nice comments about my composition. (Tim Wright)

The great thing about the VC project was that it was end to end, from a project brief through to hearing and reviewing the recorded pieces. You learn a lot about what works and about pitfalls by being a performer and critic as well as composer, that’s for sure. (Christopher Merchant)

The Virtual Choir project was an ambitious one, but hugely enjoyable and profitable. I do work best when I have a specific composing task, the brief being anything to do with winter. I also work well with having words to set. I tried to bear in mind the capabilities of the singers, including one or two more challenging moments. But overall I aimed to keep the music straight forward, and attend to matters such as breathing and all parts having sufficient movement to keep them interesting. The less said about my singing the better! As the choirs I accompany closed for the Pandemic, I hadn’t sung for a year and was mortified to find that even singing in tune was a challenge. There were many retakes, but since Chris had provided a recorded click track with our notes to sing to, it made life easier.

I found recording for other people’s scores quite challenging, and it showed how much we as composers must work to write everything clearly. Being able to hear my setting sung by real voices was very helpful, and with imagining a conductor, I was satisfied with my effort. I was pleased that the singers found my setting good to sing without much alteration. Being able to discuss everybody’s work was very beneficial, and I hope we can have another choir project soon. (Fionagh Bennet)

A selection of clips from the project can be found below, and on Soundcloud.