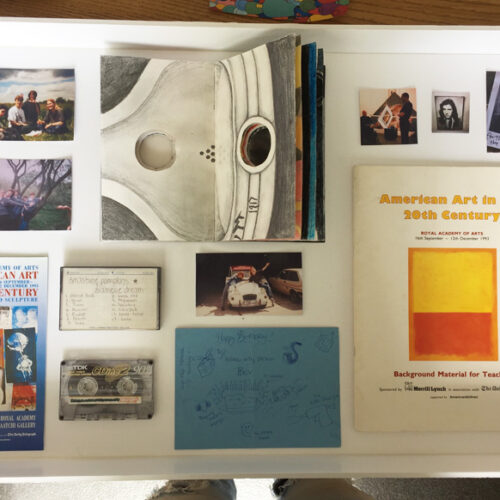 Mel Brown has just completed Drawing Two: Investigating Drawing a part for Creative Arts degree. An important part of that Unit – and of other Level Two units – is the ‘Parallel Project’. It’s a chance to develop a project alongside the normal exercises and assignments. Mel’s project focusses on a day in 1993 when she visited the ‘American Art in the 20th Century’ exhibition at the Royal Academy as an A Level Art student. The work produced encompasses, painting, drawings, film-making, installation as well as her own curation of the things she’s made. She even interviewed her old art teacher about the day. You can read about how the piece developed – from modest and shaky beginnings – on her blog here: https://notscaryspice.wordpress.com/2020/05/13/parallel-project/.

In the following interview I ask Mel about the whole process. As a tutor that’s seen a lot of these projects, it’s perhaps important to mention that no two projects are the same and there isn’t really a ‘right’ answer. The important thing to take from this is that a complex project doesn’t arrive fully-formed but is developed over time. The final format (at least for now) of this work is a recreation of Mel’s teenage bedroom – something that she couldn’t have imagined when she started.

Was there a moment when you knew what you were going to concentrate on? Were there any false starts?

I remember around the end of Part 2 feeling like I genuinely had no clue what my personal voice was or what direction to go in with the parallel project. However, the sound advice ‘work creates work’ really was the key to finding this, and I’d advise anyone who feels similarly just to keep creating as much as possible – something will emerge! Part 3 (the drawing machines exercise and assignment in particular) was when I finally understood that I needed to stop worrying about making a final piece and trust that the exploratory process would result in something worthwhile. I think this realisation really informed the style of work that became the parallel project. I also remember that around the same time, one of the research points led to a discussion about an exhibition I’d been to in sixth form, and whether or not Jackson Pollock had shown there. I ended up buying a copy of the catalogue and as mentioned in the critical review, this became my ‘madeleine’, the lightbulb moment that I’d been waiting for. From then on I was able to combine this new exploratory way of working from part three, with my memories of the day which became the basis for the parallel project.

This project is quite focussed but has given rise to a wide variety of work. Can you elaborate a little on that tension?

Once I had a copy of the catalogue I was overwhelmed with recollections that I’d not exactly forgotten but had put to the back of my mind somewhere. The work happened as the memories happened, so I didn’t consider at the time that I was using a lot of different types of media to create the parallel project. I simply worked from my first memory of the day which was listening to a particular song and this resulted in an abstract painting. It was very different from my next memory, planning my route, which developed into a crime scene style map and then the next, wearing my old leather jacket, which became a video and so on. One memory led to another and I expressed it in the way that it came to me at the time. I think the tension probably comes from the frantic way in which I was bouncing from one memory to the next in quick succession.

You spoke to your old art teacher and a friend who was with you on the day in question. How did getting their memories influence the project? Were you surprised about anything they said?

Firstly, it was great to reconnect with them and see what they were up to now. I knew that my friend had been as excited by the exhibition as I had as her response was similar to mine. However, I was surprised to find out that my old art teacher only had a vague recollection of the day, saying that all the school trips had merged into one. This was really useful for me as I realised that the difference between us was that my friend and I were seeing this kind of work for the first time – we had grown up in a village in Suffolk so visiting a gallery in a city was a big deal for us. This helped me to understand that what I was trying to do in my work was to re capture the feelings we’d had walking into The Royal Academy that first time, and to try to make sense of why it had had such an impact on us both.

Your critical review is linked to this project but not explicitly about it or about any of the artists you’ve revisited. It deals with more theoretical or philosophical ideas related to memory. Can you explain how researching and writing the review helped you make the physical work?

It’s quite hard to explain, but by writing the critical review, I was able to connect my thoughts and feelings to the physical work I was making for the parallel project. In doing so it helped me to understand the importance that this one day has had on everything I have done since. Although the critical review is not about this one day it does explore the act of re-seeing and asks whether memory needs to be 100% accurate to be relevant. In this respect I think that the critical review was important to help me understand why I felt this need to revisit this moment in my physical work.

Can you say a little about the final form of the piece and how you came to settle on the idea of an installation?

I’d had a few ideas orbiting my head about how the final piece would look, which revolved around recreating the exhibition in some way. To begin with I thought about making a Royal Academy style gallery space, but to be honest the decision to recreate my teenage bedroom to exhibit the work in came about partly due to lockdown. I was limited to the places that I could display the work, so I focused on what was to hand. Once I’d thought about it, a bedroom (and its connection to a dreamlike state) seemed much more suitable and also meant that the room itself became another work for the parallel project. Ironically, I had spent the whole of part four complaining that I did not like installations and begrudgingly completing the exercises, so it was a good reminder that I should keep an open mind and to persist with new things even if they don’t seem to work at first.

Good question! There’s so much more I could have explored just from this one day and I feel like I could have carried on adding pieces as further memories emerged. I’m currently working on a memoir project based around lockdown which will be put in a time capsule along with other artist’s work. I’m interested to see how the idea of creating work that may not be seen for another 50 years will change the way that I respond to it. After that, I’m excited to see if there are other objects out there that trigger different memories and how these will influence my work in the future; it feels very much like the parallel project is just the tip of the iceberg.