In 2020 face-to-face became screen-to-screen, forcing many of us to rethink our relationship to social media, digital images, and photographs.  This has tied in with anxieties around authenticity, fake news, deepfakes (digitally created visuals that are so realistic that it is almost impossible to distinguish them from real photos or videos) and selfie culture, with its filters and airbrushing.

Earlier this year, image manipulation took another creepy turn when the genealogy platform My Heritage launched Deep Nostalgia™.  The feature, intended to be used on old family photographs, allows you to bring your long-dead ancestors back to life, but it has also been used to animate a range of images and objects, from the Mona Lisa to Barnsley Museums’ dolls. However, ask any student on Photography 1: Context and Narrative and they will tell you that image manipulation (and the debate on what constitutes ‘acceptable’ alteration) is nothing new.

Arguably the most famous photographic hoax of the twentieth century is being marked by the current exhibition at the Treasures of the Brotherton Gallery, Leeds, curated by Dr Merrick Burrow.  The Cottingley Fairies: A Study in Deception (which you can view online here) reveals how, just over one hundred years ago, Sir Arthur Conan Doyle (creator of the celebrated fictional detective Sherlock Holmes) was fooled by fake fairy photographs.  The hoax (characterised as a family joke that got out of hand and “an accidental conspiracy”) began in 1917, when sixteen-year-old Elsie Wright took a photograph of her nine-year-old cousin Frances Griffiths with some dancing fairies she had drawn, cut out, and attached to hat pins near their home in the village of Cottingley, in West Yorkshire.  This, and subsequent photos (the original viral selfies), eventually found their way to Conan Doyle, who was researching an article about fairy life to prove the case for his interest in spiritualism.  He staked his reputation on the authenticity of the images in The Strand magazine in 1920. 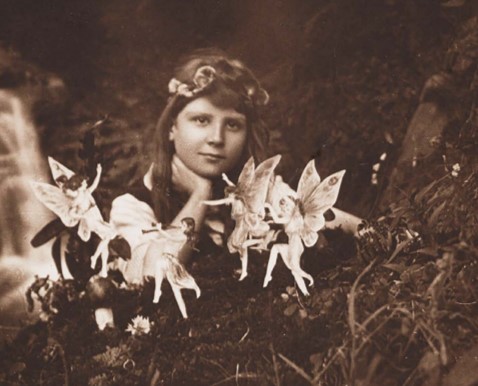 The photographs provoked ridicule and scepticism, which, as one newspaper commented in 1921 “was only to be expected…Still, there was the camera, which, we are told, cannot lie”.  The images also captured the public imagination.  A nation reeling in the aftermath of World War I was perfectly primed to be fascinated by this magical tale, which offered hope, comfort, and photographic proof of other mysterious realms beyond everyday perceptions.

Debate raged over the photos for decades, with Elsie and Frances only revealing how they faked the photographs in 1983.  (Frances steadfastly maintained until her death that she really had seen fairies and that one of her pictures was genuine.)  To modern eyes, these photographs are not particularly convincing.  In a photoshopped world, our awareness of image manipulation has contributed to a more ‘sophisticated’ viewing audience, but the story of the Cottingley fairies still enchants, playing as it does with themes of fakery and imagination.  How do you balance healthy scepticism (and the urge to debunk) with openness to new information and the desire to believe?  Sometimes, when it comes to image-making and image-faking, all it takes is a few hoax fairy photos to remind you to maintain your sense of wonder…and look a little closer.

This audio only version of an online talk by curator Dr Merrick Burrow gives more insight into the fairy photo hoax: The Cottingley Fairies: A Study in Deception – YouTube

2 thoughts on “Image-making and image-faking”