Happy Movement - The Open College of the Arts
Skip to content 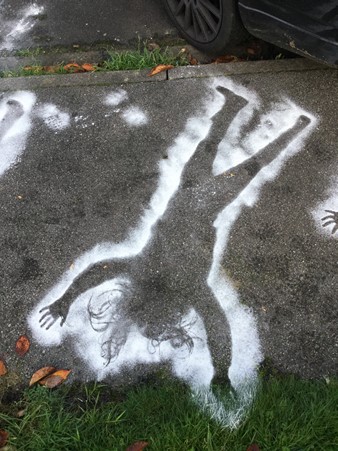 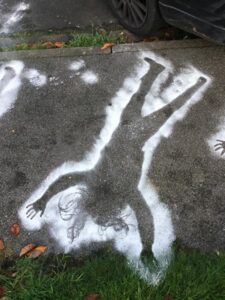 EC: Here is one of my temporary artwork pieces. I had the idea of creating a happy moving piece of a child outside playing. I used flour and a sieve to create it, I really love the details it has brought out especially the hair strands!  My initial thought was when a child sees snow, they want to roll around in it and create snow angels. I really wanted to portray the feeling of happiness and joy and even though we are in lock down there is a sense of community about it. I wanted to get people talking and it has definitely caught lots of attention of passers by!

ED: There is such a sense of fun in this drawing, and the level of detail it has captured really adds to that, as well as the way she has used a series of images rather than just one. When Emily spoke to me about this drawing I was struck by the way it interacted with site. It attracted neighbours and conversations and I think makes a lovely and poignant point about childhood freedom in this period of movement restrictions.