Wherever people come from or wherever people go, people’s culture and therefore identity is in a constant evolution, a change that looks back and forward in history. For this reason, appearance plays a very important role in that, clothing establishes a way of exteriorising our personality, our own identity and thereby our history. According to that, the inspiration for my work, usually comes from my curiosity on identifying elements from different cultures that have been appropriated for another different culture, and have been given a different meaning and appearance to the previous one, at the same time as trying to understand the reasons why this has occurred.
Colonisation, massive migratory movements and globalisation are key factors which influence the change of cultural references and identities through clothing, particularly in the small communities and minorities that are overwhelmed by large and powerful cultures. Among these factors it is worth bearing in mind the role that colony had at the time the influx of mass media and emigration occurred. All these issues affect the groups identity around the world and this is in turn reflected on what these groups wear. To understand why nations have had to adapt and readapt their identity, we need to research on the cultural appropriations of these cultures from one another’s cultures and the reasons why they have changed and readapted their clothing and cultural practices in some cases.
I would like to introduce to you a particular tribe from Namibia called Herero, which I find particularly interesting because of the re-appropriation of past settlers clothing and for the strong historical story that the clothing expresses. This ethnic group of about 250.000 people have been readapting through the political, economical and cultural changes that Namibia has suffered. From 1850s onwards, this African territory in the south west of the continent, mainly a vast desert, received people emigrating from different parts of the World. These people consisted of Mixed European, Asian Ancestry, and other African communities that brought new commodities and ideas.
They also brought new styles of clothing, and it was during these early days of contact with the wider world that the Herero were first introduced to military uniforms and Victorian style dress. It is very remarkable that around the same time the germans also arrived in the territory, and it was at the end of the century when they stablished their colonial rule, becoming German South-West Africa.

German administration was often brutal and ruthless, and encompassed extreme notions of racial supremacy, whereby the country’s original citizenship was to be either exterminated or turned into a soulless labour contingent.
The occupation, and consequently Herero oppression triggered the wake of the German-Herero war and sequential end of the German colony. Immediately after the germans left, military uniforms took a very important place in the Herero identity, The symbolism and insignia of German uniforms became obsolete, and so available for reinterpretation along Herero lines, while narratives provided the uniforms with new meaning; for example, that wearing the enemy’s uniform will diminish their power and transfer some of their strength to the new wearer.
This re-appropriation from the Herero of the soldier’s uniforms, leads to the question, Why would Herero wear the clothes and uniforms of their enemy? The answer could be that in some way, doing that, would mean that they would keep their past history alive, wearing it every day, being a memory of their ancestors.

One of the local elements added from the Herero are the military caps topped with jackal fur and slouch hats adorned with soaring plumes. In addition to this, The Germans made a strong impact on the Tribe’s culture, and the re-appropriated clothes recall the history of the past still to this day.
Also women assimilated the dresses of the European missionaries and specific dress making skills introduced by the missionaries wives. This has its roots in the fashion of the Victorian era but they readapted it, introducing bright colours and in particular head pieces, that look like cattle horns. For Herero women, it symbolises status and pride. Their dresses also have different meanings, depending on their shape. According to that we can identify the dress as part of the cultural transformation of Herero adding a social function to the wearer.

In this post we celebrate the learning journey of photographer and OCA student, Anne... 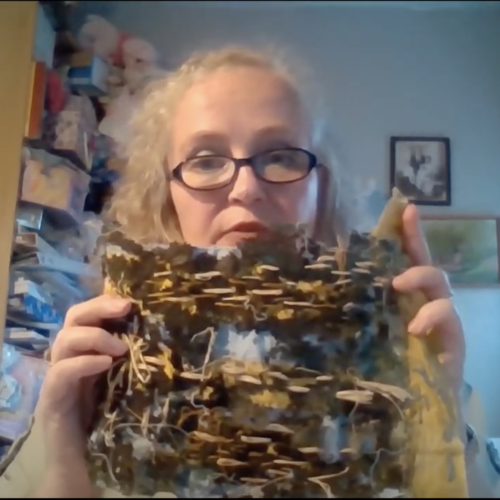