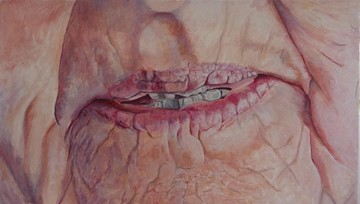 As an art student / artist applying for and getting £100 pounds to spend on art is always nice. When I saw the email asking us to apply, I didn’t actually expect anything to come of it but happily it did and the only thing left to do was to decide how and what to spend it on. There is always something an artist needs, wants or just likes the look of but as it was meant to further our artistic career, I decided to use it to build a good website with my own domain name and not a generic one.

I used Wix which was fairly easy to use and periodically they have a half-price sale which I took advantage of. It took me a while to set it up and I have since changed it to a business version without too much hassle and a bit more money. If I am truly honest, I only did it because it was part of the SYP course but it has since proved itself worthwhile. I used it to great effect when applying for a gallery space as the exhibition paintings are all in the same place and easy to access. This certainly helped to satisfy the curators of the gallery. I have also received three painting commissions through the site which was unexpected but actually means it is now very much in profit. Without the grant I think I would have just used the free version with the Wix email address added but this looks so much more professional.

As I did get the website for much less than I expected I decided to use the rest of the money to try a painting competition and rather than start small I entered the John Moores with the painting below. 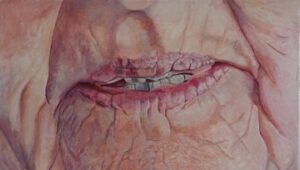 At £30 per entry, it would not be something I could normally do and especially as I was unsuccessful. Since then, I have applied to two others and been successful once. If I hadn’t tried for the John Moore’s I’m not sure I would have tried the route of competitions. I have since had the painting below accepted for the Ferens Open Exhibition in Hull later this year. 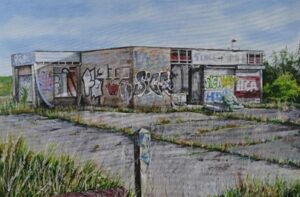 One hundred pounds does not seem a lot in today’s world but it gave me the opportunity to move my artwork out into a wider platform and try something I could not justify the expense for. Because of it I have sold three more paintings and will be showing another in a city centre gallery plus it has helped me get my degree show into a town centre gallery albeit a year later than expected.