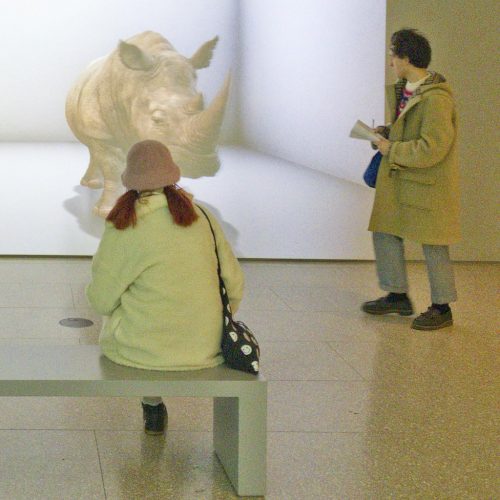 I was meeting a friend at The Royal Academy recently to see a collection of Lucien Freud’s paintings when I saw a poster for the Eco-Visionaries exhibition. Since my friend is a “friend” of the RA, we were able to enjoy a coffee in the members room then see the exhibitions for free. I was curious to see what kind of art was being used to convey ecological themes and so after Lucien Freud’s piercing self-portraits, we made our way to the back of the building, up a flight of stairs and were soon engulfed in a mixed media space.

There was not a lot of work on show yet what was there needed time to understand. Perhaps the most impressive was a large video screen showing what appeared to be a life-sized rhinoceros walking around, titled as The Substitute by Alexandria Daisy Ginsberg. The realism was such that it felt real almost as if it was in the same room. Usually, the immediate appeal of work is because of something personal and I still carry vivid memories of seeing rhinoceros in North-East India which were saved in the early twentieth century thanks to the intervention of the Viceroy’s wife, Lady Curzon, who believed they were unicorns. The species pictured here, The Northern White Rhino from Africa, was not so fortunate and has been declared officially extinct. This piece of video-art cannot be accurately described as anthropomorphic, it is more concerned with impersonation. While scientists have preserved this rhino’s DNA in the form of sperm, the art work is about archiving the animal’s behaviour. The sound of the rhino in the video was acquired from a Czech researcher who made recordings of the last herd of Northern White Rhino while AI was used to choreograph its’ behaviour. The artist comments “I wanted there to be a visceral reaction when you watch it.”

A page of the Royal Academy website is dedicated to the exhibits. Another installation view that caught my mind was a futuristic design for living in the desert called The Green Machine from 2014 but the piece I spent the most time with (we were part of a group and lead into an ante-room for a quarter of an hour to view it) was a curious presentation of jellyfish and humans titled “win, win” which took a somewhat introspective view of the human race while glorifying the success of brainless jellyfish to thrive in the increasingly warmer and polluted waters of our time that most other species including humans would perish in. We sat on seats watching what might have been a water tank full of floating jellyfish but was of course a video screen while a voice explained what was happening in the current world while occasionally asking us, the audience, to raise our hands in response to questions asked. I emerged from this experience slightly bemused but the message is clear. As Australian marine biologist Lisa Ann Gershwin says “We are in this crazy, unforeseen and incomprehensible situation where we are competing against jellyfish. And they are winning.” Further information about this exhibit can be found online.

Perhaps it is the role of art, to point but not to comment, to avoid unnecessarily conceptualising about what is happening around us as this can too easily lead to explaining away what is a growing crisis, one that the establishment seem unable to face. Yet I found myself compulsively researching what I had seen with a need to know more about my subject. The Royal Academy produced a booklet to accompany the exhibition called Eco-Visionaries: conversation on a planet in a state of emergency; it contains a series of interviews with the artists concerned who helpfully explain what their work is about.

There are a number of events running alongside this exhibition, one of them being a film called Earth which ran for two hours during which time many in the audience left while the remaining seemed to be twitching awkwardly. The imagery of the film was Ed Burtynsky-like and evoked a sense of the industrial sublime yet after awhile the dust of massive mining operations seemed to settle on the viewer, challenged by the mass of visual information laden with apocalyptic commentary. Before the film, the curator of the Eco-Visionaries exhibition, Gonzalo Herrero Delicado, interviews the eco-journalist Gaia Vince who seemed remarkably knowledgeable about a subject that is surely an unknown territory. No one really knows what the future of climate change actually holds.

Looking for further comment in the catalogue, I read with disbelief about “the endless summer we are entering.” (Eco-Visionaries, Gadhano P, page 10). The suggestion that global warming means we will be swapping coats for swimwear is entirely misleading; a rise in overall temperature of only one or two degrees centigrade in the next century is enough to disrupt weather systems. There was something frustrating about this interpretation; such commentary felt pretentious. Since March 2017, The Department of Energy in The United States has banned the use of the word “climate change” a shameless denial of the crisis facing the human race; while the young Swedish climate protestor Greta Thunberg is being told to go into anger management, I can’t help but think her feelings are justified.

This exhibition speaks volumes, it is as the exhibition states, a response to “some of the most urgent ecological issues of our times”. It does need to be examined closely though since alone, the purely visual content may not really convey the gravity of the message.

< Previous Post Starting a new course – ways of getting stuck in and finding your feet.