OCA recommends: ‘Manga’ at the British Museum, until 26 August 2019 - The Open College of the Arts
Skip to content 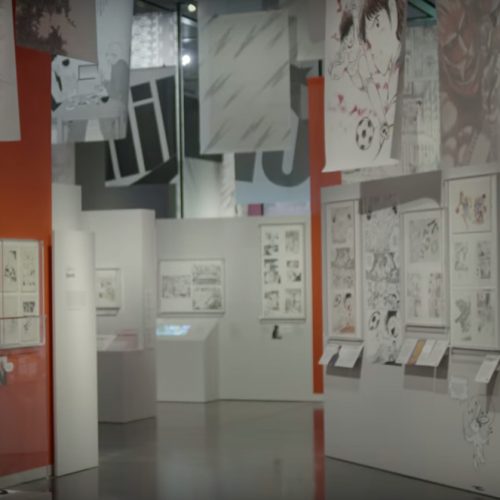 OCA recommends: ‘Manga’ at the British Museum, until 26 August 2019

Before I visited the British Museum’s ‘Manga’ exhibition last week, I would have said my knowledge of the area of Japanese manga comics was fairly reasonable, but by no means expert. I first became aware of significant manga works like Katsuhiro Otomo’s ‘Akira’ and Kazuo Koike and Goseki Kojima’s ‘Lone Wolf & Cub’ in the 1990s, when American publishers reformatted and translated them (normally manga read from back to front and from right to left), and ever since have occasionally dipped into various manga in the specialist sections of London comic shops Gosh and Forbidden Planet, and skimmed through survey books like Paul Gravett’s very readable ‘Manga: Sixty Years of Japanese Comics’ (pub 2004).

So visiting the exhibition confirmed to me I still only knew a little of the huge range of visual approaches and genres that manga publishing comprises. The exhibition space is one very large room, visually kinetic and colourful, with lots of asymmetrically-placed temporary display walls variously focussing on the historical precedents for manga, its development through the 20th century, the many sub-genres (including comedy, sci-fi, horror, romance, sports and music) and its recent contemporary dissemination into the areas of cosplay, conventions, cinema and computer games. There is a large reading space with hundreds of books, videos of manga artists drawing their characters and large video projections showing anime (animated manga) and the work of film animation companies like Studio Ghibli – even a manga café just outside the exhibition for Japanese food and drink!

Crucial to the exhibition’s success are the hundreds of original art pages from the last 100 years. As manga are published in a thick, digest-size format, these artworks are much smaller than western comic pages, and the level of intricate detail and technical ability can be astonishing. Many of these pages are spaced around the exhibitions edges, where it is easier to experience and give time to them than the sometimes-crowded displays in the centre of the gallery space. It’s fascinating to see the use of different pens, brushes and markers, and the paste-ups, scratches and use of correction fluid deployed in what are now considered masterpieces of the form.

The most interesting discovery for me was a page from ‘Shō-Chan no Bōken’ (or ‘The Adventures of Little Sho’), a little-known children’s story chronicling the escapades of a little boy and his squirrel which was first published in the 1920s. The page’s characters, atmosphere and visual style is so similar to ‘The Adventures of Totor’ (the prototype for cartoonist Hergé’s ‘Tintin’ character and first published in 1926), it’s hard to believe that one didn’t borrow from the other.

Moving through the space and reading the many wall texts, what was striking to me was the mutual relationship between Western and Japanese publishing, and the many shared developments in format over the last 100 years. In 1862 a magazine called ‘Japan Punch’ was published, taking its name and style directly from British establishment magazine ‘Punch’, but instead satirising western misunderstandings of Japanese people and their culture. Subsequently Japanese newspapers began to publish large, full-colour newspaper supplements of proto-manga, in the same way that American Sunday newspapers featured the fantastical adventures of strips like Winsor McCay’s ‘Little Nemo in Slumberland’ and ‘Krazy Kat’. Manga publishing as we know it today began in the 1920s, when American comics moved to the anthology format that eventually became what we now consider comic books. And in 1972, when American underground comic artist Art Spiegelman began his long-form comics story ‘Maus’ which documented his family’s experiences in Nazi Germany, in Japan Keiji Nakazawa was simultaneously writing and drawing the ground-breaking manga ‘I Saw It’ about the Atomic Bombing of Hiroshima, both projects inventing their own national equivalent of the autobiographical graphic novel. More recently, manga have dealt with everyday concerns such as homelessness, religious beliefs and LGBT issues, and catastrophic events like the 2011 Tōhoku earthquake and Fukushima nuclear disaster, while recent American graphic novels have investigated a great range of domestic and geo-political issues.

Despite these equivalent formal and publishing developments, though, the visual content of American comics and Japanese manga have remained historically distinctive. In recent years, though, there has been a huge increase in Western artists adopting elements of manga styling, particularly the ‘chibi’ style typified by comics and cartoons like ‘Teen Titans Go!’. Of course, this looking can happen in both directions – recent manga pages in the exhibition bore the strong influence of the hyper-muscular style of 1990s mainstream American superhero comics.

These shifts and absorptions of style and content raise a bigger question. Until around 20 years ago, it was possible to determine a comics artist or illustrator’s national and cultural origins from their aesthetic – from the elements of composition, mark-making, gesturality and myriad other aspects of image-making that comprised their personal visual language. Now none of these origins can be taken for granted. The fundamental question this raises is about the future of design and illustration generally – is the increasing similarity of visuality a ‘good thing’ or not? Some creators and consumers might argue that a globalisation of image-making positively reflects growing equality, while others might argue it’s merely a market-driven homogenisation. If all visual thinking shares elements of other cultures, without acknowledgement of local concerns, national characteristics or boundaries, what happens to the personal, unique, creative voice?

> Next Post What is your tutor up to? Garry MacKenzie