I was first approached to write a book on fashion design for students in 2005 I was at the time working as a lecturer on the Fashion BA at The university of Middlesex. AVA publishing (which is now Bloomsbury) came up with the idea of producing a series of books on design (fashion, graphics, photography etc) called “the fundamentals of”. Each of the chapters in the fundamentals books would then become a series of books called “basics”. It was a very clever simple format that would introduce the reader to basic principles but would also allow these principles to be expanded in much greater depth in the second series.
My colleague at Middlesex, Richard Sorger and I agreed to write “ the fundamentals of fashion”. The book was to be a really contemporary look at the fashion industry including lots of inspiring images and examples of great student work but also to highlight contemporary designers.

We first of all put together a BLAD (book or basic layout and design) that comprised of 2 or 3 double spreads with text and images that gives the gist of the book. The BLAD is used as a preview of the book for promotional use, reviewers, and advance sales.
We needed to work out what actually were the fundamentals of fashion, what were the very key elements we had to cover. We spent a couple of brainstorming days writing ideas on post it notes and sticking them onto a wall, forming the skeleton of the book format. We came up with 5 chapters Richard would write chapters on research and design and construction and I would write about fabrics and techniques and developing a collection. The last chapter would write itself as it would feature interviews with designers and creatives working in fashion.
As well as writing we needed to source all the photographs. We set up a day in a photography studio to photograph images, flat shots of fabrics, sketchbooks, textile samples and also garments photographed on a stand. As we both worked in education we could easily select excellent examples of student work to use. We gathered together vintage garments from our own wardrobes and that of our friends. To find contemporary examples of fashion garments we contacted the PR companies of some of the new fashion designers and borrowed garments from their showrooms for the day. The designers also provided us with some great images “looks” of the garments photographed on models. To find historical images we looked at websites like the V&A where we bought the rights to use the images. A picture researcher at AVA then made checks on each image, ensuring they were royalty free (or organised paying for the image) and was of the right Dpi for publication.

As the chapters came together we worked with our editor to refine and edit them. As a visual person it was hard to understand how the text and images would work together. It was not until we received the initial layouts back from the graphic designer that I could really see how the book was shaping up. We then edited text and images more and moved things around. The next step was to write captions for every image, write an introduction, conclusion and resource list. The book was developed over many design layout changes but finally the grammar, spelling, and images were fully checked in the last layout.
When it came around to writing the Basics series I chose to write Textiles and Fashion which was based on the fabrics and techniques chapter.
Textiles and Fashion was approached in much the same way as Fundamentals, but writing on my own it was obviously much harder. Richard was far more disciplined and organised than I was, but this was something I had to learn. Some of the chapters were very easy to write but others needed much more research.
We were asked to update Fundamentals book in 2010 and I updated Textiles and Fashion in 2012. The second editions took a great deal of work, revising dates, updating designers who perhaps were no longer trading and changing about 50% of the images. Looking at how the book could be better laid out, also the publishers wanted to include exercises at the end of each chapter and put the interviews though the book.

Download a sample of the spread here
Writing books is not something I ever thought I would do. They take a lot of work, much more than I ever expected, but I love the process of research and selecting the images is very creative.
My latest book published by Laurence King is called Fashion Knitwear and I will discuss the different approach to writing this in a future post.

One thought on “Back to Basics” 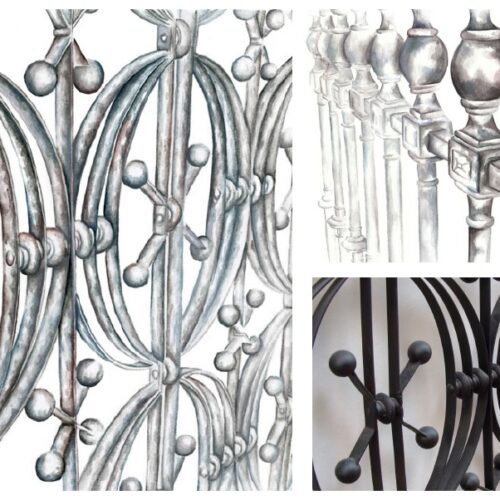 The importance of drawings within my own textiles practice