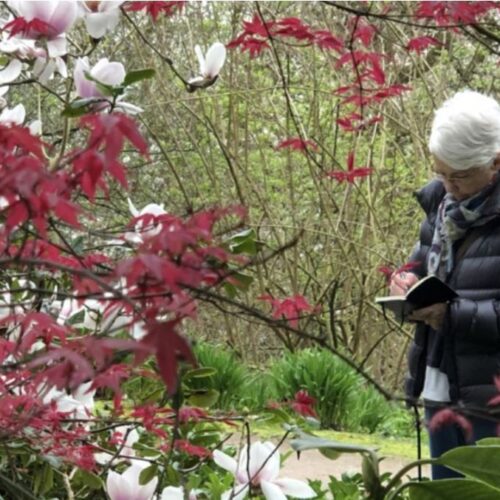 I am heartbroken to have to share the news that OCA student and artist Patricia Farrar passed away at the weekend.

Every single drawing and painting student (and many beyond) has some connection with Patricia as her work illustrates our course units as exemplars of practice. Many of you know her very well indeed as a generous peer and a friend.

Patricia has been studying with OCA for twelve years and I was with her as her tutor for Drawing 1 (the first course) and for Sustaining Your Practice (the last). I have known her for over a decade and feel privileged to have done so. The last time we spoke over zoom she was ensconced in her beautiful studio, speckled with paint, eyes sparkling and grinning from ear to ear. “I’ve done it!” she said. We were discussing her amazing degree show which she had completed and is now online, and her enormous sense of achievement and peace in her relationship with her own painting.

Patricia arrived at OCA whilst still working as a principal in a busy girl’s school. Like many, she had been deterred from pursuing art as a career by concerned parents and now, as she looked towards retirement she was giving herself that chance. I remember right at the outset her saying that her husband was arranging a studio in the garden for her – perhaps that was my first moment of student studio envy! (not the last). Family support is crucial for many OCA students, but so too for many is the garden.

From the outset Patricia’s connection with her garden was intense and creatively potent. She was a competent draughtsperson before she began her degree, making evocative and sinuous drawings from observation with ease. There was a moment though in assignment three of drawing skills where she sent me a dark and powerful small drawing. It had made the paradigm shift from observational research to art. The dark black of the space underneath and behind shrubs was the star of the show and the trees had become geometric girders traversing a dappled green space. It was electric.

Many on the painting degree will recognise that tension, often productive but sometimes not so much, between drawing and painting. Patricia wrangled with that middle ground with more intellectual courage and forensic material investigation than anyone I can remember in my time at OCA. There was a time at level 2 where she reached out to me to say the situation felt impossible and it had rocked her. When is a drawing a painting, what does painting do that drawing can’t? How can the immediacy of the performance of drawing and its relation to sound and thought that she harnessed so intuitively be reconsidered for painting?

During her final graduating suite of studies Patricia wove a complex web of ideas and intuitions together. She had initially wanted to make work celebrating the older person’s creativity and then became interested in sound and birdsong, but a trip back to the Australia of her birth cut across her thinking like a thunderclap. She realised that the colours of the garden flowers in Surrey she was so drawn to were connected somehow to a memory of colour from Australia. Her sense of herself as displaced, as a migrant, as an Australian abroad rose up in her. Her contextual studies tutor Diana Ali helped her form a research plan around this and I was by her side as she worked through how to paint her way into those feelings and colours. The secret we tutors all hide is that we more often than not get as much or even more form having tutorials than the student. It is incredibly energising and exciting to be a part of someone’s learning and to share those moments of insight and passions awoken. Patricia’s intelligence and sense of urgency meant that our conversations were incredibly rewarding for both of us as we considered aspects of painting about which we were both fascinated. She completed her studies with a hard won but totally secure painting practice. She was an artist.

At the end of our recent tutorial Patricia said to me that her degree had been so important to her and she didn’t know quite what she would do without it. I am sitting here just now realising just how important Patricia was to OCA and wondering what we will do without her.

It says something crucial about Patricia that even though she had completely finished her work for us, she offered to write a piece for WeAreOCA about the relationship between Major Project and Contextual Studies to help others understand the level. Last week she sent me the copy for that article and so I am in the position now of posting it here posthumously. Thank you Patricia.

< Previous Post What kind of spatial designer am I? #4 Grant Armstrong