Student work: Sarah-Jane Field - The Open College of the Arts
Skip to content 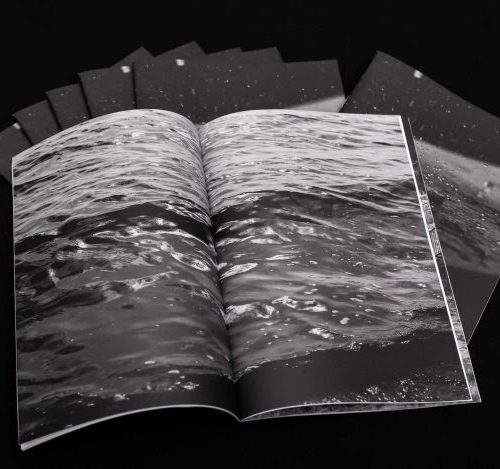 Zine: this family too

Last summer, while watching the world go by from an isolated village in Italy, I was also working remotely on a collaborative project for emerging artists with a group called pic.london, which resulted in an exhibition in October in London. And I was trying to get on with the first assignments for Level Three, Body of Work, and Contextual Studies.

Earlier, during Level Two, tutors had encouraged me to submit work made outside the course for assignments if suitable. My BOW tutor said much the same, so it made sense to be thinking about handing in something from the pic.london project for BOW Assignment Two. I ended up with a lot of artistic threads from that collaboration, including a moving image piece and accompanying stills, two sequences of photography, and some writing – plus how it all came together with other artists’ work in the collaborative group show and research material that emerged from the collective. It would have been overwhelming to hand everything in and perhaps not quite appropriate – although I have recorded the process of making it on my blog. In the end, for assessment purposes, I have chosen a series of black and white images that I took while creating for pic.london but did not include in the exhibition, and have published them with the text which did appear, but in a different way. 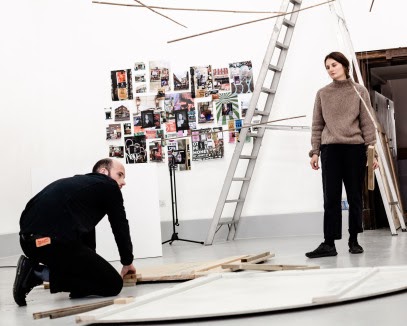 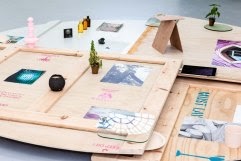 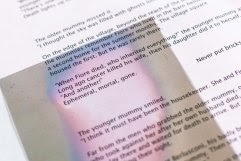 Images from the pic.london group exhibition titled A rumour reached the village featuring collaborating artists: Sarah-Jane Field, Eva Louise Jonas, Michaela Lahat, Rowan Lear, Joshua Phillips, and Christel Pilkær Thomsen. (Images show Joshua and Eva during the installation and the presentation of the same text I have used in the zine alongside Christel’s cameraless photography, installed on a round wooden construction. Further details here)

After experimenting with various options in InDesign, I decided a zine would be the way to go because I thought the images would suit that format. Zines are also an incredibly democratic way of sharing work: they’re relatively inexpensive to produce nowadays as digital printers offer a range of accessible services, although you can make them yourself too if you are that way inclined. Earlier on in the course, I had experimented with placing the same text alongside a different set of images but the combination didn’t seem to say quite what I was after. I chose the black and white series for a number of reasons, not least of which is that I wanted to try and sell this work (to see if I could)  – and whatever anyone says, people outside the world of photography academia (and some inside it) do seem to have a certain romantic attachment to black and white photographs. They also don’t really care whether the images were taken on an analogue or digital camera. They mostly just want to buy something they like. But of course, I want to be able to communicate some of my ideas which can at times be a bit complex. That is why I was really pleased when sharing the work with an OCA group, a tutor recognised my intentions and said, ‘‘Your zine content and layout does a great job of presenting complex ideas in a creative way that’s both sophisticated and accessible’ (Taylor, 2020) 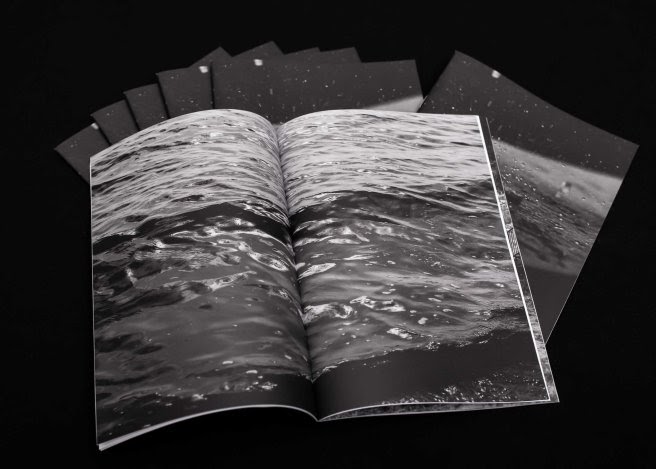 I had, for a while, intended to try and sell a few copies but when the lockdown happened any hope of earning anything as an event and headshot photographer disappeared, so selling the zine became more pressing. Obviously, I won’t get rich selling a handful of inexpensive zines but even so, it feels good to have created something saleable and the proceeds might buy me a couple of bottles of decent wine which will be much appreciated during these strange times.

I learned a great deal while figuring out the printing using a company called ExWhyZed. I have also worked with Newspaper Club in the past  – and am happy to say both companies have been patient and generous with their time and advice. Don’t be afraid to approach companies with questions. It’s in their interest to get things right for you.  As my final BOW work is likely to be a book and/or a zine, albeit somewhat different to this one, I feel more prepared about how to best approach that now.

Although the zine emerged from the pic.london project, it is ultimately a work in its own right and I’ll be submitting it as part of the development which informs the final BOW project, yet to be completed. It shows my practice – which has evolved to be a hybrid that often includes image and creative text, and demonstrates publication skills too.

If you would like to buy a copy of the work, it is available to purchase here. Do let me know what you think of it.

And if you would to look at the zine’s circuitous development in more detail, you can visit my Assignment Two blog posts here.