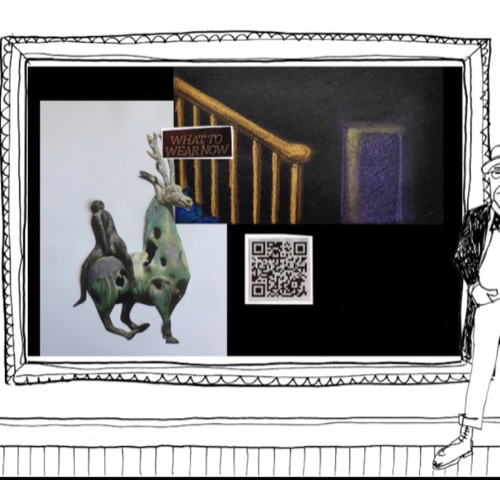 Stuff that spins out of now

At the beginning of October 2020, Helen Rosemier organised a Momentum Session with the theme Contamination/Curation, which was led by tutor, Bryan Eccleshall. Open to OCA students from all disciplines, the idea was to split all participants into groups of five with the brief of creating a curatorial proposal for an exhibition comprising works submitted by the artists in the group. To add a layer of extra creativity to the task, it was suggested to introduce a degree of contamination between the pieces put forward and between the artists’ different practices. There were three weeks to complete the task.

The video presented here is the outcome of the collaboration of five artists who had never met before:

The first challenge we encountered was to get to know each other fast and establish a balanced working relationship where people could contribute equally and feel heard and valued. We understood quickly that the lack of time required lots of compromises; we soon agreed we were not aiming at anything perfect but we wanted to experiment and learn as much as possible. Overall we arranged four one-hour Zoom meetings to complete the task. We started by using a Padlet to share our works and soon identified a strong common thread of contemporary issues running through them: environment, power, Covid, inside/outside. The title of the exhibition sprung fully formed in the first meeting and remained unchanged.

The contamination theme seemed to interest us from the beginning, starting with the idea of using the surrealist game of ‘Cadavre exquis’ to produce new collaborative work. Simon mentioned a computer programme he had designed to randomly pair images selected from a large library, and we decided to try it out by inputting lots of our pieces.

At the same time we were also thinking of the curatorial side of the exercise, and Hugh offered to produce a catalogue of the final selection of works. We introduced text from current newspapers in several languages, to reflect different nationalities among us. We did produce new pieces, some of them more developed than others. We exercised a degree of choice together with the randomness of the main process. We worked fast and kept reminding ourselves that we were not interested in a polished outcome. As a group we were lucky and grateful for the technical expertise that Simon and Hugh provided, and also curious about the specific direction imparted to our project by their input.

Undoubtedly we concentrated more on the contamination aspect of the task, as it seemed to us a more fruitful avenue to pursue in terms of personal artistic development. The video presented here is only its more recent version rather than a ‘final’ one. We didn’t particularly get anywhere but have been on a very interesting journey. We have found the collaboration enriching and stimulating and have agreed to continue meeting to support each other and exchange ideas.

3 thoughts on “Stuff that spins out of now”