Student stories: Annalisa Mercuri - The Open College of the Arts
Skip to content 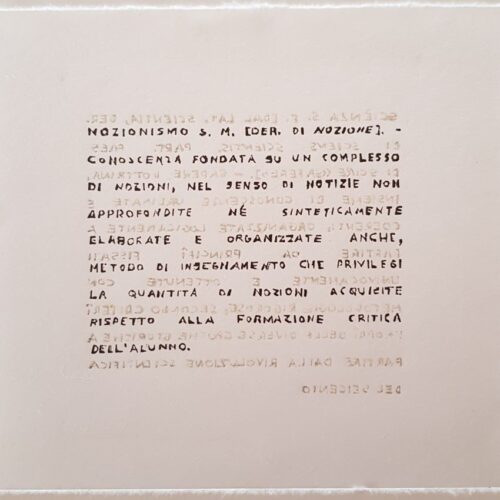 Annalisa Mercuri is a Level Two Painting student who is about to complete the Drawing Two: Investigating Drawing unit. Despite some severe lockdown restrictions (she lives in Verona) she has managed to have work accepted into a couple of prestigious group shows over the past year or so. In this short interview, her tutor Bryan Eccleshall asks her about that experience.

You’ve been entering work made while studying to group shows. Did you think you’d be quite as successful as you’ve been?

I have applied to two different group shows south of Rome (Italy) with the same work: a woodblock print I have made for assignment two of Investigating Drawing. I had no intention to apply to these calls. But I have felt that the work I have made was fitting with one of the calls and possibly also the other. Yet I didn’t expect much to be honest. The theme of the first call was Yin and Yang, complementary opposites organized by StudioLab 138 (an organization aiming to bring art to the suburbs and also to support new/young artists), while the second call was Light and Darkness organized by the Byzantine-Greek Monastery of Grottaferrata (a millenary monastery known for restoration of ancient books and manuscripts).

When the organizer of the first group show saw the work, she strongly advised me to apply also to the other call. I was not sure I could apply to both with the same work, but there was nothing in the regulations against it, so I have sent my print also to the second call.

Tell us a little about the work itself. What were you trying to achieve or get across to an audience? Do you think that was achieved?

The work is a woodblock print titled Dunning-Kruger. For assignment two we have to represent a subject using the subject itself. I was inspired by the work of Cornelia Parker: she often creates works using peculiar materials, like in her works Poison and Antidote (black and white ink made with snake venom and its antidote), or Pornographic Drawings (made with dissolved confiscated tapes). She also made embroidered definitions of opposite words, made by prisoners. Inspired by her idea I decided to make a print of the definition of the word ‘Sciolism’ (‘Nozionismo’ in Italian) in black and its opposite word, ‘Science’, using a homemade ink made by transparent ink and a fluorescent pigment. The work aimed to represent the infodemic that has occurred with the diffusion of the internet and exploded during the start of the COVID-19 pandemic. The idea was to represent the definition of Sciolism in a visible manner, meaning that to find information is something easy. Everyone can find any kind of information in a few seconds. And this is something visible. But to be able to correctly process all the information, a person requires experience and to study for many years in that specific field. We are all used to having everything now, but most things do require time to build up experience and knowledge. One can´t become a modern Van Gogh after watching a 1-hour video on YouTube. This was the idea behind the writing of Science in transparent fluorescent ink: a person would see something juxtaposed to the Sciolism definition, but an effort from the viewer is required to reveal the full work. Light should be switched off and a mirror used to decipher the writing. An homage to Leonardo da Vinci and to the ancient Greeks. I have always been fascinated by the Greek language and philosophers. The past tense of the word to see had the meaning of to know, because for them to have seen meant to have observed, and therefore to have gained knowledge. Observation is what scientists do, so the viewer should act like a scientist and must thoroughly look at the work to understand it. That’s why I called the work Dunning-Kruger: it is a cognitive bias for which experienced people underestimate their capabilities, while inexperienced people overestimate their competencies.

Seeing your work alongside the work of others can be quite strange. How did it feel to be curated? Did it change anything about the work or how you saw it?

Unfortunately, I was only able to see the work in one of the two exhibitions last September, namely the Light and Darkness one. The Yin and Yang show was postponed due to the COVID-19 restrictions, and I was unable to go when it showed last month. Again, due to the COVID-19 the works were all exhibited in a quite small room, so they appeared a bit overcrowded. I have to say that there were so many beautiful works, and mine looked so simple and different from all the other works. I saw pictures of the Yin and Yang exhibition and since all works had to be framed using the same specifications, the effect was more harmonious. An appropriate curation of my work would have been too complicated for the organizers, so it was displayed in a standard manner.  This impacted negatively the work, as the fluorescent effect was not visible for the viewers of the exhibitions, but perhaps only to the two jury members.

As well as being included in shows, you’ve managed to win stuff. That must feel great. Tell us how it’s changed your attitude to your practice?

That was really unexpected. With the same work I was able to win both competitions. For Light and Darkness my work was selected along with three others, and we each won a one-week residence at the Monastery (now postponed to next year for safety reasons). While, for Yin and Yang I won the expert jury prize and I have won a solo exhibition (some pressure building up now). Sending work for a call pushes you to make a self-standing, complete work. For me it is also a way to ignite and converge ideas on how to “solve” some of the OCA exercises. I think that combining the two, with time, can also be a way to help find a personal voice. We need to observe and explore, like scientists do.

Wow. Congratulations. Do you have any tips for other students who might be thinking of entering their work into ‘open call’ events?

My tip is to try. Worst case one will not be selected. It’s nice to show your work to people that are not fellow students or friends or family members. While studying with OCA I have discovered that I want to make works that have a message. I have found that, even if it is scary, I have to convey my messages, otherwise what messages would they be? And it is scary to show your work to outsiders. But maybe you will be surprised to hear or see how others react to your work. These reactions might not be what one expects. These calls were free of charge; I only had to cover the shipping costs. I am getting addicted to applying to calls. It helps pushing my limits, and if selected I have an opportunity to show my work. It also helps to build up your CV.

But I have not always been so lucky. I have applied another two times at the StudioLab 138 calls, and I have arrived among the top 10. I have also tried to apply for a couple of big calls too, and I have not been selected. Even if this can be disappointing, I didn’t feel it undervalued my work. On the contrary, I have found that it pushes me to try to do better. And it doesn´t stop me from trying again. Who knows, maybe I could be lucky next time.

Sometimes I read a call theme and decide not to apply, but then the theme sticks into my head, and out of the blue an idea comes… so why not? Especially if they are free. For example, at the end of this month there’s a free call made by StudioLab 138 with the theme Entropy, for displaying self-supporting installations in institutional locations (Civic Museums, Historic Palaces, etc.). I was not interested, but then, all of a sudden, I had an idea that perfectly fits with the call and that develops a theme I have just started to explore as a side project of my Drawing Two course. And I have just discovered what it has in common with my parallel project…

> Next Post Six Examples of Why Line Weights Matter