Student stories: Alistair McIntyre - The Open College of the Arts
Skip to content 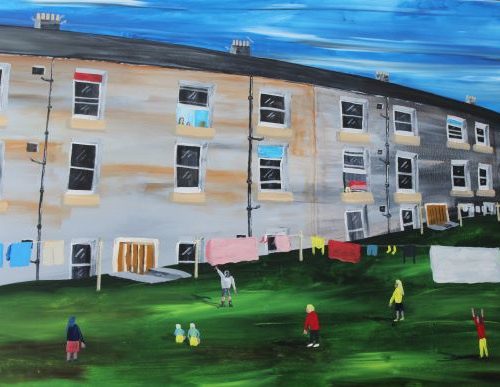 In the 1990s I was diagnosed with a severe mental health issue and although treated with medication and enjoying most of my time in a well condition I occasionally have some time when I suffer from anxiety and depression.

It was during one of these times that I forced myself (I say forced because I really found it difficult to do even the most minor of tasks) to start a painting. I knew creating things had a positive benefit on mental health and I used it for such, but never before had I been so low that I couldn’t find any motivation at all. I usually put a brave face on and carried on. Anyway I had the materials and I had been contemplating an idea from before I was feeling like this so that was my starting point. I drew (if you could call it that) a very rough sketch which took me about 5 minutes. I then got a canvas and instead of marking it out as I had so often done I decided to just paint. I painted the sky and blotted out an area which was hard going but I persevered and worked on. I found that time slipped away from me and I got lost in the process. Who cares what this turns out like I’m finding me again I thought and carried on and before I knew it was dark. It was the same the next day, same painting and a little easier to get started, until its completion at the end of the third day, when I felt like my old self again. The finished painting I liked but that wasn’t the important part. It was the process. The subject was an imaginary scene from my child hood and it changed a few times as I painted and finished a joyful scene. The lesson I learned was that the creative process can greatly affect my mood and just as much if not more than when I look at other artists work.  Whatever platform that might take; music, writing, drawing, painting, sculpting, whatever creative outlet you use remember the process of creating can and will affect your mental health and wellbeing sometimes more than we realise and in a positive way, because as artists we need to create. 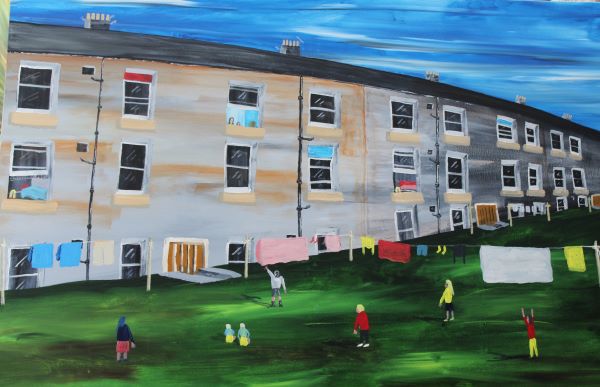 > Next Post Photography and digital assessment – a wider picture