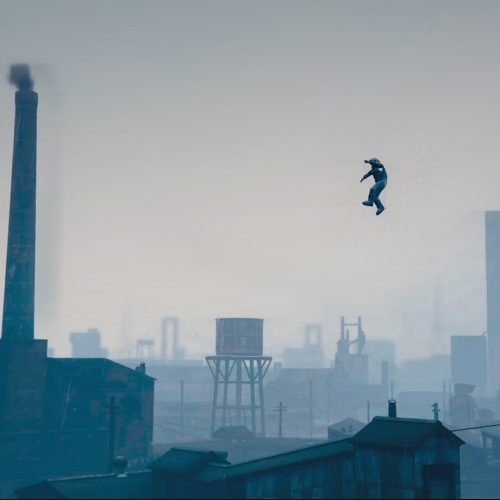 Virtuality in a plastic world

Thirty years ago Andy Hughes (OCA Photography Tutor) walked out of the sea after surfing and noticed a brightly coloured plastic detergent bottle at rest on the seashore. The product was called Radion, made by Unilever, which is now defunct. It was the late 1980’s, he was living in Cardiff studying Fine Art whilst three hundred miles away his mother had been diagnosed with a brain tumour and was receiving radiation treatment. The treatment’s efficacy was measured and visualised in scanning systems which used highly colourised imagery. Hughes noticed the visual and conceptual similarities between these two elements; radiation used on a human brain to kill/wash away tumour cells and the discarded plastic detergent bottle and its contents designed to remove dirt and stains, both seemed connected.

Fast forward thirty years, we are becoming increasingly attuned to the damage that plastic and the chemical components within that disrupt the human endocrine system, lurking in everything from cleaning products to fragrances. Many artists and visual art students have recently become attuned to this particular environmental crisis, responding in a myriad of ways.

In a recent conversation, Hughes said “Throughout my career, I’ve always had a sense of prescience, a sense of knowing or suggesting with some certainty what might happen in the future. Looking back to my early works in the 90’s those images I made of sewage waste, plastic and other washed-up beach detritus seem to be perfect examples of this sense. Our experiences past and present coexist, by looking at the past we can sometimes see the future more clearly. By imaging the future we can potentially change course and the trajectory of ourselves and the environment around us”.

In 2002 Hughes began playing the video game Grand Theft Auto III, playing each new iteration including the latest online GTAV. Hughes noticed that the game designers began to add various items of litter amongst other detritus, in later versions pollution and waste became much more prominent. He became attuned with various kind of symmetries and connections in the virtual and real-world which reminded him of those same connections between the radion detergent and radiotherapy.

Earlier this year Hughes was awarded a grant from the University of Plymouth’s the Sustainable Earth Institute. Working in cooperation with Dr Mandy Bloomfield and the English faculty students at the University of Plymouth he created a video machinima with the Game Grand Theft Auto V. Hughes began to think about the potential that this game might in some way be concealing a series of environmental messages, could it be charting the advance of global warming and the accumulation of plastic waste on land and in our oceans? By combining in-game footage and public service information films from the past 100 years, his film explores and shares new perspectives and approaches around plastic pollution, the Anthropocene and sustainability. It encourages the viewer to suspend the game’s known themes around gang violence, car theft and racial stereotypes by instead bringing relationships between climate change, landscape and environmental subjects to the fore. The result is an irreverent and often satirical look at plastic pollution, its historical roots and connectivity to petroleum and its interconnections.

“Very few directors have tackled the complex relationship between environmental issues and digital games. With Plastic Scoop, Andy Hughes makes that connection painfully manifest. By appropriating both the aesthetics of video games and the language of vintage promotional videos and other archival material, à la Adam Curtis, Hughes reminds us that have become aliens to our own planet”.  Matteo Bittanti https://www.gamescenes.org/