Student work: Krystyna Dembny - The Open College of the Arts
Skip to content 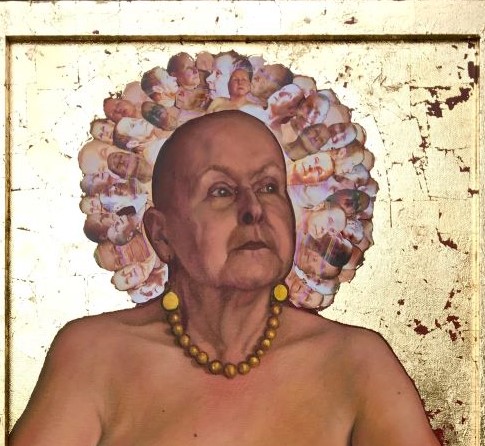 The Invisible Woman made Visible

The idea for the project came by chance on receipt of a fridge magnet given as a present: the image projecting the Guerilla Girls; a group of feminist activists asking the question: “Do women have to be naked in order to get into the Met Museum?” It appears, only 4% of art works are by women, but 76% of nudes on display are female. This made me wonder how much of this naked female flesh was menopausal: answer, 1or 2, but none on display. It seems, take away youth and fecundity, and the maiden/mother becomes a crone, and her body is banished to the realm of invisibility in; art, film and advertising. As Bette Davis succinctly put it; “Old age ain’t no place for sissies.”

I too, inculcated by the cultural norm, had balked at painting the naked or semi-naked female older body, when the opportunity had been offered in the past by my friend Sally. Sally, the absolute antithesis of a ‘sissy’, Sally, a woman with chutzpah, who had just been diagnosed with a recurrence of her breast cancer and who, when I finally decided to grasp the nettle and face my own mental discomforts, was more than happy to become my exemplar of the naked post-menopausal: “Invisible Woman made Visible”.

Sally was to be my avatar for the older female, the one standing in for the multitude. I was aiming to represent the general through the specific. Sally and I were drawing the naked post-menopausal body centre-stage, so that the divested figure could confront: challenge and even discomfort the viewer. Our collaboration drew out the importance of ‘realism’ for Sally, eschewing the ‘painterly’, in order to foreground the subject and background the artist. We planned canvases and poses. We discussed textiles and much later the inclusion of a ‘friend’ to create a naked duet.

Within two months of the project starting, Sally’s cancer had invaded bone. Chemo was shaving her head and weight was slowly dropping away.

Wanting to move away from canvas realism I turned to pottery with the concept of making ceramic pots, which would hold the stones that Sally was in the process of shedding.

One pot led to the second, and it was as I was tackling the third that Sally died suddenly.

I continued to make pots. It was as if the clay, moulding it, cutting into it, created a haptic connection to Sally. I also began to realise that for some time the focus had shifted from the objective to the personal. Quite unconsciously, I had begun to make works that were about Sally. The ‘kimono’ I suggested, was to be made up of naked images of Sally and she would pose partially exposed; the naked enclosing the naked, except, even as the idea formed so did the notion of a shroud. The pots too, became burial urns.

Some pieces continue to have a ‘dual’ personality, such as the diptych: “Do Not Touch”/”Do Please Touch” and the naked duet, In It Together, which Sally had planned (her last Text to me) and which her friend Catherine later fulfilled. The penultimate ceramic piece carries images of Sally’s ‘Event’ (funeral), where her naked portraits were displayed: The very visible Sally, naked to the end.

The project moved past the representation of the ‘naked older female body’ as a confrontation. For me it brought home the power of the spirit and, whether young or old, we are far more than just physical beings to be objectified as pleasing cultural paradigms, or damned as abject when failing to do so. It has been a very special and enlightening journey of shared adventure and friendship. 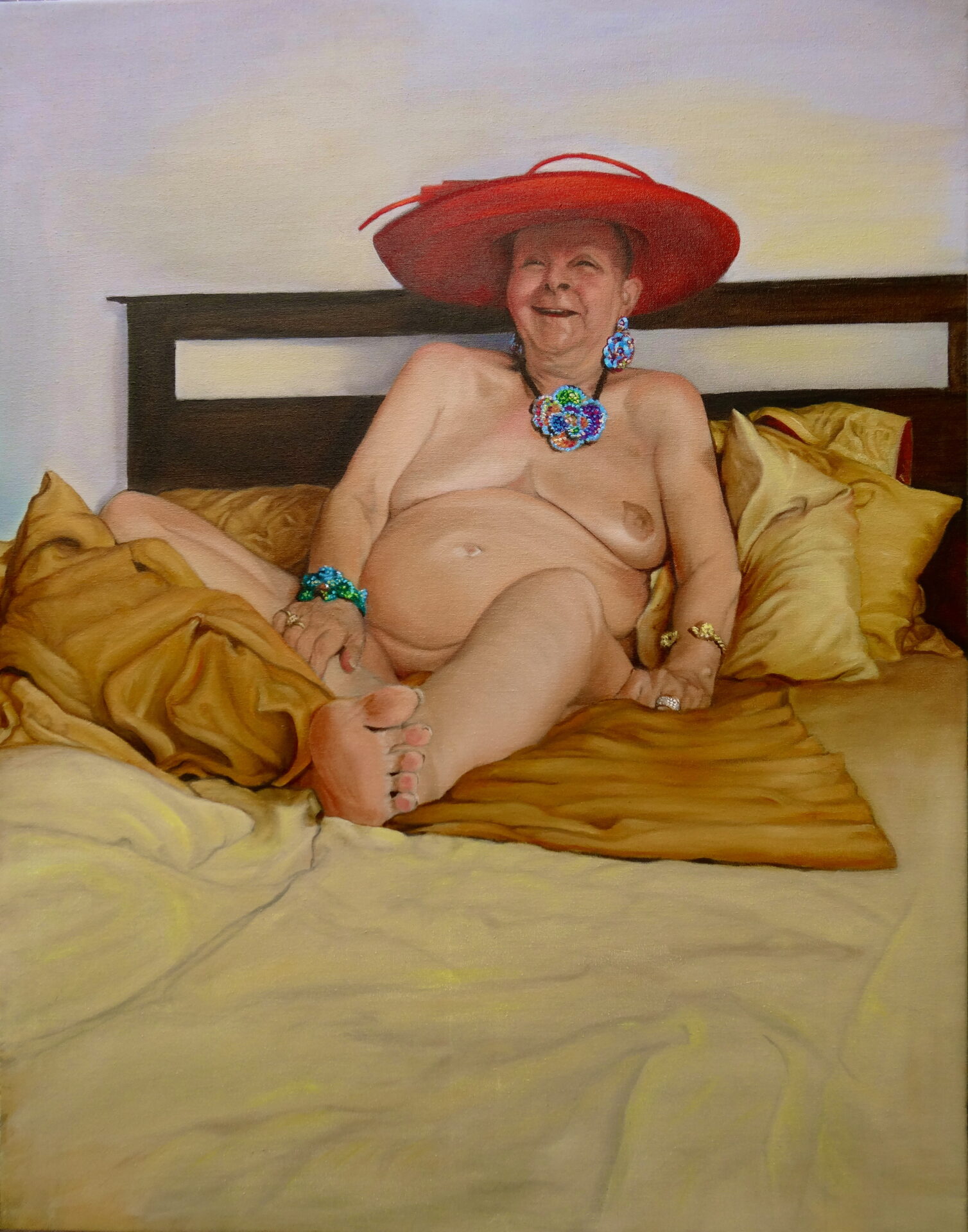 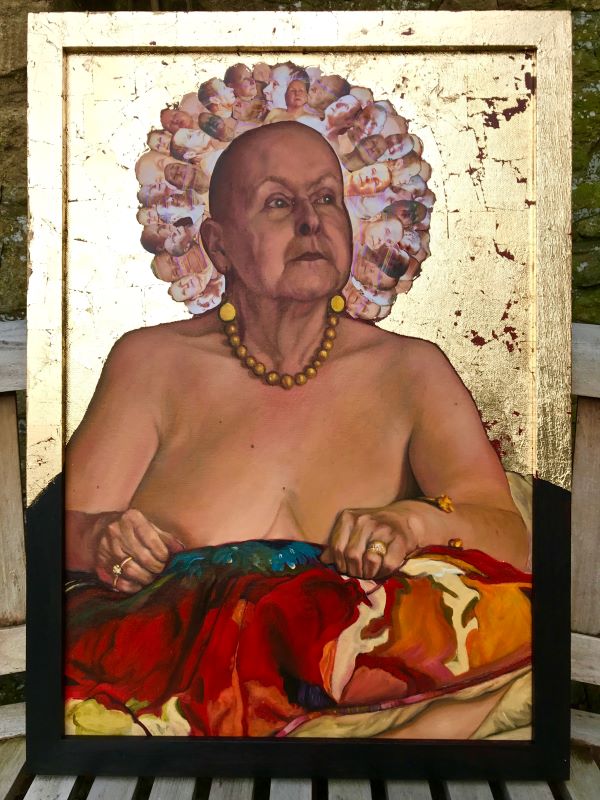 Title of Exhibition: The Invisible Woman made Visible

Journeys have a beginning and an imagined destination and my endpoint was the Painting degree. I took a shortcut early on as I was exempted drawing and painting 1 although the History of Art module was mandated. I think this module was the foundation stone of all that followed; academic, yes, but what I took on board was the realisation that artists who innovate are fearless, they take chances, they question, they experiment. These are the ingredients of creativity and although I showed reticence in the drawing 2 module, by the time I embarked on Mixed Media, my wonderful and supportive tutor told me that my work was ‘not safe’. Little surprise in that opinion; what with a crucified pink skeleton on a pink tree with tiny pink toy soldiers hanging from ribs and other skeletal parts or pickled chicken’s feet in vodka and many other crazy imaginings. The History of Art module gave me ’permission’ to push boundaries of my and other folk’s expectations. It also gave me grounding on how to write essays and how to research.

With the arrival of Level 3 I finally decided to actually start painting, this being a Painting degree. Those who have faced the blank wall that was suppose to hold all the brilliant ideas for the Major Project and Contextual Studies, will understand that kernel of fear that; ‘this is it’ and ‘I haven’t a clue’. Luckily the subject (Sally) arrived at my door, literally, and the most important part of my journey started, not alone, but with my friend and collaborator at my side for half of the final lap before I lost her. During her time with me batting ideas back and forth, I learnt much: about painting, about catching more than a likeness, about ceramics and fabric printing but most importantly I learnt about human resilience, courage and laughter. I learnt that art can have a platform to say some important things on societal attitudes and cultural prejudices. Will Gompertz has called such art ‘Social-activism’.

What have I learnt during my seven years (or will be when I finish this last module) with the OCA? To join in with peer groups and for someone, seen as reclusive, this has been a valuable source of multi-disciplinary feedback, encouragement and friendship. I miss the physical group meetings but like the Painting and the SYP peer Zoom sessions, I stay connected.

I have also learnt that tutors are of vital importance for developing knowledge and training ‘the student’s own voice’. I speak for myself when I say, I have had the most brilliant and inspiring tutors throughout my time with the OCA, with significant mentors being Michele Whiting and Bryan Eccleshall.

It has taught me that I have staying power, that I can take chances with my art. It has given me confidence to go out into the world and sell myself or rather my artistic vision. I still have huge wobbles and a realisation that this is a start on a very long learning curve, which will never really end, but I have been given standards and a broader horizon to look towards.

> Next Post Writing in 2020: Multimodal writing and the pandemic