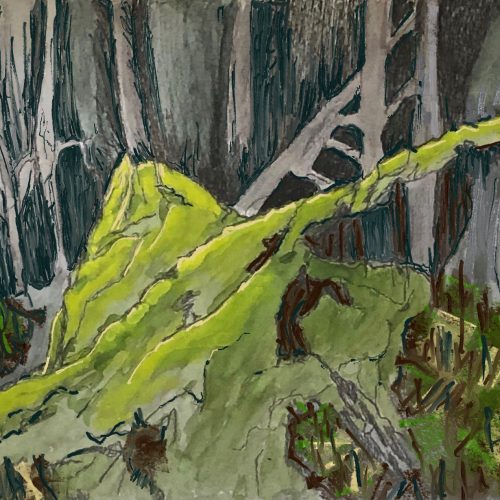 Cathie Lloyd has just completed Painting 2: Concepts in Practice while studying for a Painting Degree. While studying this unit she has developed a method of making that incorporated traditional drawing and painting techniques with those offered by digital image-editing software. Her tutor, Bryan Eccleshall, asks her a few questions about this workflow and how it has impacted on her approach to making and thinking about that making.

You’ve just completed Level Two of the Painting Degree. During the final unit you’ve developed a mixed approach to image making that uses digital editing and more traditional methods. Could you explain why this seemed necessary and roughly what you might do to create a picture?

After reading about contemporary artists use of technology (particularly that of David Hockney) I thought that using iPad apps like ArtSet would be an interesting approach when trying to overcome logistical problems especially making plein air work. The pain and fatigue that goes with the Rheumatoid Arthritis which affects my strength and mobility can be restricting, but I have found that the iPad gives me easy access to a range of effects without being encumbered with a lot of equipment.

As I began working with this software I realised there were a number of distinct advantages. I didn’t abandon working with paint and brush (or fingers), but I could photograph my ‘analogue’ work (in graphite, watercolour, gouache or acrylic), load it into the iPad by photographing it, and work on it further in the ArtSet app which emulates oils. I realised that I could make several iterations between the analogue and digital, so that the distinction between the two became lost. But the paintings on the iPad were vibrant, emanating light rather than reflecting it, giving the digital version a distinct appearance which the print edition can only approximate.

Another advantage to this way of working is that the size of this digital work is indeterminate. The only limitation is the size of the pixels but even something which is greatly enlarged would be an interesting thing to do – rather like in Sigmar Polke’s or Gerhard Richter’s hallucinogenic work.

So my method of digitally manipulated paintings gives me a lot of scope to make work differently.

Does the method of making have any relationship with the subject matter, or is it a purely practical solution to a practical problem?

I make my work in two places, on the West Coast of Scotland and in Edinburgh so I live in two very different environments. Some of the work I make in Edinburgh is based on my memory of the light conditions, the colours in Wester Ross. Photographs of the original site are a limited record but do provide some clue to what I see. But the shift from analogue painting with pigment and brush to the digital iPad work somehow mirrors the back and forth of my life and interaction with what I paint.

Has the method you’ve developed thrown up any happy accidents?

I made a number of sketches and drawings of one outstanding stump in the Lael forest which some people had festooned with decorations at the New Year. It seemed attractively pagan. I found that the weathered texture of the stump as it was breaking up produced an interesting series of lines which I could manipulate on the iPad. The changing colour of the fungus growing on it suggested a depth of hue which I could enhance using the iPad oils while retaining the more transparent layer of the watercolour I had made by hand for the background. When I tried to manually add a layer of acetate to the digital print, I found that I had created something unintended: a section on the left hand side didn’t cover the painted surface, but I liked the way it complicated the picture, and referred to the method I was using. It seemed to be a ghost image which might suggest another subject or image trying to emerge. In my mind, it was also particularly relevant for this subject matter as it emphasised its transience.

Does this mean you’ve found a way of working that you can carry forward onto Level Three?

I certainly plan to continue with this method and to try to develop further my experiments with layering. My control over the digital manipulation has only just begun, for instance I could work on transparent or opaque layers using Affinity Photo. Until now I have been casual in documenting the various stages; this I think would be useful to evaluate which combination of analogue/ digital works best for me. My subject matter can extend to urban parks (like the Edinburgh Botanic Gardens) and I would like to record the way in which the tree stumps gradually come back to some sort of life.