Spellspheres: Part 2 - The Open College of the Arts
Skip to content 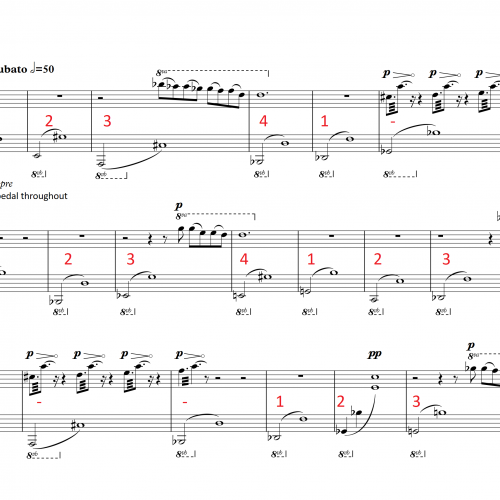 Due to COVID-19, and the necessary lockdown, I have had a large number of concerts postponed or cancelled. I decided it was important (for my career and my sanity!) to stay as creative as possible, and so I begun looking for opportunities to have my music played by others. I found the wonderful project One Page Pieces https://www.facebook.com/onepagepieces and decided to write a new Spellsphere for Adam Marks.  (I’ve written about Spellspheres in a previous blog https://www.oca.ac.uk/weareoca/music/spellspheres-1/ )

Here’s the score and recording: 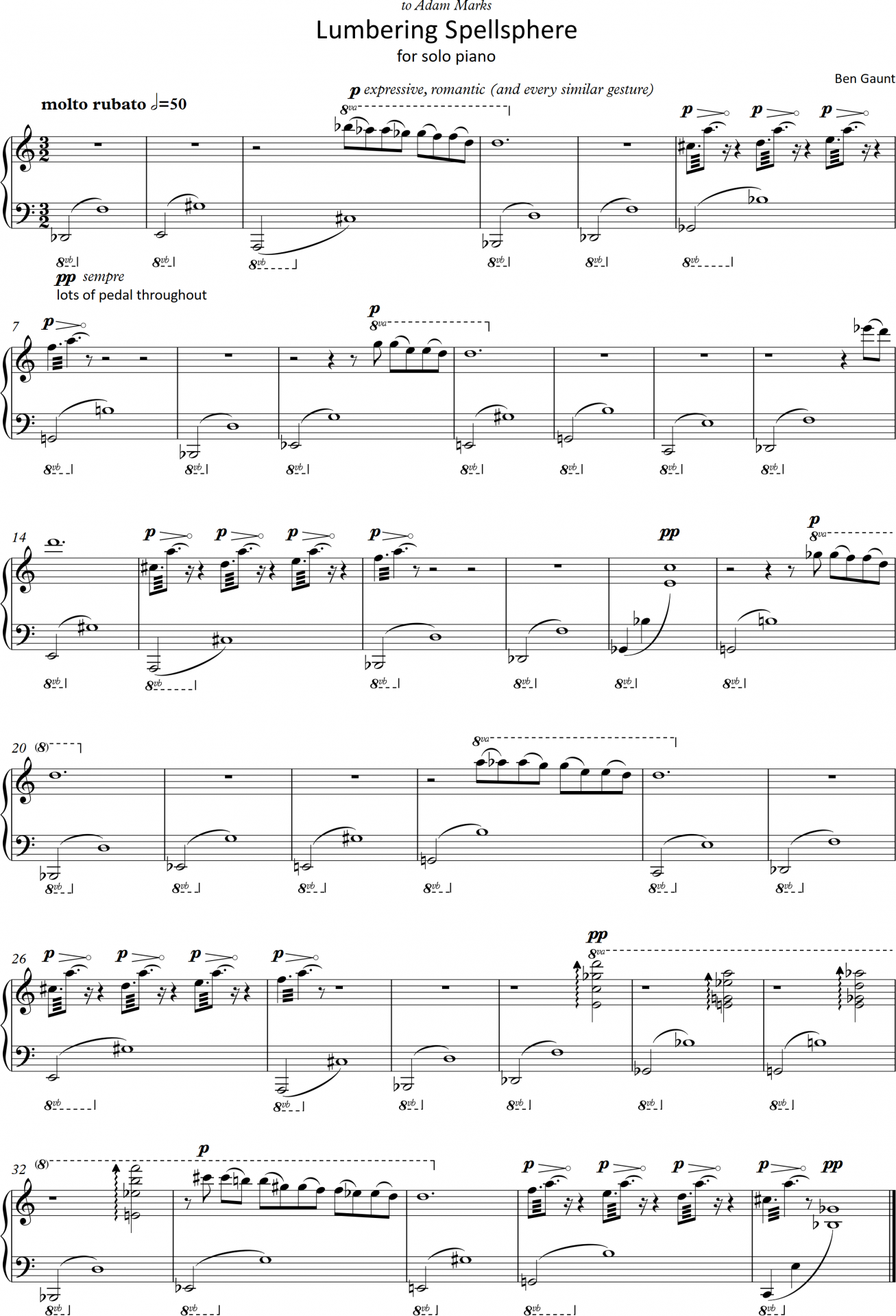 I think the piece sounds rather natural and uncontrived; however, its construction is the result of a number of mathematical processes.

Firstly, I began with a chromatic scale. 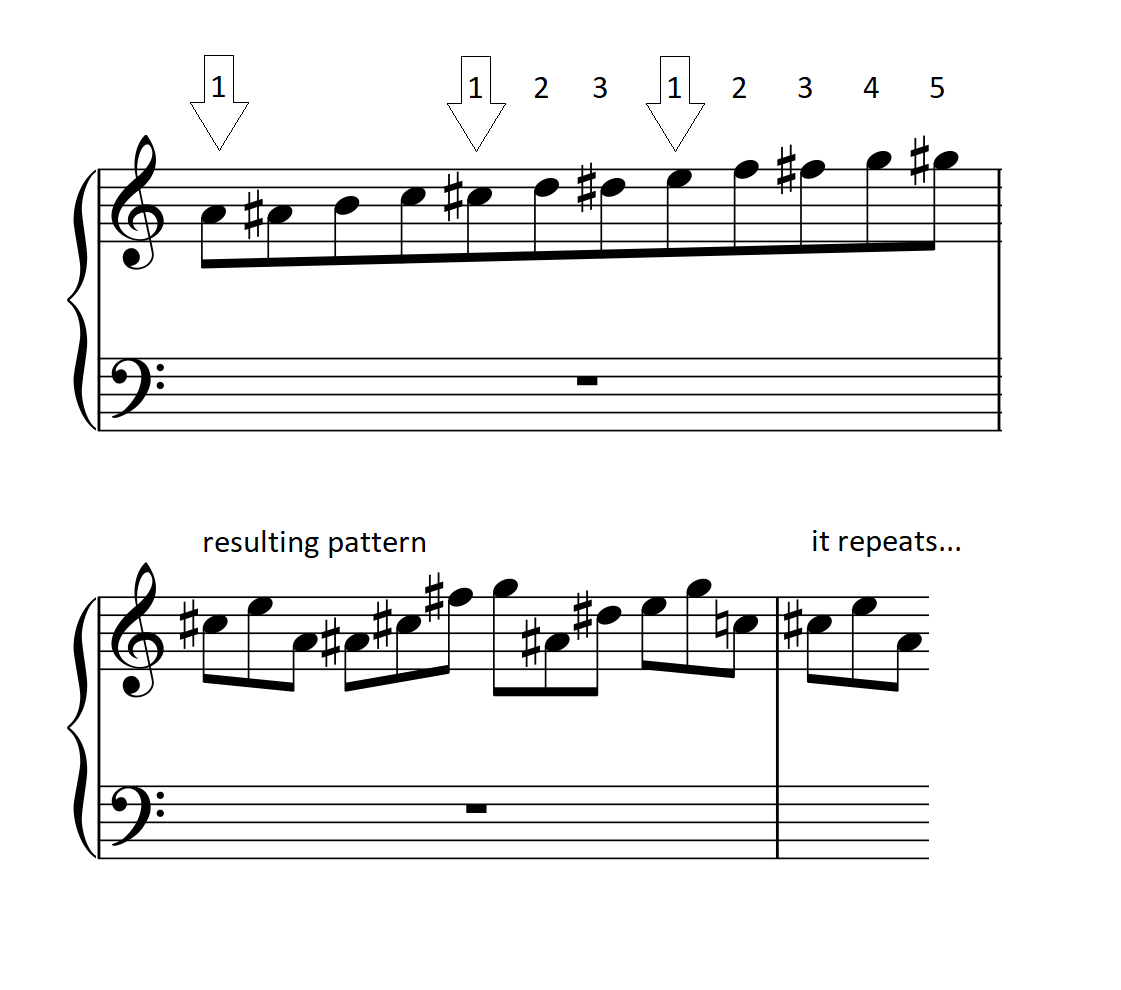 Each of those notes is transformed into a very slow waltz pattern in 3/2. I shift each note down a few octaves (so it functions as a bass note), and each of these is followed by a note that is two octaves and a third higher. This becomes a 12-bar accompaniment, which I repeat three times, resulting in a 36-bar piece. This is, basically, the entire left hand (albeit with two very simple deviations which occur at exactly bar 18 and bar 36). The relentless major thirds imbue the accompaniment with a sense of stability and tonality, however the mathematically constructed 12-bar pattern provides subtle unpredictability. 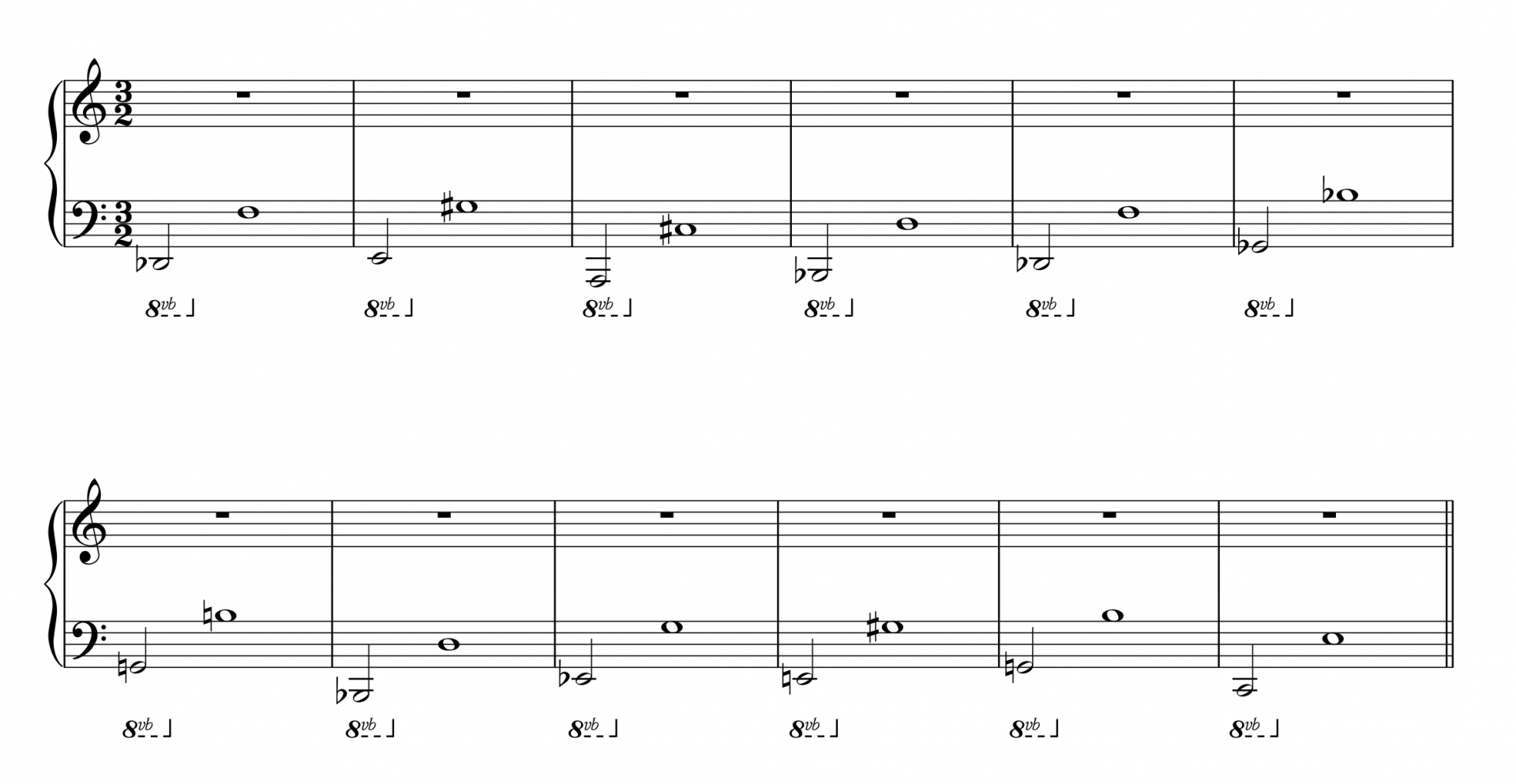 I divided the 36 bars into four parts. However, rather than opting for 4 equal parts (9 bars in duration) I opted for a pattern that subtly oscillated; 7, 9, 11, 9, and divided the piece into four sections of these durations (the first section is bar 1-7, the second section bar 8-16, the third section 17-27, and the fourth section 28-36). I then composed a small tremolando idea that occurs at the end of each of these four sections.

As this tremolando idea occurs 4 times, and each iteration lasts 2 bars, a total of 8 bars have been ‘filled’ with music, leaving 28 right hand bars empty. I divided these 28 bars into 7 sections of 4 bars each, and placed a descending gesture on the 3rd and 4th bar of every 4 bars. You can find them if you look at the score and count each bar “1, 2, 3, 4, 1, 2, 3, 4…”, and if you omit the tremolando bars, the descending gestures will always coincide with the “3, 4”. 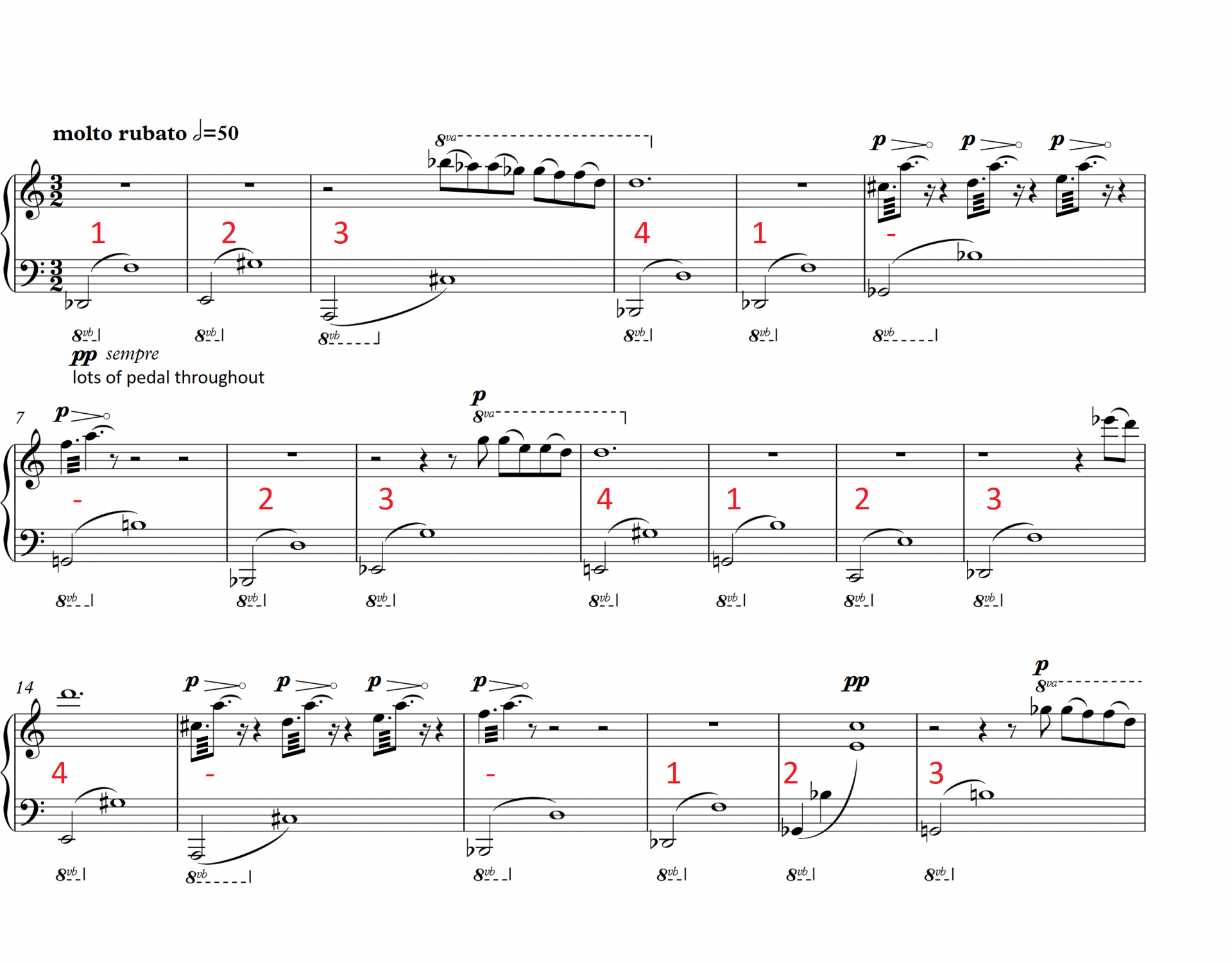 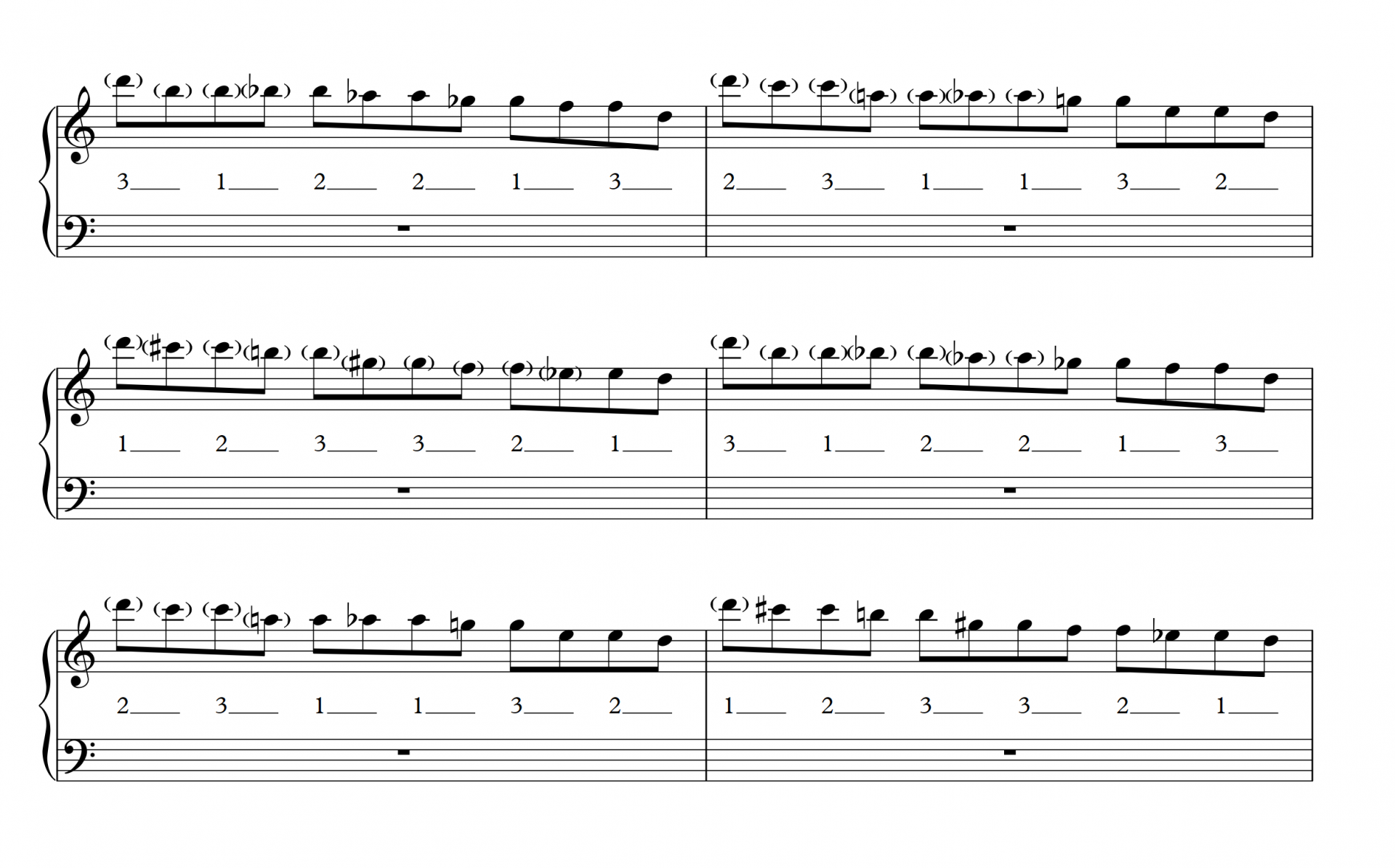 Please, do look at the other recordings at One Page Pieces; my piece was submission number 22, so there are plenty more compositions to delve into!