In conversation with: Robin Haigh - The Open College of the Arts
Skip to content 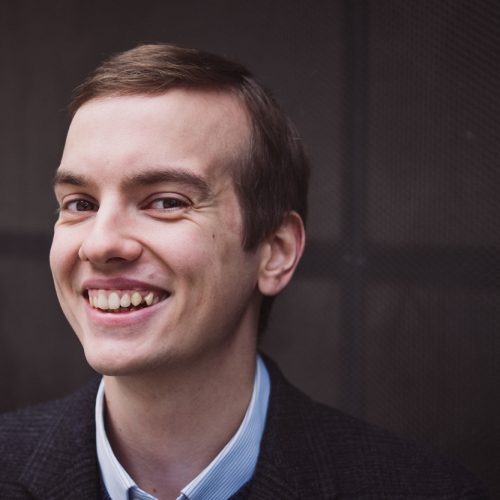 In conversation with: Robin Haigh

Robin Haigh is a composer from London. In 2017 he became one of the youngest ever recipient of a British Composer Award at the age of 24. As well as being commissioned by the UK’s most prestigious ensembles and institutions such as the LSO, Britten Sinfoniaand Sage Gateshead, he has collaborated closely with leading ensembles of his own generation including the Ligeti Quartet and The Hermes Experiment.

They do vary a lot, but there are some things I’ll always do that make up a fundamental part of how I work. Usually, the piece begins at the conceptual stage, where the instrumentation, duration, and performance situation will inform my thoughts around how the piece could relate to any number of non-musical or directly musical ideas. This will often involve latching onto a very specific concept, like “this will be a piece about the way these dogs sound”, or “this will be a piece where orchestral performers double on recorders”. I feel like pieces need a really clear hook like that to stay in people’s memory.

These ideas will float around in my head until it’s time to get to the nitty gritty. At this point, if the piece is to be over 6 minutes, I’ll draw out a very simple plan to work from. With shorter pieces, I prefer to free-wheel and see where the material takes me.

Then, I can begin with the notes. I always try to come at this without having to fear the “blank page”, so often the musical materials can start be notated straight away, as they come from a transcription of something else. Where this is not the case, I’ll start by plagiarising something of my own and seeing how that sits with the instruments involved. Essentially, anything to start getting notes down as soon as possible!

From then on, the process consists entirely of putting things into Sibelius, listening to them on playback, and evaluating what I hear. Sometimes I’m lucky enough to have a workshop or two before the performance, but I’ve generally found that Sibelius’ playback, bolstered by the Note Performer add-on and my own knowledge of how instruments work have been pretty realistic in terms of preparing me for what the final result will sound like.

So yes, in short I do have a fairly standardised working method at this point, which has come from about seven years of trial and error and gradually becoming more efficient!

It’s one of the biggest things I think about. It can feel like contemporary classical music has a “language” that many, many composers speak, a certain set of sounds and gestures designed to make the listener aware that they are listening to contemporary classical music. This is something I really try to avoid; I want my music to be able to give audiences experiences they haven’t had before, rather than just hearing the same piece they heard last week with the notes in a different order.

I know that I’m still constrained a lot by this, and am still held down by the “language” in ways that I’m probably not aware of, but the best way someone can try to deliver something unique is to look really critically at their decision making process while they are working. Lots of composers have a “default” setting that they will return to when they have to make a decision about a rhythm, a structure, an orchestration etc., and a lot of the time these default settings aren’t down to conclusions that they actually arrived upon. These defaults have been subliminally picked up due to their ubiquitousness among other composers. When you are able to try and strip away these things, you can get to a point where the audience can actually see your musical ideas for what they are.

I think about the audience for my music a lot. My biggest aim is for people to enjoy my music, remember it, and want to hear it again. As such, there are certain considerations that need to be made when you are writing music to be performed by or listened to by a younger audience. When I wrote for the Young Sinfonia, I recognised that the best thing the piece I was writing could do would be to introduce the performers to the idea that contemporary music could be enjoyable and exciting, and something they could continue taking an interest in as their lives went on.

With the LSO, I wrote music for an under 5s show that was built around a children’s book, and was very aware that my music was only one part of the experience that we were creating. People that young are fundamentally different in many ways which leads to a few considerations; pieces can’t be too long, and if they are too quiet, the music can quickly be drowned out by anyone who wishes to vocally express themselves during the performance! But a lot of my thoughts were the same, or similar, to my usual thoughts while composing.

I am currently in the final stages for two pretty hefty pieces that have taken up most of my composing time this year. The first is my String Quartet which was commissioned by the Ligeti Quartet. It’s in four movements, one of which being Samoyeds which I wrote last year; the other three movements are very different and individual, focussing on distinct ideas.

The second piece is for the Britten Sinfonia, and is for two oboes, two horns, and twenty string players. Like Samoyeds, it’s based on a youtube video, and is my first time writing for quite a large ensemble in a while, and therefore very exciting!

I’m also just starting a new commission from St Andrews New Music Ensemble for small ensemble and backing track, which is based around a new design of the periodic table that highlights elements at risk of dispersion, and other issues. As my first piece with a proper backing track part, I’m really looking forward to getting stuck in and facing that challenge!

My usual advice is to focus on what makes you you. It’s hard and painful to live your life measuring yourself up to other people by their standards, when often there is incredible potential within people that can be unleashed if you are able to find the right angle to direct that potential. There are certainly a lot of things that I know I can’t do as well as other people, and that really got to me for quite a while. Being yourself and not holding yourself to the standards and expectations set by others is incredibly freeing and has been the most important realisation of my career.