Devices and Desires: A transatlantic collaboration - The Open College of the Arts
Skip to content

Devices and Desires: A transatlantic collaboration

Regular readers of my blog posts will know that collaboration is at the centre of my musical life, and one recent project seemed to provide an interesting (and perhaps unusual) case study.
Scott Miller is a composer and electronics performer based in St Cloud, Minneapolis. Like most of the composers I work with, I first made contact with him via the internet, and Scott made an adaptation of an earlier work, Lovely Little Monster for Kingma system (quarter tone) alto flute and electronics. 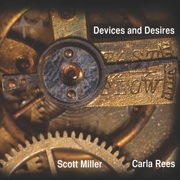 In February 2011, the opportunity arose for rarescale to visit Minneapolis, where over the course of just a few days, we gave the first performance of Lovely Little Monster, held some workshops and Scott and I met in person for the first time. We talked about the possibility of a new piece for my Kingma system alto flute with electronics, and decided to try out some of the electronics processes that were possible to see how they sounded. Scott had also written some pieces which involved some structured improvisation for a live instrument and electronics, and we spent a couple of hours in his studio trying out some of the ideas to see how they responded to the alto flute. He uses an electronics system called Kyma, and performs with a range of interfaces including an ipad and a laptop.
Improvising with electronics is fascinating, since the range of available sounds is practically infinite, so composers frequently create sets of sounds or processes to use in performance (almost as an artist’s palette).  When live processes are used on an instrumental sound, the response can vary according to the pitch range and dynamic of the instrument, so it was interesting to see what sort of sounds were possible using Scott’s system and how they responded to the flute.
In November 2011, Scott came to London for the premiere of the new alto flute piece, Anterior/Interior. Unfortunately, while the piece was being composed, my instruments were destroyed in a fire (and the Kingma system alto and bass flutes are still being rebuilt), so the project had to be adapted for the C flute. Despite this, however, we were determined to continue with the work we had started, and I booked a three hour recording session to allow us to record Anterior/ Interior and one of Scott’s structured improvisations, Haiku Interrupted. As a general rule of thumb, I would aim to record 20 minutes worth of music in a three hour recording session, to allow time for set up and different takes of each section. However, things went well, and we found that we had time to try out some more improvisations using Scott’s interactive electronics.
It was a fascinating process. Improvisation for me is all about listening and memory. By careful listening to the sounds that are generated from other players, new ideas develop, and can be combined with the earlier ideas through memory. Some sort of structure is vital, to help the listener follow the development of the piece, and it is important to create enough space in the texture that the ideas can be clearly defined. Like composition, I feel that the listener should not be overloaded by too many new ideas, so it is important to retain a sense of focus during an improvisation. As an improvisation cannot be reproduced exactly in a live situation, it was fantastic to have the opportunity to record the music we were creating for posterity.
We were surprised, after the event, to realize that we had generated enough material to make a CD. The material on Devices and Desires is an interesting fusion of my work and Scott’s, and the two elements cannot be separated; there’s no clear division of ideas between his and mine, and the fully composed work (Anterior/Interior) seems to fit into the soundworld of the improvisations very well, to the extent that perhaps it would be unclear to the listener which was which.

2 thoughts on “Devices and Desires: A transatlantic collaboration”