A Fine Art student completing Drawing Two: Investigating Drawing reflects on how the difficulties and opportunities of working large impacted on her practice.

Natasha Davy has just completed Drawing Two: Investigating Drawing. The work made for her Parallel Project grew larger and larger over time and provided some interesting problems. In this short interview her tutor Bryan Eccleshall asks her how she has dealt with those problems and, by engaging with them, where they might lead.

Your work is big. Can you track how that happened?

At first, I thought A3 was working pretty big, but then my tutor suggested that I scale up. I hadn’t considered this before, so I ventured into working on A2 and bizarrely I became much more aware of the paper borders. It felt unnatural and confined, so I scaled up some more wanting more space. Each time I tried a bigger paper size, it kept feeling that it wasn’t right. On reflection I realise it was my drawing energy and gestures that didn’t fit it, especially as I wanted to balance my work with the white of the paper to create some calm amongst the mark making.

Tell me about the materials you use: the paper and the charcoal. You make your own charcoal, I think.

I made my own charcoal blocks and cut my own bamboo for canes from my garden, initially to save money, but I found I made a stronger natural and raw connection when working with the homemade products. To save money, I also used basic DIY lining paper instead of expensive sheets or rolls. This made my work much more experimental, as I felt I could afford to make mistakes (and learn from them).

What does working on a large sheet offer you that smaller didn’t?

It’s very personal. The format and size of paper I chose suited my needs. I’m very interested in human form, so using a long roll of paper really suited the size and shape this subject matter. Working large gives me the freedom and choice of movement and space to place my energy. I have found that I can use my arms fully, work with sticks as extended arms, and so on, especially when working with emotional responses. Working small, for example at A3, is useful when on location though as I can make visual annotations and textures that I find interesting. 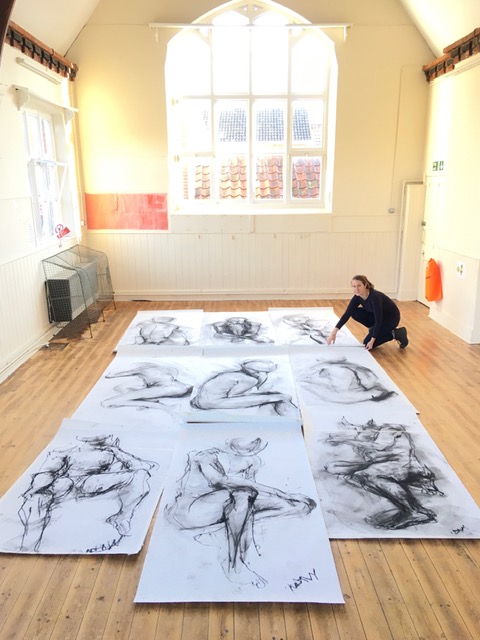 The Parallel Project has resolved into a series of large figure drawings. You’ve spent some time considering how these might be shown.

My human form work started getting to about the same size as myself, and each single piece seemed to rely on the other ones – like a family or gathering. I had about ten drawings in total, which ended up being a collection or body of work which I then had to display. I struggled at home for space, and the drawings ended up being rolled up and left in the corner of my room. I would put off looking at them as they were too big to open out.

My initial plan was to paper my studio walls then draw human form imagery directly onto them in a mural style. However, I realised that drawing vertically was an alien method to me. Inspired by the Norfolk landscape I grew up in, I usually draw with the paper flat on the floor, so when working upright failed, I had to unroll the previous life study work for inspiration and rethink everything. I researched other large-scale artists such as Anselm Kiefer and Julie Mehretu but I didn’t have their levels of space or money. In the end I looked at other inexpensive methods and decided to hang the pieces from wire, almost like outfits or washing on a line. For me, this method actually added to the context of my work and has encouraged me to think more sculpturally about presenting pieces in the future.

Can you explain some of the obstacles you’ve overcome in making and displaying this work?

Big work demands bigger tools, bigger energy, bigger expense, bigger risk taking and bigger space. I found the work both making, logistics and presenting, physically and emotionally demanding. I have found out that I have a lot of stamina and energy! Initially when hanging the work for my final Parallel Project submission – paper becomes heavy, especially at such large sizes – it wasn’t supported enough and it flopped with gravity, so I used my bamboo canes to support the end widths when hanging, but this offered a positive relationship in using the working tools to present the pieces too, with the work coming full circle.

Finishing a unit can be a strange moment of resolution tinged with regret that ‘if only I’d known then what I know now’. Almost as if you could now do it all again, but properly. So, what’s next? Does this feel like the beginning or the end of something?

This project felt like a win because I’d managed to resolve so many unexpected issues. I don’t feel that it has ended though. I still want to draw more pieces like this, however now I will have the benefit of thinking about how to finish before I start. Next projects? I’m interested in how artists make large scale work on location. I’m thinking of challenging the large-scale format, and taking it into the landscape, so I can work directly, nature to nature. Norfolk is flat, so I think it can be my floor to work on – so long as it’s a nice day! How will I display this? Well, yes – that’s already been planned too, and it won’t be flat against a wall!