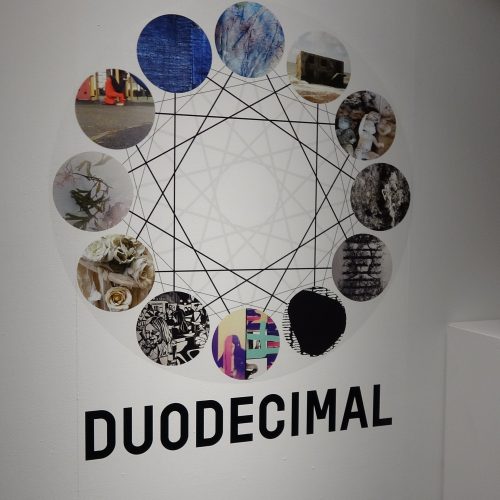 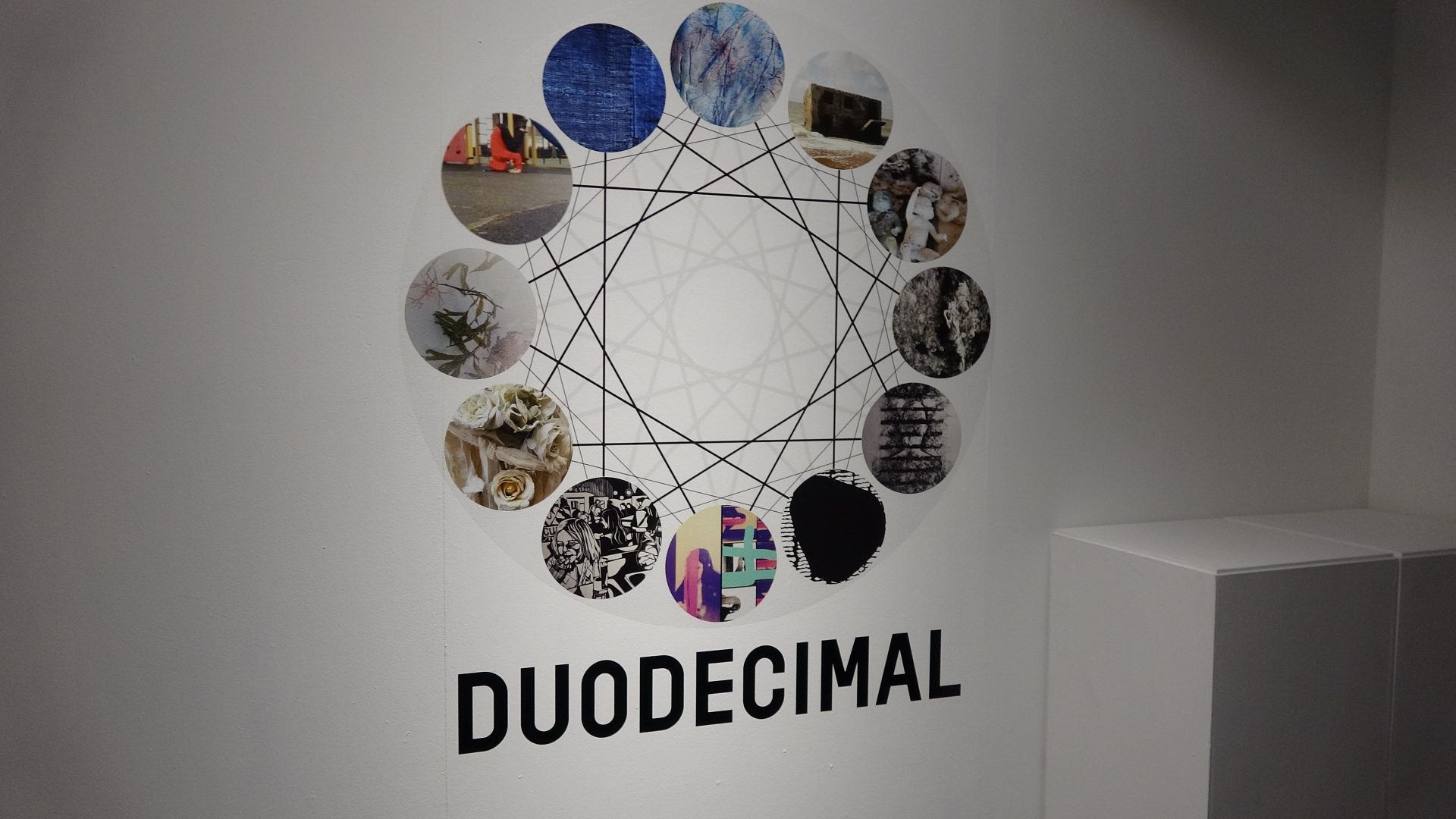 The MA Fine Art course offered by the OCA is a cohort-oriented postgraduate course that results in a group exhibition of work. This year twelve students from the UK, Northern Ireland, Cyprus, Sweden, Austria, Italy and the USA all showed their work at The Civic in Barnsley under the title ‘Duodecimal’.

Degree shows can be hard to take in as the work is usually concerned with a wide variety of themes, made more complex by different approaches to making using different media and – sometimes – varying quality. I want to think about how the works echoed and rhymed and contradict one another across the space to build to a convincing, vibrant, whole.

It should be borne in mind that the Duodecimal cohort, prior to installing this show,  had only met each other online. Much can be worked out in advance, but there’s always likely to be something that surprises once the work arrives. It is to their credit that the show – as a whole – looked so good. 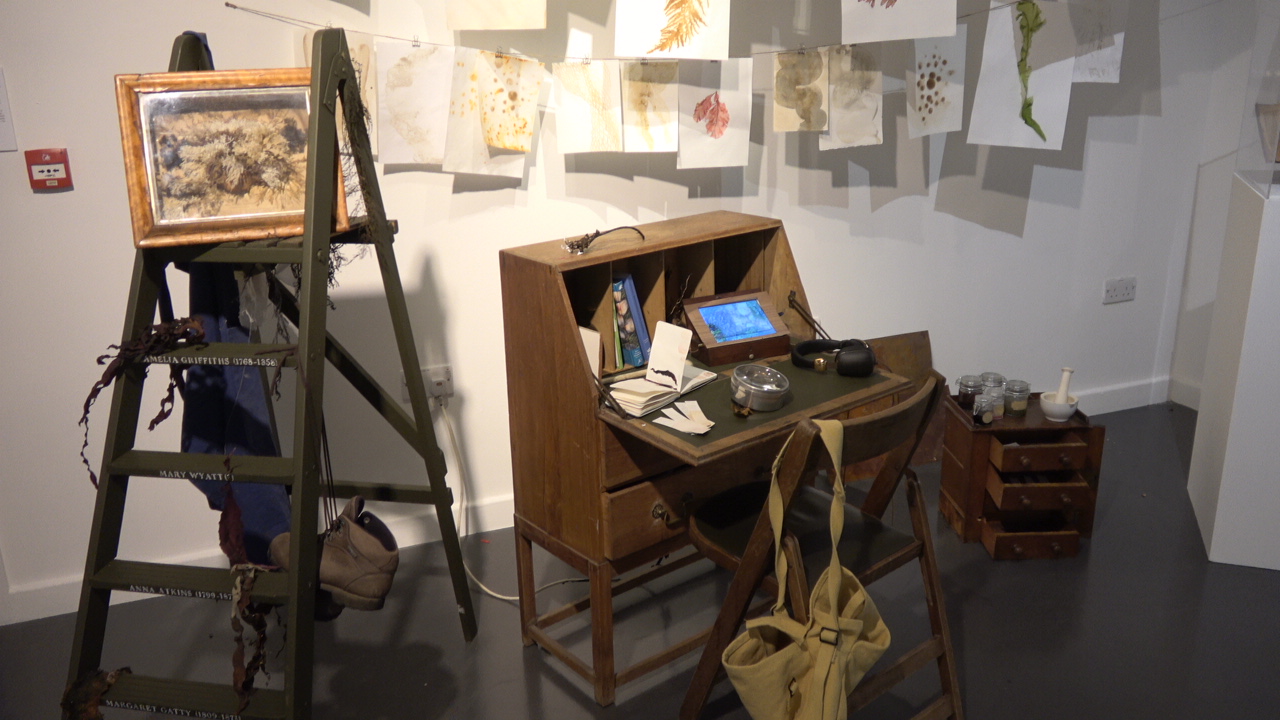 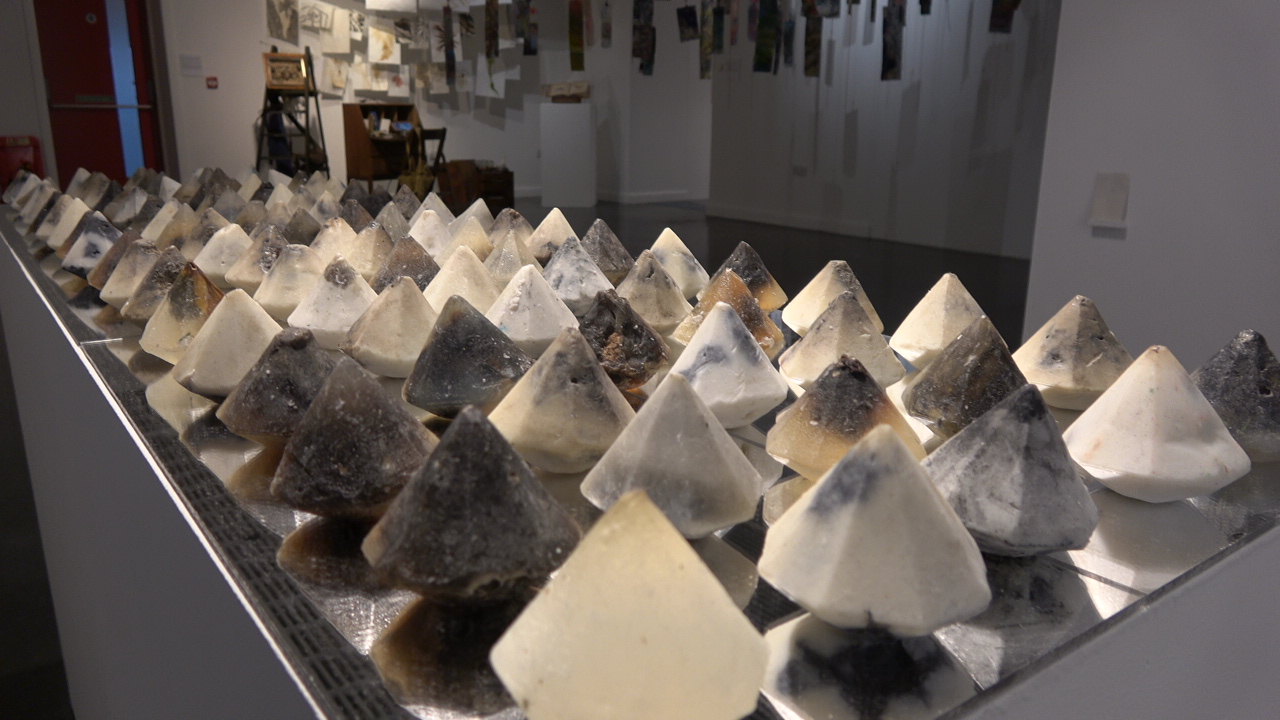 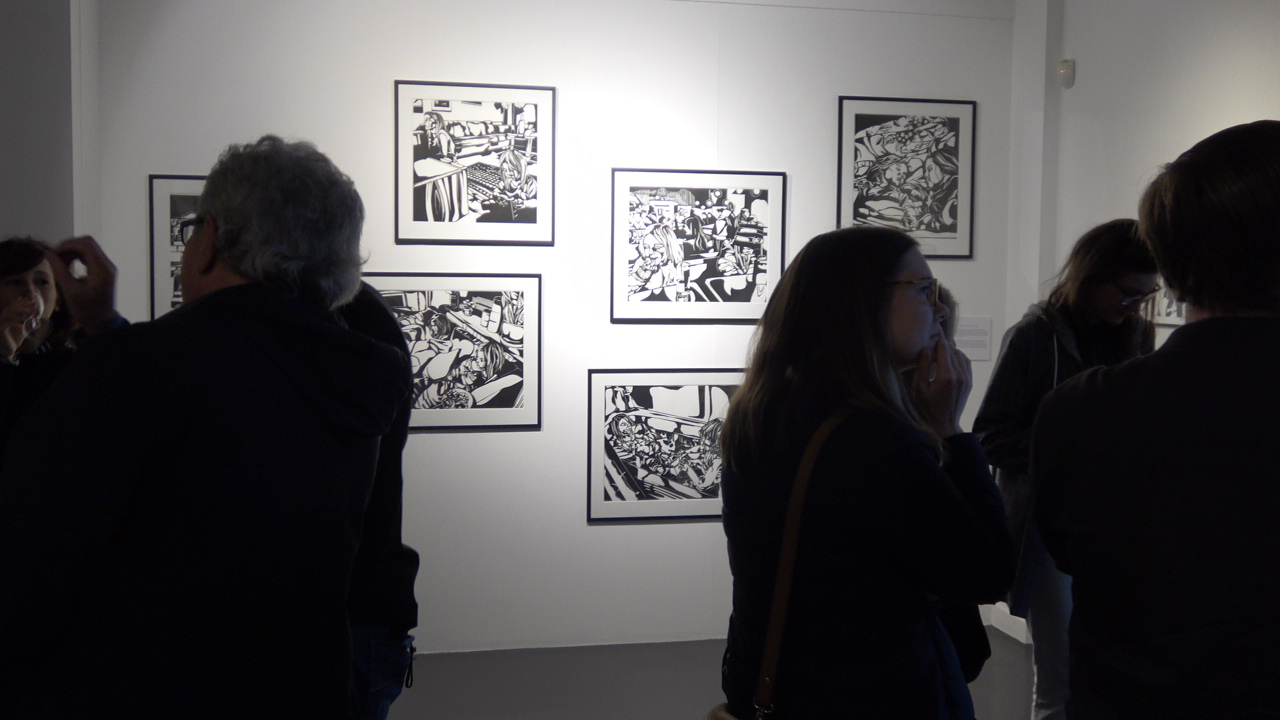 Looking back through photographs of the exhibition, it’s clear that similarity and difference played a huge part in the overall effect. There are conventional pictures:  Marten Tollin’s monochrome prints document contemporary banality – a trip to a coffee shop, lounging on a sofa – but do so in such a beautiful, closely observed way that it’s hard not to feel sympathy for the bored protagonists. Duncan Mosley’s colourful works: a repeated photograph that is disrupted and obscured by a digitally added gesture in acid, artificial colours. We are wrong-footed by their appearance. They are, I would suggest ‘almost-paintings’. Colourfully more joyful than Tollin’s work, but no less bleak in their way.

Other pictures in the show tend to be hung in space as components of installations. Kirsty Lamont’s large hanging pieces seduce through their scale. To be close to them is to be overwhelmed while Claudia Dharamshi’s delicate seaweed paintings are hung as if drying on a line, giving them the feeling of a collection where no particular image holds all the answers. We are instead invited to enjoy all of it at once and then to investigate the nooks and crannies. Jacqueline M. Byrne’s work also employed hanging drawings – or rather fragments of drawings and paintings – placed to disrupt a projected film, casting shadows that become metaphors for memory loss.

While looking at Byrne’s installation I became aware of something that seemed at once familiar and strange: the smell of fabric conditioner. Placid bowls of different conditioners formed part of Marios Theophilides work. Over time these bowls of liquid dried out, like mud on an estuary. Of all the work in Duodecimal, this was the most uncanny collection. Casts of babies made in soap – and then washed away in a disturbing video – and diamonds of soap that contained hair and dust. Clean and unclean. I’m still thinking about this piece.

Textiles played an important role in the show, too. Mary Myers, Barbara Bryn Klare, and Elena Redaelli all use cloth and/or allusions to clothing to explore our relationship with the world and the natural processes that act on us. Myers delicate and detailed clothes hang picture like on a backdrop. In an accompanying text she writes about rituals and these garments seem to be waiting to be worn. Redaelli’s work is more straightforwardly sculptural, emulating the surface of stone in wool and other textiles. This undermines hardness with delicacy, emphasising how vulnerable the world is when humans get busy. Klare’s work combines text and textile into poetic robes that memorialise and celebrate the words of her recently deceased mother. As an aside it is perhaps important to note that loss, mourning, memory and other themes associated with maturation and ageing are often a feature of OCA student work. The work produced is often melancholy and thoughtful and less concerned with sure certainties of youth.

Alan Rutherford ambitious work gathered first hand research material abroad – looking at conditions of loss and disappearance, where the past built environments become ‘sites of memory’ and explored ideological power relations between the past and the present. He then combined this material with re-created places and scenes in film. This was all shown on screens embedded in an ‘island’ – a floor-based installation populated with new media that invited viewers to walk around it as though navigating the edges and boundaries of community it represented. This is complex work exploited what contemporary art can offer the storyteller: flashes of narrative in complex rhizomatic whole that is what Umberto Eco would call an ‘open’ work.

Jon Whitbread – a stone carver – showed his work in display cases, on plinths and on the floor. In some ways these appeared to be formal and minimalist, but his accompanying text reveals an interest in materiality and surface and the nature of art-making’s ability to reveal knowledge about itself. The sculptures becoming documents or way-stations in an ongoing, restless enquiry.

Rachel MacManus’ work was perhaps the hardest to integrate in to the show, but having something ‘other’ within a space give a kind of counterbalance to what is perhaps a forced unity. I, too, am prey to that. Writing about art is often done in a search for coherence, so it’s good to be reminded of difficulty and barriers. MacManus’ film Pushing Through is documentation of a visceral act – the artist clawing at a latex barrier. The camera (that is, we) is witness to the struggle, but only second-hand. We see the five-pointed hands and the head push and grab and butt the latex to no avail. It looks exhausting. It’s tempting to read the piece as a metaphor for the failure of artistic expression to communicate. It’s a blind, disembodied (ironically) scream that is pointed towards us, but which will never be comprehended. MacManus’ second piece is – at first glance – more straightforwardly communicative, but it too is disrupted and disruptive. Communication is a tricky thing. 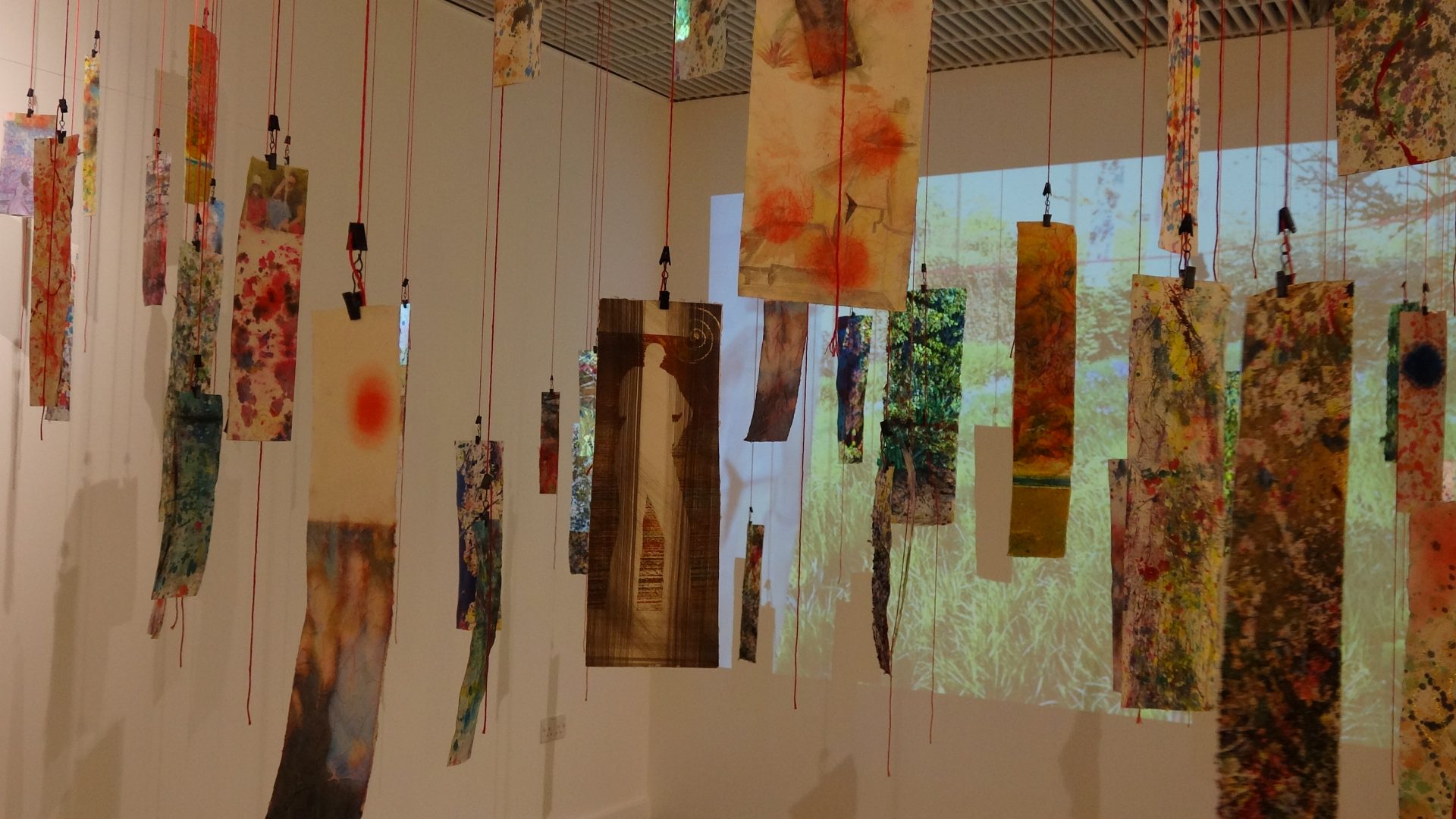 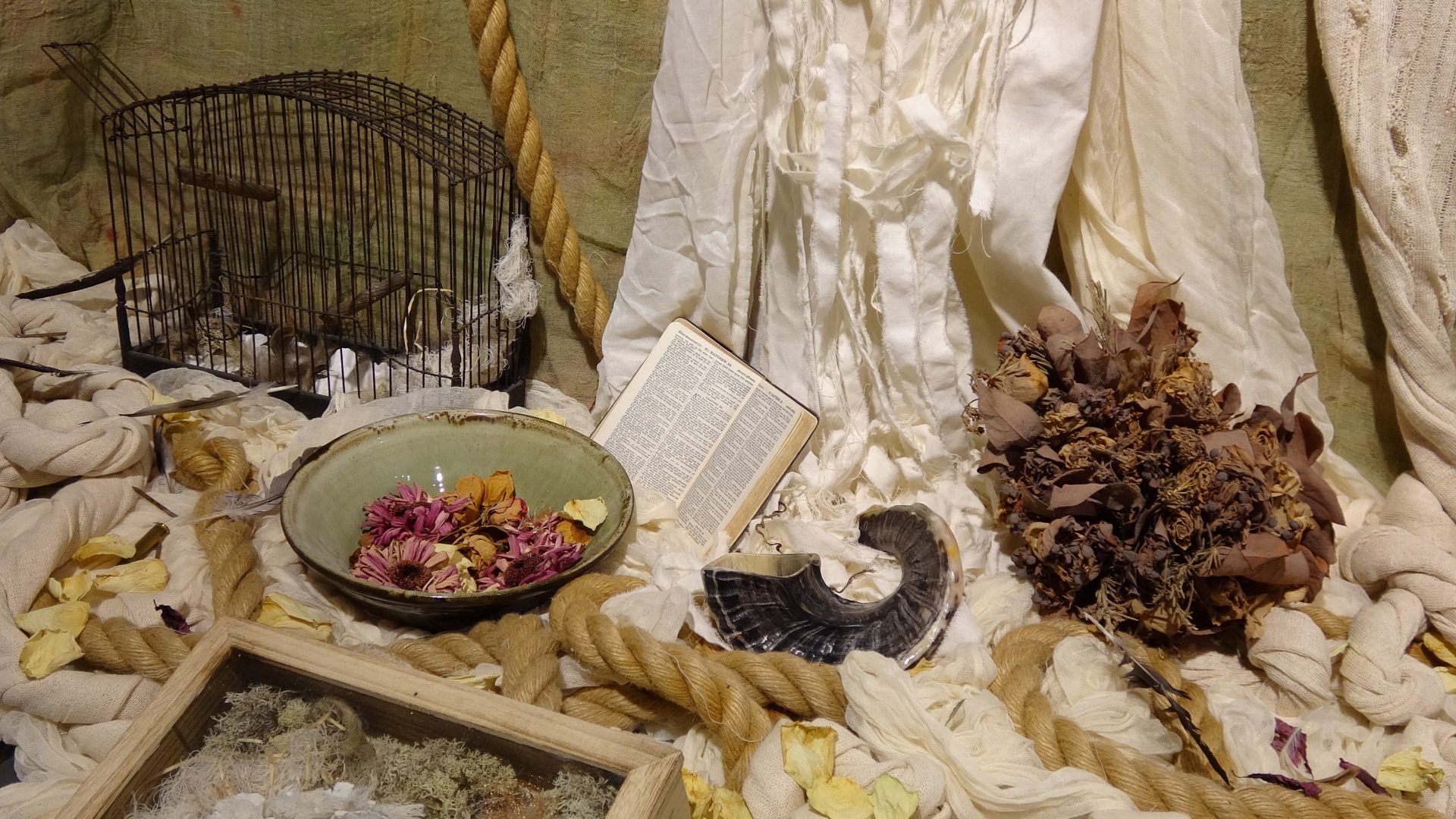 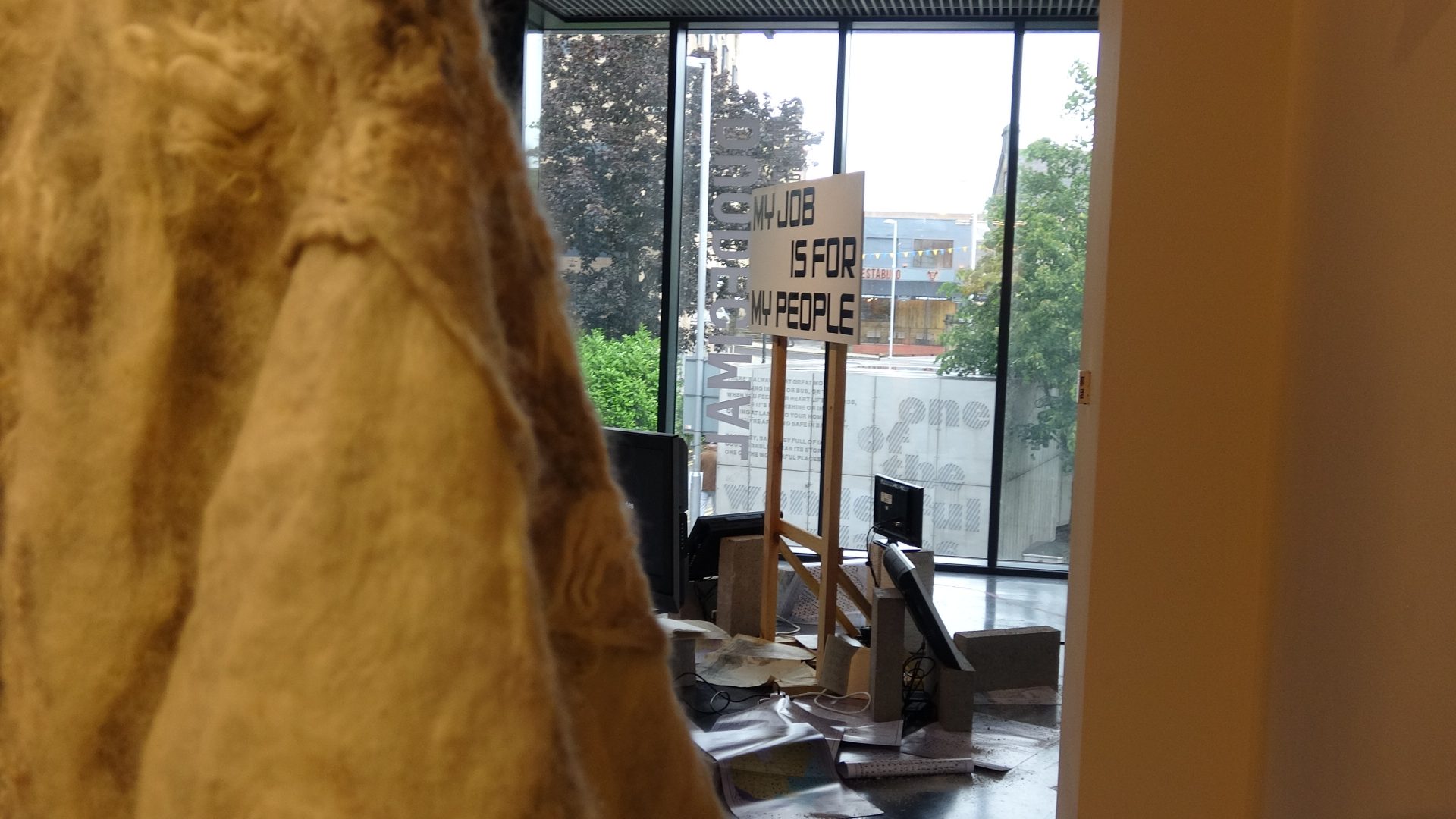 Art works placed near each other imply further meaning through juxtaposition and while that might not be a consideration in the studio, it is an important part of curation.

The overriding impression of the show was that the work is conceptually and formally ambitious and that everyone worked hard to produce things that are well-made and convincing. Everything – the material, the way that media is handled, the way stuff is presented – has been thought about and worried over. Nothing is slack or scruffy. Much of the work shown in Duodecimal could be taken pretty much unaltered into commercial galleries or museums. This high level of finish might seem less important or unconnected to any ‘meaning’ the artists’ intended for the work, but I think it’s an important consideration, especially in a show full of so many voices.

One thought on “Reflecting on Duodecimal”

Moira Ratmoko recently completed Sculpture 1: Starting out in 3D, on the BA (Hons)...