It’s not just black and white

The Whitworth Gallery in Manchester has recently been refurbished and this visit — to see the Deanna Petherbridge show — was my first since the changes. They’re quite subtle, though the café now looks out onto the neighbouring park and is much bigger. It was there that I met the eight students who’d come to see the show.
Over lunch and coffee we discussed their experiences of their courses and, inevitably, their tutors. There was also quite a bit of chat about how Drawing Two differs greatly from Drawing One, with students giving advice to one another about how to tackle those differences. For anyone who hasn’t taken the plunge and attended a study visit, it’s in this sort of conversation — as much as in the discussions about art — that their value is often found.
But what of the art? I’m not sure I’ve ever seen Petherbridge’s work in the flesh before, and certainly not a solo show of images that spoke to one another across her long career. There’s a patient, meditative quality about the meticulous ink drawings she makes which might seem incongruous when the images are of war-damaged buildings, but instead it adds pathos and tension to the work. What takes moments to destroy is carefully remade in image form. Much of the work on display is an exploration of the built space. It isn’t really of specific architecture, but it is architectonic. There’s often a slippage between different vantage points in the works and much of our discussion was around Petherbridge’s representations of space. It’s complex and often contradictory. Parts of a work might conform, more or less, to linear perspective, but elsewhere she represents space in ways more familiar to architectural plans or that found in Middle and Far Eastern art. This generates unease, forcing the viewer to take time to work out what’s going on. As Stephen writes on his blog:
Technically the work is exceptional. Working in Isometric/Axonometric, perspective is thrown all over which pulls you over the drawing in a head spin, pictures within pictures. Mind blowing.

Catherine’s comment gets to the nub of the effect that this jiggery-pokery can have on the viewer.
The way she mixes them [different kinds of perspective] is disorientating, and made me feel wobbly headed at times. My brain could not work it out. (https://cleveydraw2.wordpress.com/category/coursework/part-4/oca-study-visit-petherbridge-at-whitworth/)
An OCA blogpost by recently retired tutor Jim Unsworth was mentioned a few times on the day as it covers how perspective can be manipulated for effect. Find it here.
Stephen’s blog, incidentally, is a great resource in relation to Petherbridge as he’s carefully listed and explained all the artists he’s reminded of when standing in front of these works. Some of these artists are new to me, but what’s clear from reading the blog is that Stephen (just completing Level One) is connecting the work of different artists, but from his perspective, and not just within a conventional art historical narrative.
Complimenting the Petherbidge show, the Whitworth was also showing a collection of prints by Marcantonio Raimondi, who collaborated with Raphael. Mick, like Stephen, has plotted connections between artists, writing that:
The whole afternoon was curiously summed up by Deanna Petherbridge in The Primacy of Drawing where she notes ‘Raphael and Dürer famously interchanged drawings about 1515 […] The Raphael / Dürer reciprocity is an acknowledgement of admiration and equal status,’ when Durer was probably made aware of Raphael’s work through the etchings of Marcantonio. (Petherbridge 2010: 76).(https://mickosthehat2.wordpress.com/category/drawing-2/gallery-visits/study-visit-1/)

From my perspective — no pun intended — it’s the connections between works and between artists and between students that made this visit so rewarding. Linking things together is an important, but difficult, part of degree level study. It’s tempting to simply read art history and to regurgitate received wisdom, but by honestly engaging with Petherbridge’s complex and demanding (but very seductive) works with others in the Whitworth and beyond it’s possible to build a personal relationship with art and to mediate it through one’s own experiences.
Since the visit the students have swapped blog addresses and left comments for each other which, I hope will strengthen their sense of belonging to a tangible institution as well as introducing critical voices to which they can turn throughout their studies.
Image Credit:
Image 1: OCA tutor Bryan Eccleshall
Image 2: OCA student Jennifer Wallace

7 thoughts on “It’s not just black and white” 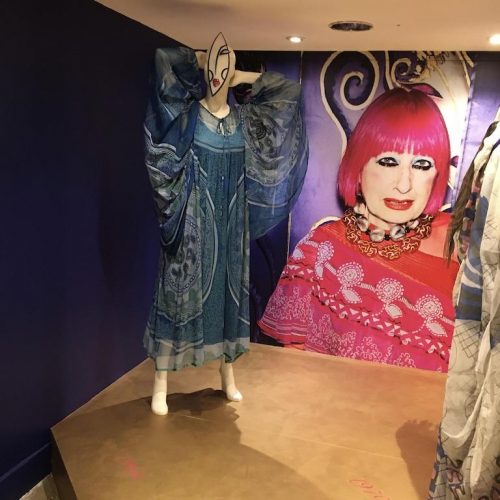 Joanna Whittle is a painter based in Sheffield. Joanna studied at Central St Martin’s...