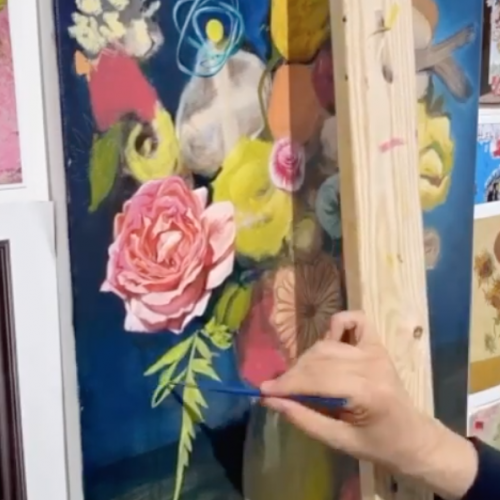 In recent weeks Turner Prize winning artist Keith Tyson (born 1969) has been putting a lot of energy into his ‘Isolation Art School’ on Instagram. This initiative has encouraged practitioners to offer tips and tutorials about making and to then post them on Instagram with the hashtag #isolationartschool.

Tyson’s team picks through the posts and reposts some on Isolation Art School’s own instagram account (https://www.instagram.com/isolationartschool). As I write this blogpost the account has reposted 200 short films and the hashtag has been used thousands of times. The 200 or so posts include a short series by Tyson himself which he calls ‘Painting for Absolute Beginners’. There are links to these posts at the foot of this blogpost.

Seeing this initiative grow piqued my curiosity. Tyson comes across in his short videos as affable and wise and I wanted to know more about him. I was aware of him but not particularly familiar with his work. I found an interview he gave to Veronica Simpson about year ago, now published on the Studio International website which I think offers some insight into his thinking and that I think would be useful to OCA students. You can find the interview here: https://www.studiointernational.com/index.php/keith-tyson-interview-life-still-hauser-wirth

The key points that are worth taking from the interview for me are:

I started doing them when I started doing scrape paintings. I’d find an old painting in a junk shop and then I’d repair it and then scrape over it, like (Gerhard) Richter draws over his pictures with a squeegee. Then, where the ground is, I’d paint into that ground, and get some interference going in the surface. I’d started painting flowers into them because they didn’t have any other signification other than that they’re flowers. I mean, obviously they’re symbolic and they’ve got all this weight behind them, but generally they’re like, get a brush, get in there and get some sort of juice, and it sort of evolved from there.

it’s just me working with the physicality, with the paint itself, what emerges, and what reminds me of a flower. It’s literally putting paint on, re-scraping it, putting stuff on like an abstract painting. And these flowers have emerged literally from that process. Even the ones that look quite realistic, it’s just because a splat of paint reminded me of a lily or a rose or something. And then I’ve gone and found a picture of a lily and converted it. It’s like you’ve read this bouquet out of a process that’s a bit like reading tea leaves. It’s a completely emergent thing.


That sense of ‘working through’ is important. As artists we are the first audience for the work we make and we should be using the making process as a voyage of enquiry and discovery, rather than simply displaying a skill. The irony is, of course, that if one is fascinated by one’s own practice – in the way that Tyson is obviously fascinated by many aspects of his – then the quality of the work will improve because we are engaged in a purposeful task.

Congratulations to OCA student Stefan Schaffeld who was recently shortlisted for the Ashurst Emerging...

Online Exhibiting 1: ‘A practice of possibility’: exhibiting art in a mid-pandemic world

As the first in a series of Sustaining Your Practice-related blog posts on online...

I have settled reasonably well into life in lockdown and I think it’s largely...