When is a collection of short stories a novel? - The Open College of the Arts
Skip to content 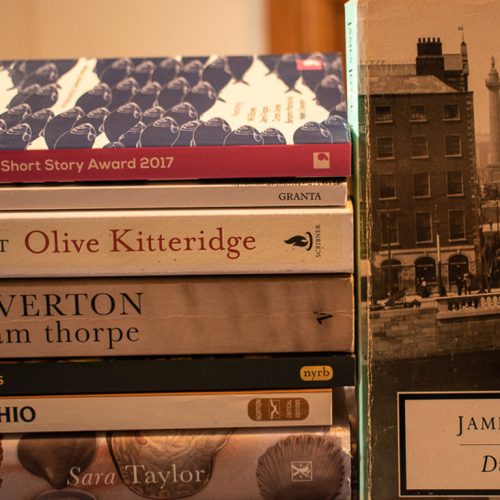 When is a collection of short stories a novel?

It might seem obvious whether a book is a novel or a collection of short stories, yet I keep coming across books that seem to straddle both categories. So how can a book be both?
Plenty of short story collections are described as ‘linked stories’. The link might be location, character or theme. Classic short story collections linked by location include Robert Walser’s Berlin Stories (1905), James Joyce’s Dubliners (1914), and Sherwood Anderson’s Winesburg, Ohio (1919). More recently, Wendy Erskine has set the stories in her debut collection, Sweet Home (2018,) in contemporary East Belfast, and D. Wystan Owen has set all the stories in his collection, Other People’s Love Affairs (2018), in the fictional seaside town of Glass.
But Adam Thorpe’s novel Ulverton (1992) also consists of a series of disparate stories, set in the English village of Ulverton. Sara Taylor’s book The Shore (2015), also marketed as a novel, lists on its contents page ‘chapters’, not stories, although reviewers have described it as both a ‘novel’ and ‘a collection of interlinked stories’.
What distinguishes novels such as Ulverton and The Shore from short story collections such as Dubliners? I don’t have a ready answer for this, but suspect it’s something to do with nebulous concepts such as the shape and feel of the stories, and how they work together to create a sense of the whole. The chapters in Ulverton, for example, don’t feel as satisfyingly shaped as one might expect from stand-alone short stories – they are often vignettes or brief episodes, and need to be slotted into the novel’s framework to give greater satisfaction. By contrast, a story like ‘The Dead’ from Joyce’s Dubliners is arguably one of the finest short stories ever written and doesn’t need to be read in the context of the other stories to feel like a complete work of art.
Location isn’t the only thing that can hold a book of short stories together. Elizabeth Strout’s novel Olive Kitteridge (2008) consists of what feel like complete short stories which revolve around the intimidating figure of Olive, a retired school teacher. Each story focuses on a different person who knows Olive, whether closely – there’s a chapter from her husband’s point of view – or more distantly, such as a former school pupil. This gives a wonderfully kaleidoscopic view of Olive, and gets close to the truth of how we are all seen differently by the people we meet in our lives. This book has the best of both worlds – the stories feel complete and satisfying in themselves, yet taken together you gain a much deeper understanding of Strout’s title character.
I wonder if writing a collection of linked short stories that can be marketed as a novel is a stroke of genius. You can submit your ‘stories’ to competitions and magazines, but you can also publish (if you’re lucky) the complete ‘novel’ and be eligible for novel prizes too. Plenty of short story winners turn out to have submitted parts of a novel. Will Eaves’ story, ‘Murmur’ was shortlisted for the BBC National short story award in 2017, beaten to top prize by Cynan Jones’ story, ‘The Edge of the Shoal.’ ‘Murmur’ was subsequently published as a novel, Murmur, in 2018, and recently won the Wellcome Book Prize. ‘The Edge of the Shoal’ was a significant section of Jones’s (very short) novel, Cove (2016). Is this cheating? If the pieces work as both stories and sections of novels, then surely it’s okay?
More practically, calling your linked short stories a ‘novel’ will probably lead to more readers. So many people, even avid readers, just don’t read short stories. In the publishing world, debut writers with short story collections are far rarer (even now, with more interest in the form) than debut novelists, because publishers know novels sell more copies than short story collections. So it makes sense for short story writers to be a bit sneaky!
As someone who reads both novels and short stories, I’m really not bothered what they’re called. But those books with chapters that pack the punch of short stories, yet allow the development of character and theme over the duration of something novel-length, seem to offer something fascinating, and, like Olive Kitteridge, the whole can be greater than its parts. Incidentally, I once read that there’s a word in German for ‘novels made of short stories’, but despite scouring the internet I’ve never come across it again. If anyone knows it, do let me know.
I’d love to hear from the #weareoca community about your views on this – can a book be both a novel and a short story collection? And what books have you enjoyed (or not!) that straddle both categories?

4 thoughts on “When is a collection of short stories a novel?”