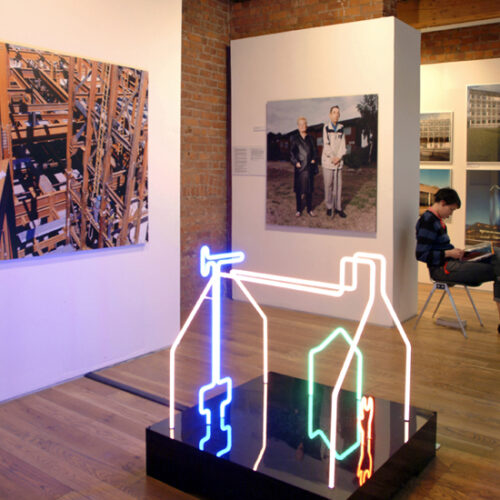 We all use – and therefore copy – artworks to illustrate our own research, but as we have seen taking and using these images is complicated. In this post I am using the primary source of artworks – galleries – as a case study to examine the post-digital shift in how copyright is thought of and applied.

If you see a picture or sculpture in a gallery you may want to copy it via photography, drawing or painting, but who owns the copyright? The answer is not straightforward as the artwork could be on loan from the artist, a collector or another gallery, any of whom may own the copyright. The gallery may have bought the work, but the copyright (literally the right to copy) could remain with the artist. Even if the artwork is out of copyright you have to abide by the gallery’s rules, because you are on private property.

It is not that galleries are authoritarian and autocratic – that they just love to say no – as often their hands are tied by the copyright owners, to protect commercial interests. That is why photography (and sometimes drawing) may not be allowed in rooms containing touring exhibitions, whereas it may be in rooms containing works from the galleries own collection may allow it. As Danny Birchall stated, ‘I actively solicit photographs taken in or around my museum [but]…overwhelmingly, restrictions are external to the institution itself’ (Birchall 2011).

Here are two examples of the inconsistent nature of the application of copyright: Thomas Struth’s exhibition ‘Museum Photographs’ that consists of candid photographs of people in taken art galleries. When on show at the Prado gallery, Madrid photography of the exhibition was banned: the irony of which was obviously lost on the staff (Doctorow 2007a). Until relatively recently the (English) National Trust banned photography, for the fabricated reason of safeguarding exhibits from damage by flash photography. The National Trust for Scotland (facing identical issues) did not ban photography.

More recently attitudes to copyright in the post-digital era have changed considerably: many museums and galleries now encourage photography – in order to be shared. It has been recognised that the traditional forms of dissemination from galleries to consumers has been superseded by a ‘mosaic of technologies”, providing a continually evolving and interacting present (Rubinstein and Sluis 2008). This acknowledges that the way people relate to information in general, and the gallery/museum context in particular, has altered irrevocably.

Using the social media of current visitors to raise the gallery’s profile attracts further visitors (either physically or online), outweighing the disadvantages. The visitors’ experience becomes more interactive, giving visitors the feeling of joint ownership of the artefacts and of their cultural value. Dissemination with democratisation encourages discourse, increases participation and engagement with cultural offerings. Debra Leighton has summarised empirical evidence to suggest the positive aspects of this sharing of information, benefitting the museum’s publicity (Leighton 2007). She suggests that more importantly than asking ‘will it benefit us?’ are questions such as ‘can we stop it’, or ‘is it worth the effort’ and increasingly ‘do we have the resources available anyway’.

Images of artworks are traditionally a capitalised medium; they earn money that must be accounted for. The National Trust’s gift shop and image library were being safeguarded in the past, so how has the system changed? There are now extra layers protecting ‘commercial’ images. Many ‘public’ galleries are funded by whatever means they can manage, including image rights and reproductions in their shops. However, income based on copyrighting photographs of the originals has been eroded by several court cases (Butler 1998), comprising some big players. Consequently the originality of an artwork – what Walter Benjamin called its ‘aura’ (Benjamin 2004) – retakes centre stage over the facsimile as the version with currency. In losing their case against Corel Corp. Bridgeman Art Library set a legal precedent that a photograph of an artwork is not a new work eligible for copyright (in the U.S.), so Bridgeman had inadvertently destroyed a major market for its products (Elcher 2007). In the U.K. this precedent was checked after The National Portrait Gallery ‘bitch-slapped’ Wikipedia over a similar rights issue (Orlowski 2009).

Although the creation and distribution of images is now democratised, it is legally far more complex. A more pragmatic, common-sense approach to using other people’s images and words has evolved amongst many institutions, for example the notion of ‘fair use’ provides an amount of ‘artistic license’ within the parameters of copyright http://www.dmlp.org/legal-guide/fair-use. Such exceptions as educational contexts are largely based on the concept that non-commercial use does not harm the copyright holder’s interests. There is also the case of the reporting of factual content in the public domain, by showing context (not a direct copy of a single artwork). Street photography is a good example that shows what can already be seen and is therefore neither private nor privileged.

OCA students have access to resources copyright-free sources, but they should still be fully attributed (just as you would with any other external source): Bridgeman library, and creative commons that can be searched via Flickr or Wikimedia. Also note that there are exceptions to copyright for people with certain disabilities (see the Gov.Uk website).

In the final post on copyright I will be looking at appropriation for reworking into your own art …or is it your own? I’ll draw from examples including collage, pastiche, homage, reworking, spoof, parody …and any other name that excuses blatantly stealing from another’s work.

For an example of a reasonable policy regarding photography in galleries (that could be extended to copying by other means). https://www.spurlock.illinois.edu/about/policies/visitor-photography.html

For information on the different types of use allowed by Creative Commons attributions see https://creativecommons.org/licenses/

For more on the history of how copyright and art have produced the ‘contested image’ see the recently published Art and Modern Copyright: The Contested Image by Dr Elena Cooper [http://britishphotohistory.ning.com/profiles/blogs/publication-art-and-modern-copyright-the-contested-image]

See Allan Kohl’s perspective on the use of copyrighted images in the context of the teaching visual subjects in higher education (Kohl 1997).

For a well-structured approach to the use of images generated by galleries see Amalyah Keshet’s article ‘Fair Use, Fair Trade, and Museum Image Licensing’ (Keshet 1997)

Benjamin, W. (2004). The work of art in the age of its Technological Reproducibility [Originally published: Zeitschrift für Sozialforschung, 1935.], http://www.Jahsonic.com/WAAMR.html.

Elcher, C. (2007). “How to copyright Michelangelo: From the Borgias to Bill Gates.” The Register. from http://www.theregister.co.uk/2007/12/27/how_to_copyright_michelangelo/page2.html.

Leighton, D. (2007). “In the frame: Investigating the use of mobile phone photography in museums.” International Journal of Nonproﬁt and Voluntary Sector Marketing 12: 308-319.

> Next Post Work the way you want – why is a lifestyle business right for you?