Have Fun with it: Word games to shake up your process and get you out of writers’ block - The Open College of the Arts
Skip to content 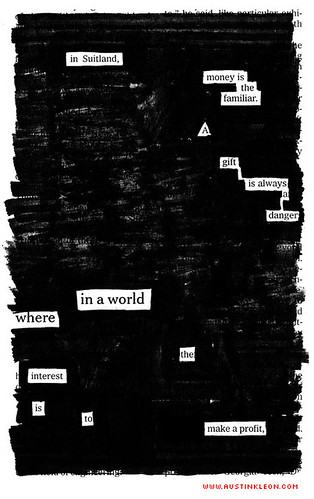 Have Fun with it: Word games to shake up your process and get you out of writers’ block

So you’ve been trying to come up with some new ideas, or turning over that same piece of work for weeks now, and it just doesn’t feel like inspiration is coming your way. We’ve all felt like this, I think, and we can agree that ideas can come from the least likely places – something you overhear, something found in a pocket, a billboard on your drive to work – but what if you’re just not finding them? This post introduces a few ideas that are excellent ways of playing with words, freeing up your process and creating the circumstances in which new ideas might present themselves.

I sometimes use this idea in workshops as a method for ‘writing a poem by chance’. You need at least six lines of poetry, and you need to generate them somehow. Looking at an image might be a good way of doing this – on a postcard or online, for example, choosing a picture you haven’t looked at before. I’ve also used playing cards or tarot cards in workshops to further connect with this theme of chance. Once you’ve free written for a while inspired by your image or card, you need to pick the six lines you like best, and number them 1-6.

We now come to the dice. In order to create your poem, roll the dice six times and for each roll, write down the corresponding line. You may find there’s a repeated line (or more than one) but nevertheless write them down faithfully. See what you end up with. Does it read like a poem? Is there a line you like in it, or an image? Sometimes that’s all you need to start you off in a new direction.

Popular with the likes of the Dadaist movement and William Burroughs, cut ups involve cutting up existing texts and repositioning them around each other. The technique involves taking two different texts, tearing them down the centre, and positioning two half-pages as if they are one page, then reading through or writing them out as one, and seeing if there are lines, ideas, or images that interest you as a starting point. The Dadaists tended to use fewer words on the page, and so the outcome would often be a cut-and-paste poem of sorts. You could make it four quarters or sixths instead of two halves to incorporate more texts, but you’re bound to come up with a starting point or a starting line somewhere.

This method is suggested by the photo illustration – you can take any text and a pen and black out letters to form a poem, just as Austin Kleon has in the image above. There are plenty of great examples of erasure or ‘blackout’ poetry in the world – the American poet Mary Ruefle has published books of it and describes it as a joyful creative experience, something she sits down to do every day if she can.

Be warned though – erasure definitely isn’t as easy as it looks. Often I am completely paralysed by the choice of words that are in front of me, and it can take me a long time to choose them and work out how the poem is going to go. It’s such an absorbing activity that it’s a really good choice for taking your mind elsewhere and letting creative thoughts spring out. The visual / digital possibilities are pretty intriguing too – check out this book of erasure poems that use Twitter as their starting point.

N+7 is a writing technique that first came about as part of the Oulipo movement, who used rules and writing constraints as a major part of their writing practice (one of them, Georges Perec, wrote an entire novel without using the letter ‘e’, if you really want a challenge). N+7 is the process of taking all the nouns in an existing piece of work and counting a forward by a certain number nouns (traditionally 7, but you can choose) in the dictionary and replacing them. Here’s an example, using the first three lines of a poem by me, titled ‘How We Miss Them’.

We loved to watch them from above
in their high-speed lives
their small, soft-covered heads

We loved to water them from above
in their high-spending lives
their small, soil-covered headlands

The poem is about trees looking at humans, so the ‘water them from above’ has really turned the perspective somehow. And the indictment of capitalism in ‘high spending lives’ is something I might want to include in the poem now.

The good news is that if this sounds like a dictionary-bound faff, there’s a website that can do the whole thing for you if you cut and paste the piece you’re messing with: http://www.spoonbill.org/n+7/

So here we have it – a few methods you might benefit from if you’re a bit stuck, or tired of the sound of your own voice, or looking for a new writing experiment. I hope you get try some of these techniques, even if it’s just for the fun of it.