Australian literature - The Open College of the Arts
Skip to content 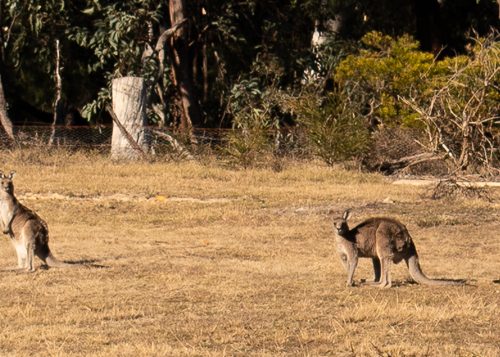 This year I was fortunate enough to spend a month at Varuna, the National Writers’ House, in the Blue Mountains of Australia. Varuna was formerly the house of Eleanor Dark, one of Australia’s foremost authors, and after her death in 1990 her son Mick Dark generously arranged for it to become a retreat for writers.

I’m guessing that many of you won’t have heard of Eleanor Dark and until I stayed at Varuna I hadn’t either. During my month in Australia I was determined to immerse myself in Australian literature and to start building up a picture of the “Aussie lit scene”. Many Australian writers have gained readers and critical acclaim overseas – Helen Garner, Kate Grenville and David Malouf immediately spring to mind. There is also a new generation of Australian writers who are starting to achieve international recognition, including Hannah Kent, Evie Wyld, Charlotte Wood and Fiona McFarlane (winner of the Dylan Thomas Prize for her collection of short stories, The High Places). However Australia has many writers who are much less well known abroad, but who deserve to be read and appreciated.

I soon learned that the big literary prize in Australia is the Miles Franklin Award, named for Miles Franklin, author of My Brilliant Career (1901), which is credited as being the first Australian novel. The award was founded in 1957 and has an important role to play in publicising new books and increasing sales. Unlike some big book prizes elsewhere, even shortlisted authors see a significant increase in sales, rather than just the winner, and the prize has boosted the careers of writers such as Patrick White, Peter Carey, Michelle de Kretser and Thomas Keneally (author of Schindler’s Ark which was turned into the film Schindler’s List).

Notable Australian poets include Les Murray, Judith Wright, John Kinsella, Robert Gray and Gwen Harwood. A great resource for new Australian poetry is Red Room Poetry, which commissions new work and features a lot of poetry on their website. Many Australian poets engage with the environment, the climate crisis, and Australia’s vast landscape. It’s not just the poets who are concerned with these things though – contemporary writer Tim Winton uses a powerful Australian vernacular to explore life on the sparsely populated west coast of Australia. It’s worth remembering that Australia is roughly the same size as the USA, but with a tenth of the population. These fun maps help give a sense of perspective: https://www.buzzfeed.com/simoncrerar/mind-boggling-australian-maps

In recent years, more emphasis has rightly been given to indigenous voices. Award-winning writer Kim Scott’s latest novel Taboo will be published in the UK in September and Claire G. Coleman’s novel Terra Nullius has been receiving rave reviews. This year’s Miles Franklin winner was Melissa Lucashenko, who is of European and Bundjalung heritage, for her blistering novel Too Much Lip. However, at the time of writing, Too Much Lip is only available as a Kindle download and it’s frustrating how many Australian writers are not in print in the UK. This includes Eleanor Dark, former owner of Varuna, whose novel, Timeless Land (1941), regularly features on lists of Australia’s finest books.

If you’re travelling this year, why not investigate the local literary scene? Admittedly picking an anglophone country makes it easier if (like me) you don’t speak another language, but there are an increasing number of presses dedicated to publishing works in translation, including Charco Press, which specialises in writing from Latin America, and Peirene Press, which focus on European fiction. Even if you’re not going abroad, there’s nothing to stop you travelling in your mind. Pick a country, do some internet research, and see what new stories you will discover.