Following on from my previous blog, I’m going to discuss my second residency in Finland. This was at Saari, which offers two-month residencies for artists of all description, not just writers. I applied to work on a very new project, Vegetal Souls, a book which I hope will consist of poems, short essays and short fiction, all exploring what it might be like to be a plant (a blog on this is forthcoming, if it has piqued anyone’s interest!).

All the artists are housed in elegant wooden buildings in a fairly remote area of south-west Finland – it was a two km walk to the nearest bus stop, and there were five buses a day to the nearest town. I was careful never to miss the last one back! The language barrier wasn’t a problem as most Finns speak English. As there are only 5 million Finnish speakers in the world, most Finns learn English at school in order to be able to communicate – whether that’s with native English speakers or with their Swedish neighbours.

My own neighbours at the residency were enjoyably diverse in their creative practices – from Finland there was a poet, translator, sculptor and performance artist; there was also an Australian visual artist and book-maker, a visual artist of Swiss-Haitian heritage, and a British curator who lives in France.

We had very different projects to work on, but there were lots of overlaps in our interests. Several people were focused on the environment and climate change and there was a lot of interest in plants and fungi. But what really struck me was that, no matter how different our finished artworks might be, our working methods had so much in common.

For example, I learnt about ‘meditative drawing’, where you focus steadily on an object and then draw it without looking at your paper. You do this repeatedly, choosing different objects if you like, without worrying whether what’s on the page is any good. What matters is that you’re paying attention to the object and really looking hard at it. As someone with almost no experience of drawing, I found this lack of pressure to draw ‘well’ very liberating. And I’ll never look at a red cabbage in quite the same way, now that I’ve stared at one for ten minutes…

This way of drawing reminded me of ‘free writing’, where writers scribble for ten minutes without worrying about whether what they’re writing is any good. What matters is that they’re maintaining their practice but also overcoming their desire to craft perfect sentences from the get-go. (Remember: first drafts are meant to be rubbish, the redrafting is where quality control should kick in. Keep churning out those bad first drafts, writers, don’t be afraid of them!).

Sketchbooks are a lot like notebooks, of course. One artist had drawn a portrait in her sketchbook every day for a year. Some were of people she knew, deliberately posing, but often it was just a quick sketch of a stranger on a tram, in a library, in a café (who was oblivious to what was happening). She said she became far more fluent at drawing people as time went on (and she’s an internationally-acclaimed artist, these exercises aren’t just for beginners). This is a great lesson for any writer (or any artist) – writing for a short time each day is much better than not writing for weeks or months just because there’s no opportunity for a long writing session. Writing for fifteen minutes a day will create plenty of material, and it’s much easier to redraft this work than to return to writing after a month’s break, when you feel as though you’re beginning from scratch all over again.

I also noticed how much time everyone spent reading. In-depth research informed everyone’s practice, whether we were writing stories and poems, drawing, creating handmade books, painting, making costumes, sculpting or curating. We swapped reading suggestions and lent each other books and often found we were interested in the same authors and ideas. 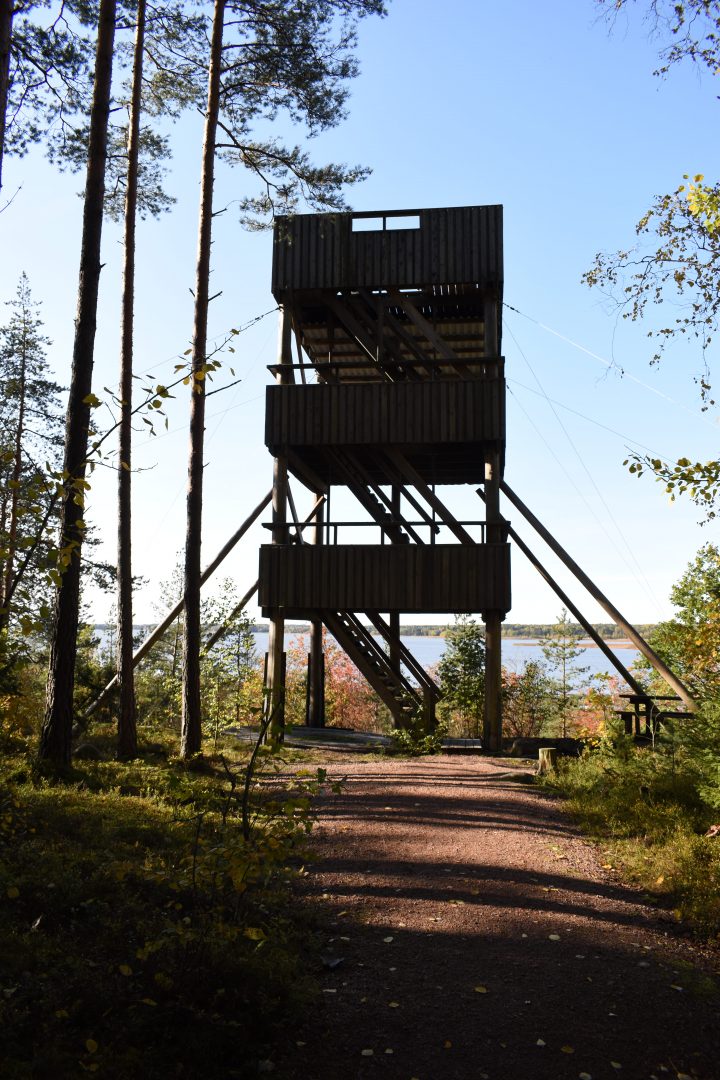 Finland is beautiful – lots of lakes, lots of forest, but very, very flat. Most days I walked to a bird tower that overlooked a sheltered part of the Baltic Sea. The change of season was very apparent. When I arrived at the start of September it was twenty-four degrees Celsius and a few of us took a rowboat out to a tiny island and swam in the sea (okay, I just paddled). By the time I left Saari at the end of October, the leaves had fallen and the first snow had arrived. It was now minus 5! The seasons showed in the birdlife too – thousands of barnacle and Canada geese were resting here in September, stopping over on their long journey south for winter. When they left the place felt deserted until some juvenile osprey arrived (I think they were osprey anyway, after a stilted conversation in minimal English and even worse Finnish with a fellow twitcher!), on their way to Africa. Dozens of jays were busy burying acorns and the bullfinches and fieldfares made short work of the rowan berries. As the cold set in the forest got quieter, until just the jays’ squawking gave any indication of life still carrying on.

I wrote a lot in two months of course, but I also rested, read, walked, thought, and refreshed my ideas. As I mentioned in my first blog, a residency is a privilege, and I’m aware that it’s not something that everyone is able to experience. Some residency organisers are actively seeking to resolve some of these issues. For example, Varuna Writers’ House, where I stayed in Australia, is currently fundraising for an accessible writer’s studio. Other organisers are looking into parent-friendly residencies where childcare is arranged during the day. For those who can’t leave their home or their responsibilities, perhaps remote residencies might be the next best option, with online get togethers so that people can enjoy the rich cross-pollination that occurs when ideas are shared between different artistic practices (I’m not sure if such things exist yet, but they should. Though, of course, the OCA offers opportunities for these remote exchanges of ideas).

Another concern is the carbon footprint of these residencies. From 2020, Saari is making extra funding available to artists who choose not to fly, to encourage ‘slow travel’ (which tends to be a more expensive option than flying). There’s still plenty to be done to make residencies an accessible and environmentally-responsible choice for artists, but it seems organisers and institutions are starting to move in the right direction. Meantime I’m very grateful for the opportunities I was given this year but am delighted to be home and I’m going nowhere at all for the foreseeable future!