A tale of two residencies – Part 1

This year, for the first time in my life, I was awarded an international writing residency. Then, in quick succession, I was awarded another! My life is not usually so glamorous, but this double stroke of good luck meant I spent August at Varuna Writers’ House in the Blue Mountains of Australia, followed by September and October on the shores of the Baltic Sea in south-west Finland. I had a week in-between to do my laundry and get my head together!

I was gifted three months to do nothing but write – and I realise what an utter privilege this is. Residencies can be out of reach for people with disabilities and/or caring responsibilities, and/or who cannot take the time off work (as a freelancer I can take my work with me). Each residency was extremely different. I’d never been to Australia before and in all honesty I had never seriously considered visiting it – partly for financial reasons and partly because (to my shame) I’d assumed it would feel a lot like Britain, but with more sunshine. I was wrong. Yes, everyone speaks English and there are many cultural overlaps, but there are also striking differences. 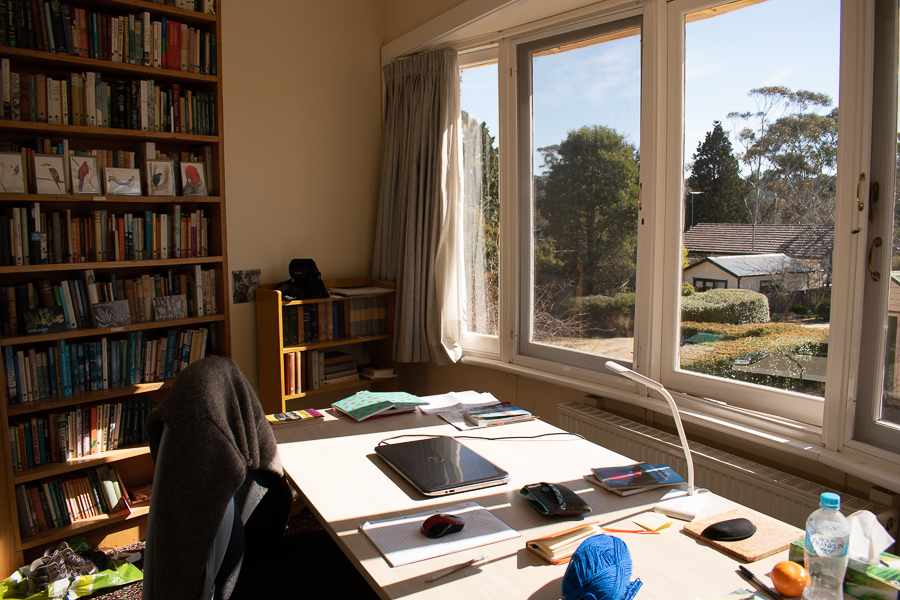 Firstly, I was surprised and pleased by the repeated acknowledgement of the Aboriginal communities at every event I attended (such as author readings at the wonderful Blue Mountain Writers’ Festival), where the speaker acknowledged and gave thanks to the traditional custodians of the local area. Several people were at pains to tell me that these acknowledgements were more than just lip service, and these ‘Acknowledgement of Country’, as they are known, are valued by the Aboriginal communities. I also attended a ‘Welcome to Country’, where a member of the local Aboriginal community welcomed the audience to the event – whilst I no longer remember the exact words spoken, it was a heartfelt and deeply moving speech about the connections people have to the land, and the importance of respecting the natural world.

The natural world is certainly one of the most striking aspects of Australia. I like to think I’m half-decent at identifying the trees, wildflowers and birds that share my corner of coastal Scotland, but suddenly I was plunged into ignorance. Many species in Australia live only in Australia, and I recognised very few. In time I learned that almost every tree was a eucalypt (more commonly known as a gum tree) and many shrubs were either a wattle or tea tree plant. The birds were extraordinary, with even suburban gardens ablaze with brightly-coloured king parrots, crimson rosellas and sulphur-crested cockatoos.

It was disorienting experiencing the tail-end of winter/early spring when I’d left Scotland during what passes for summer. The daffodils were starting to bloom and I saw an early swallow arrive from the north of Australia where it spends winter. The stars in the sky were different, the verges at the roadside were nibbled by kangaroos, and the dawn chorus consisted of the VERY loud calls of kookaburras. It was definitely not Britain!

I applied for this Australian residency to work on short fiction for my first collection, Creaturely, which explores our relationships with other species, as well as the ways in which we ourselves are ‘creaturely’. I’d hoped to be inspired by the flora and fauna in the Blue Mountains, but on my arrival I felt daunted by the prospect as I’d not anticipated how different the natural environment would be.

However, I realised that I could write stories from the point of view of a visitor and that I didn’t need to ‘know it all’. One of my stories was prompted by a visit to a wombat orphanage – the joeys (the name for all baby marsupials, not just kangaroos) are rescued when their mothers are killed, usually on roads, where I bottle-fed a wombat by the name of William. All the wombats are released into the wild once they’ve recovered from their ordeal. I also found a wonderful book in a second-hand shop, The Secret Life of Wombats by James Woodford, which contributed enormously to my burgeoning knowledge of/obsession with wombats.

Another thing that surprised me on the residency was that I began writing poetry after a hiatus of several years. Having the time and space to let your mind wander and play can lead to unexpected outcomes! There were two other international writers staying at Varuna and we were invited to take part in a reading and Q&A at a local venue. I read my new poems and they were given a kind reception. This reading in the local community is one of my fondest memories of my Australian residency, although dancing all night at the Elvis Karaoke Festival was also a highlight… The Aussies like a good time, although I could have predicted that!

In my next blog I’ll reflect on my very different residency in Finland and the joys of exchanging ideas with artists from outside your own creative specialism.