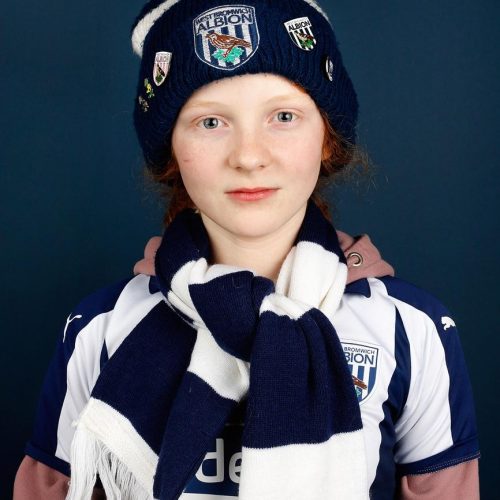 10 of us Midlands OCA photography students spent a highly enjoyable afternoon with Birmingham based artist Stephen Burke at the Blast! Festival of Photography Sandwell, West Midlands.

The festival featured 40 contemporary artists including Erik Kessels, Liz Hingley and Mahtab Hussain and celebrates the everyday lives of the people and communities of the post-industrial towns to the west of Birmingham known as ‘The Black Country’.
We began the day by visiting Stephen Burke’s current project The Lords My Shepherd which was specifically commissioned for the Blast! Festival.

The project honours and celebrates the fans of West Bromwich Albion FC exploring the emotional connection and the role the club plays in the identity of West Bromwich and the wider Black Country. Accompanying the portraits was an audio work of interviews with fans, recordings of the crowds at matches and music associated with the club. The exhibition was showing at The Vine which is an Indian family run curry pub and grill long associated with supporters of WBA.

Much of the work exhibited in the Festival was people and portrait based so for myself, as a Landscape student I assumed that, visually at least, there might be less relevant works but as always there was huge amounts to learn in so many different ways.
There was a continual sense that Blast! Festival’s relationship with the people of Sandwell has genuine depth and integrity and this commitment ultimately shows strongly in the quality of the visual projects and exhibitions. There was also a whole programme of community based activities throughout the Festival month to engage and involve the local population.

I particularly enjoyed Girl Gaze: Journeys Through The Punjab and The Black Country which were the exhibitions situated in the old British Muslim School building.

These exhibitions focused on the stories and experiences of young girls and women and illustrated the gender inequalities between the female members of the community and their privileged male counterparts, brothers, fathers, sons and husbands.
Dawinder Bansal’s multi-media installation celebrates the lives of first generation South Asian women living in Sandwell and included a short film Asian Women and Cars: Road to Independence in which the women describe their very first experiences of learning to drive.

The film uses oral interviews and narratives and through these recordings the independence that learning to drive gave these women suddenly became real and very moving, demonstrating just how this methodology can add real depth and authenticity to a visual project.

Although the Library exhibition space was closed on the day of our visit I had seen Erik Kessels’ Comeback on a reconnaissance trip to the festival. Comeback consisted of a number of large scale portraits that had been re-appropriated from the archives of the former Tipton Carnival Queens competition. These were hung around the old town hall dance floor, an idea which was absolutely inspired, supported by a backing soundtrack of  mashed up disco hits from the 70s and 80s. It was all very effective.

Stephen Burke was excellent value throughout the afternoon; he was enthusiastic and supportive throughout and constantly offered his insights and ideas. Stephen is a young artist who is progressing well in his career so this really was a unique opportunity to gain an insight into what could lie ahead by sustaining our practice beyond a student career.

We talked about how we, as students, could begin to establish ourselves in photography and arts communities by being more visible by attending relevant events, striking up conversations, making contacts, building relationships, creating networks as well as the process of commissioning; we even managed to fit in an informal viewing of Hazel’s impressive BoW photobook.

It was also a great learning opportunity to organise the event; from developing a relationship with Stephen Burke who is also the Project Producer for Grain contemporary photography group in the West Midlands.

The aim was to bring an OCA group of students together with the Midlands arts community and so the idea to involve Stephen in his capacity as a participating artist at the Blast Festival was just very opportunistic.

As always with these OCA gatherings the social interaction with our student peers was fantastic and we all got that motivational lift that is so required to get us through the trials and tribulations of distanced learning.

Jenny Stork (EYV) was attending her very first study event after only 6 weeks as a student and saw the immediate benefits of attending the study visit as:

“Networking with other students, learning more about the process involved in creating a body of work, finding out about new artists I have never heard of, also organisations such as GRAIN and the Pride Of Place Project Inspiration for future assignments”

Big thanks to Anna Goodchild for travelling all the way up from Paignton to support the visit just a week or so ahead of her own SYP exhibition. Good luck Anna!

Also for other reviews of the day visit L3 (HE6) Judy Bach’s learning log at:
https://judybachbodyofwork.wordpress.com/2019/06/25/study-visit-blast-festival-of-photography/

If you would like to receive any information about OCA Midlands Photography events in the future please email Allan O’Neill at allan513287@oca.ac.uk  and we will add you to the mailing list.

We will of course advertise all activities via the OCA forum and the OCA study event diary and students from all regions and disciplines are more than welcome.

> Next Post What I learned on a writing retreat