OCA Music: Flute recordings - The Open College of the Arts
Skip to content 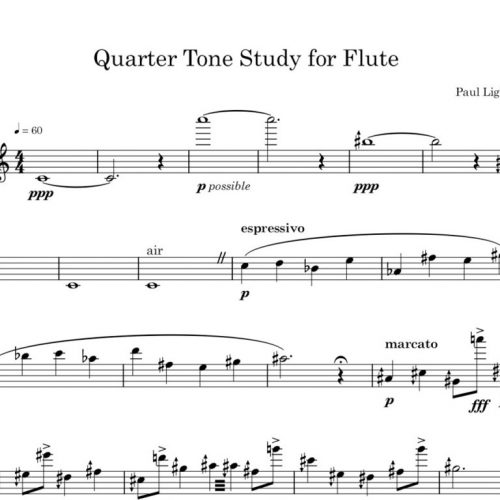 As part of a developing collaboration with UCA’s music department, I visited the new recording studios at the Farnham campus on 27 March. I recorded some flute music by UCA composers as part of a film music project, and, in return, was given the opportunity to use the studio facilities to record solo flute works by OCA composers.
Four students responded to the call for pieces. The brief was that the pieces should be for an unaccompanied flute, and up to 4 minutes in duration. The four submitted pieces demonstrated a diversity in style between the composers, and varied approaches to the use of the flute.
Paul Lightning took the opportunity to explore the quartertone potential of the Kingma System flute, prompted by the capability to notate quartertones in Dorico. This was his first experience of composing in quartertones, and used them as an extension of the whole tone scale. He says ‘the quartertone is used to create intervals of different sizes, from a single quartertone to an octave plus or minus a quartertone, as well as being used as an interval of transposition’. The piece uses extremes of register and dynamic and is particularly challenging in its requirement for very soft high register sounds, but is an interesting, and successful approach to the expressive and technical capabilities of the flute.
Paul says: “Through this project I engaged with the idea of not just writing for a particular instrument but also with the performer in mind. Having met Carla through a couple of work study days and hearing her speak about her instrument and performing experience I felt that I could connect with her passion for new music and the possibilities of expression using “extended” performance techniques. I wanted to write something that Carla would find interesting to play as well as a bit challenging! At this time I was familiarising myself with the music software that would allow me to notate and pre-listen to music using the quarter tone scale and so this was how my experimental piece emerged. I was happy that Carla enjoyed learning my piece and her feedback on the notation, challenges and additional resources for further research were very useful. I was very satisfied with the result which has made me hopeful for other fruitful collaborations in the future.”

Anne Davenport submitted a piece called Winter. She says. “This piece was my 2nd assignment for Composition 1. I chose to write for the flute as I wanted to explore its different timbres. It is in A1 B A2 form with some differences between the outer movements to enhance interest in the third section. I decided to write an impression of winter as I felt it suited the flute’s qualities. The outer sections use the breathy lower register of the instrument and are legato and slow with flutter-tonguing representing shivering and the languor induced by extreme cold. The middle section is quick the higher, clear tone, semiquaver runs and staccato notes intended to give a glittery icy impression.
I had only heard it via Sibelius before Carla recorded it so hearing it played on an actual flute was a revelation. The contrast between registers was clearer, the flutter-tonguing performed by a person rather than produced electronically and the whole piece had more life to it.”

John Croall’s piece was a set of variations based on an initial melodic idea. It reminded me a little of the sort piece one might expect to find in the renaissance keyboard or lute repertoire, where a melodic line is subject to a series of ‘diversions’ which range in complexity. John made use of the flute’s natural agility and the warmth of the low register. John says:
“ I had written a short flute piece for an exercise in Composing 1 exploring different scales.
At the time I thought It could be the basis for a set of variations but worked on another piece instead. Then a call went out from Carla asking for flute pieces. Aha! I remembered my flute piece and after a few hours I had written my theme and variations.
I listened to the playback on Sibelius and it sounded OK. But when I heard the live version Carla recorded I was thrilled. My piece really came alive.”

Tom Bryans wrote a descriptive piece called Weather the Storm. Since the piece had such a distinctive title, I recorded two versions to enable him to hear differences of interpretation, and to demonstrate how subtle differences can make quite an impact on the overall performance. Read Tom’s blog post about it here:
http://tom-bryans.tumblr.com/post/184269091321/my-score-for-solo-flute-i-guess-was-open-to

> Next Post What is your tutor up to? Jim Cowan