Music and Maths 2: Back to Basics - The Open College of the Arts
Skip to content 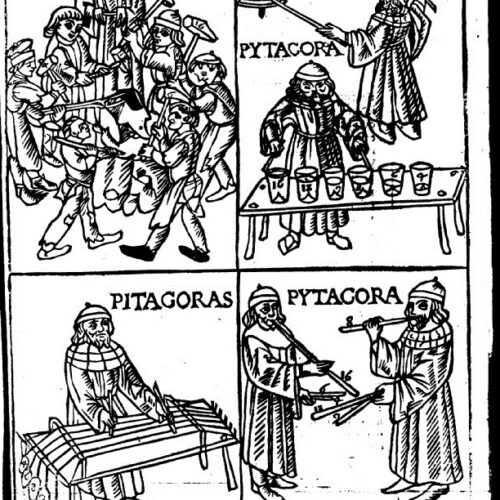 Music and Maths 2: Back to Basics

As a composer I’ve always been interested in numbers and maths, and the way they relate to music. Maybe it comes from playing around on my Dad’s old DOS computer, making bleepy minimalism, or perhaps it comes from first learning about the harmonic series at school, and how timbre arises from the physical properties of instruments. Either way, numbers and mathematics are central to my work as a composer, and the elegance and power of mathematical processes are an ongoing source of artistic inspiration for me.

In this series of blog posts I’m going to be looking at some of the ways composers throughout history have explored music through numbers, and sharing some of my own approaches to composition.

While modernism and contemporary music are often thought of as very mathematical, numbers and ratios are in fact central to all western music. In this post I’m going to take a look at the roots of western music theory and explore the mathematical origins of our notions of consonance and dissonance.

The Birth of Consonance

Sound is a deceptively complex phenomenon, the perception of sound even more so, there are, however, some parts of the relationship between sound and music which have been understood for a very long time.

As the story goes, Pythagoras, the ancient Greek philosopher and mathematician, was going about his ancient Greek day when he came upon a blacksmith’s shop. The blacksmiths were using four metal hammers, which rung like bells when they hit the anvils. Pythagoras noticed that some combinations of hammers were consonant, and some were dissonant:

On further investigation Pythagoras found that the pitch each hammer produced was proportional to its weight, and whether the hammers produced a consonance or dissonance was derived from the ratio between their weights. In the story the weights of the hammers are:

If we plug the ratios between these weights into our table we get:

Sadly, it’s pretty unlikely that this story is literally true. It turns out that the acoustics of hammer-heads don’t work quite as simply as they are presented here. It is true, however, of chisels, so the principle still stands. It is also undeniable that the works of Pythagoras and other Greek theorists are the starting point for our current understanding of sound (not to mention the rest of the natural world!).

It is only by understanding the physical nature of sound that instrument builders or music programmers know how to achieve specific musical effects. Look, for example, at the elegant curves of a grand piano or a harp. The equation that describes this curve is the result of a relatively simple relationship between the dimensions of the strings and the ratios between adjacent notes. The same ratios can be found in the lengths of tubing in a brass instrument, or the distance between the holes on a wind instrument.

It’s interesting to note that while the definitions of consonance and dissonance have changed over the centuries, they’ve done so in a consistent way. Discounting pre-Medieval music, the earliest music traditionally considered part of the Western canon is plainsong, sung in unison or octaves, the unison being 1:1 and the octave 2:1. The next major development was organum, based on parallel, perfect 5ths (3:2). This was followed by polyphony, and eventually tonality, which admitted major, and then minor thirds as acceptable consonances (5:4, 6:5). Late tonal music incorporated complex chords featuring 7ths (9:5) and 2nds (9:8), arriving at arguably the lingua franca of the modern world, jazz harmony, where chords buzzing with semitones (16:15) and tritones (11:8)*.

As we can see, while the definitions of consonance have changed, they’ve done so in a way which tends to admit more complex ratios, as if once the ear of history has adapted to a sound, it’s ready to take on the next one.

*A disclaimer: these ratios are not exactly what you find on a modern piano, though they are approximately correct. The inaccuracies arise from the adoption of 12-tone equal temperament, which occurred gradually from about the 15th to the 19th centuries, but that is a story for another blog post.