For the 2020/21 academic year, I wanted to develop a showcase of student work from across the Creative Arts (CA) programme at any stage of their study. I aspired to offer a view of what CA students are achieving through their interdisciplinary practices and hope to share this more widely with the OCA community and beyond. The requirements for CA study are demanding where students have to develop their creative voice across two or more disciplines. Still, their passion for invention and expressing their emerging practice takes them to otherwise undiscovered places.

I asked tutor Garry Clarkson to curate the show, write an editorial and bring his expectations for ‘Crossing the Boundary’ to the subsequent group work discussions that supported our students. I look forward to CA students showcasing more of their diverse creative voices as we progress this space. Here’s a Q and A with Garry to open up some more of his thoughts on the show; enjoy!

Doug: Hi Garry, you mentioned you felt that students were using their interdisciplinary practices to make sense of the turbulent world they were living through, and students place in it. Could you say a bit more about the thematic links you discovered through your curation of the show?

Garry: Whilst I’m flattered and appreciate your description Doug of me ‘writing an insightful editorial’ that highlights, among other things, the diversity of practice that my students are engaged with; initially, I was simply describing the student work I saw. The meaning as such emerges once we start to unravel the various mediums and forms which hint at the subject matter and approach of each student. There did seem to be – in the choice of subject matter and genres – an overriding zeitgeist of loss, absence and constraint as well as a desire to express the opposite: freedom, exploration, making connections. Obviously, in hindsight this was in the context of the unprecedented Covid lockdown and the instability this engenders. As the work was uploaded by students and arrived on the exhibition forum ‘Crossing the Boundary’ I began to notice that there were some recurring subject matter and themes: memory, isolation, exploration as well as students use of various mediums with which to depict these states, both overall and also within each artwork.

This formed the basis of my little introduction to the exhibition (on the left of the paddle web based exhibition). The intro didn’t really come from a predetermined idea that I had personally about the exhibition but from the students themselves – both me ‘reading’ their work as well as the little conference call we did with a number of them. In this video call one of the students suggested that whilst the CA course emphasises ‘crossing disciplinary boundaries’, the work once manifested and displayed could also therefore be seen metaphorically as crossing other boundaries, highlighting and negotiating the binary oppositions of our age: restriction/freedom; inner/outer, domestic/public, wellness/illness etc.

These thoughts then led me to re-visit the notion of ‘Multimodality’ which I had been reading whilst thinking about my own photographic, film, journalism and art work, although this work and exhibition isn’t strictly this term as defined by Gunther Kress in his work, I borrowed the term to imply that it is through the FORM of this work (the application of ‘multiple literacies’ within one medium) that makes this ‘meaning’ – or rather , allows this meaning to slowly emerge due to the context of the Covid uncertain times. Artistic practice that reflects and subtly suggests the instability of the social world in which we live and work. Would that reading fit with the overall ethos of Creative Arts you have in mind?

Doug: Yes, it does. I can see creative arts students connecting with approaches to making that are best suited to their ideas. So the work of Ange Mullins, 2020, Lockdown, utilises a combination of print and photography skills to create a powerful artwork that responds directly to the theme and common feelings we’ve all felt. I also like how Christine Bruce uses video to unpack her body of work, where the subject and materials interweave to form our experience of the objects she’s created.

There’s also a lot of testing and pushing the boundaries of what a student makes on their creative arts journey. For example, Simon Elvin’s short film develops a science fiction theme, where an android, in the form of a puppet, experiences the world for the first time. His practice brings together his application of skills across scriptwriting and moving image and other forms of design and music to develop the technological themes.

Garry:  In my practice, the way artists communicate has developed and ‘complicated’ over the last 20 years. I started my life in photojournalism which sometimes suffers from ‘telling’ the viewer/reader that something has happened rather than ‘showing’ a social phenomena visually, this relies heavily on illustrating a news agenda dictated by others. Then I went to University under the tutelage of people like photo-montage artist Peter Kennard. Many contemporary practitioners who I have either worked with or look up to as artists utilise this multi-level combined approach. I attended a workshop myself with Jim Goldberg in Spain many years ago who described his work as contemporary collage, using photographs he had taken in a reportage way with more considered (on a tripod, lit and composed) images. In addition he combines polaroids, short super 8 and digital films, writing, drawings, ephemera collected from the subjects themselves as well as archive images from family or found images to create what Sarah Wichlacz photo tutor at the Art Institute Washington DC writing on American Suburb X called ‘Non-Fictional Multi-Media Narrative’. Not sure I like the term ‘multi-media’ as it implies the main medium isn’t of primary importance and can be just a photo with some text applied. If you’re a writer the main means of expression is text but inclusion of photos (either found or taken by oneself) will add another layer which ‘plays off’ the main medium. I’m thinking of the novels of W.G Sebald and how photos provide an evocative counterpoint to the narrative rather than illustrating it directly. It’s like the fool in Shakespeare plays who acts as a foil to the main characters and comments on their utterances often critically or ironically because he or she has been given permission to tell the Emperor he has no clothes! 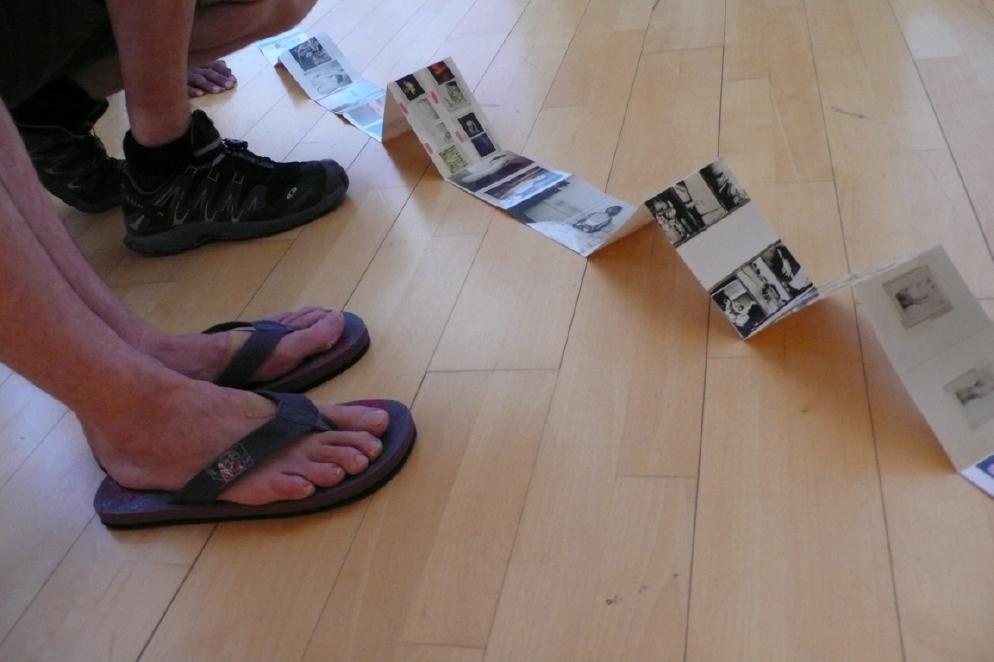 I was reminded of the writer Ted Hughes poem ‘The Jaguar’ when I looked at Vivian Spry’s ‘STOP’ We want change’ collage on the Crossing Boundaries exhibition: The way she uses Anthropomorphism,  attributing human traits, emotions, to a collage of animals in order to have a conversation about the protests that have been particularly important over the last year or so.

Group workshops which I have facilitated in both BA Photography, across a number of universities, as well as Creative Arts and Moving image, definitely do allow students to see that their main or core discipline doesn’t these days exist in a vacuum and that its the experimentation and review which will push the work forward. I think it was Picasso who said something along the lines of ‘how do we find what to make and do? We do it by making and doing’.

We are influenced by the signs we see walking through social spaces, particularly in the  against the backdrop of Covid lockdown (which was a metaphor mentioned in one of the video chats we held on the exhibition launch). Like the signs competing for attention at the beginning of the Kress book, we make sense of the world mainly through visual means but then the interplay of other mediums ‘prompt’ an emotional affect in the viewer.

My thoughts on group workshops and how they engage with students across programmes has helped articulate my standpoint on practice research. In two ways: firstly, emphasising that we as tutor/practitioners won’t ‘tell’ students what to do or operate that old-fashioned ‘pour in’ method of teaching and secondly, it’s though formal experimentation as I mentioned previously, that we can shape our thoughts and feelings about a subject or issue. Its form first then the theme emerges. You and I have talked extensively about the OCA ‘reflective learning’ cycle and I think this really engages students (even though it may take a while for them to fully realise that’s what model they are using). When I have a group I use this model and rather than that idea of ‘Connoisseurship’ – a kind of expertise in a particular subject – which I guess we have but for us it’s more about facilitating methods of making for students to find the ‘meaning’ themselves though practice. This comes from both my teacher training and a book called ‘Making Photographs’ which is a very simple introduction to ‘making’ rather than ‘taking’ photographs by Mike Simmons, part of the AVA/Bloomsbury Basics series. It’s very useful for creative practitioners, not just photographers. I keep a photocopy of his flow chart (page 17) on the wall in my studio (above the computer) so I can remember the importance of the stages: Choose Subject, Identify, Question, Plan, Create, Record….back to Identify; then you go around the circle many, many times until the work is finalised. ‘Reflection and review’ are the diagonals pointing out like the spokes on a bicycle wheel.

Even in a journalistic photograph it is that selection of materials and summarising those findings once combined in a collage or sequence creates a message in the middle of the two mediums. The ‘chin stroking’ worrying of it, by placing one image or medium next to another and allowing reflection, intuition and feelings to guide. It’s back to first principles of film editing to create a ‘third’ meaning which started from Eisenstein in the 1920s.

One of the things that we decided early on – which again, was from students in a group chat, not from me – was how to present the exhibition. We eventually agreed that we would include some short texts from students in the padlet format. Reflecting on their work rather than the ‘connoisseurship’ salon type presentation of just the ‘finished’ artwork as we might have in an old-fashioned gallery. The work is not finalised but a first stage on the learning cycle. In this way, we can see a more open presentation of work.

One of the most difficult things is to encourage students at this level to stop worrying about presenting work and instead just produce art in the context of a creative community with positive comments. The summary text should be short and to the point but of course some wrote more than others. I, as facilitator, sub-edited some just to show students that it is this summarising after ‘reading’ their own work which is the learning. This can take time to practice so that it makes sense as if read by an external viewer. It can sometimes take a long time to get this right and I think that’s another ‘boundary’ (between practice and meaning) that we as learners have to negotiate and review until it makes sense.

Doug – Thanks, Garry. Your thoughts here give us an insight into the approaches for engaging with a breadth of views and modes of creating. I do feel that how we, teachers and students, connect as creative practitioners across boundaries will bear more conversations like the rich vein we’ve mined here.

If you would like to add more to this conversation, please add a comment below; we’d love to hear from you.

Moira Ratmoko recently completed Sculpture 1: Starting out in 3D, on the BA (Hons)...