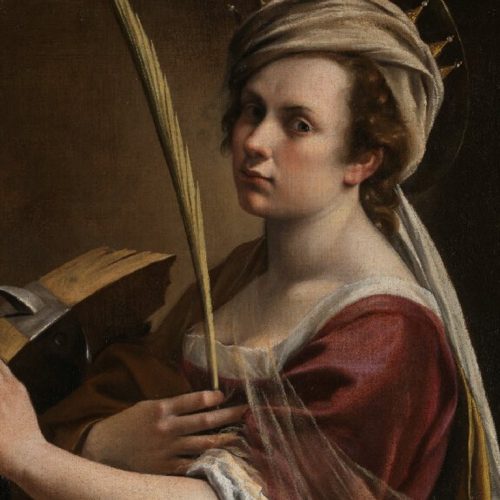 Breaking into the boys’ club

For centuries, women have fought against adversity to pursue artistic careers in what was (and arguably still is) a man’s world.  They have suffered the humiliation of having their works passed off under someone else’s name, of being barred access to training, of struggling to do what men have taken for granted (simply represent themselves on canvas or celluloid) and of having their pieces relegated to dark corners of museum and gallery storerooms.

And then there is the issue of cold, hard cash.  Having trouble getting fairly compensated for your work?  Spare a thought for Artemisia Gentileschi, one of the most renowned female painters in seventeenth century Europe, who in a letter to an underpaying patron wrote: “I was mortified to hear that you want to deduct one third from the already very low price I had asked.  I am displeased that for the second time I am being treated like a novice…”  One wonders what she would have thought of the £3.6 million paid by London’s National Gallery last year for her Self-Portrait as Saint Catherine of Alexandria.  The painting, only the twenty-first artwork by a female artist to enter the Gallery’s collection of more than 2,300 works, has been painstakingly restored (an in-depth YouTube series documents the process) and is currently touring UK schools, libraries, doctors’ offices and a women’s prison.  (It goes back on display at the National Gallery in December, ahead of the first major exhibition of Artemisia’s work in the UK in April 2020.)

Artemisia’s skill as an artist has often been overshadowed by the details of her life.  Aged seventeen, she was raped by Agostino Tassi (her painting instructor), and then subjected to intense questioning and torture (metal rings were tightened around her fingers by strings) during the seven month trial that followed.   Overcoming enormous personal and professional challenges as a result of her gender, Artemisia’s dramatic, dynamic images, with their strong contrasts between light and darkness, are now justly regarded as masterpieces.

Self-portraits by women undeterred by the restrictions of ‘femininity’, have also been on display at Lyon & Turnbull in London (until 6 July).  “Bright Souls”: The Forgotten Story of Britain’s First Female Artists has explored how three women in seventeenth century Britain conquered prejudice to become pioneering artists.  (See this short video for more on the show.)  Forced to operate in a profession whose assumptions and standards were set by men, the creativity of Joan Carlile, Mary Beale (supposedly one of the first portrait painters to encourage her sitters to smile) and Anne Killigrew (who died of smallpox at the age of just twenty-five), is finally being recognised.

Today, many female artists are working in a way that undermines the very idea of the self-portrait.  Cindy Sherman, for instance, known for inventing fictitious characters and photographing herself in imaginary situations (using elaborate costumes, make-up, props and prosthetics) produces complex images that are anything but self-portraits.  Sherman’s first UK retrospective at the National Portrait Gallery (until 15 September) includes the seminal Untitled Film Stills series (1977-80) that cemented her reputation (in which she posed as archetypal characters from American B-movies and European art house films), and more recent works such as Clowns (2003-2004) and Society Portraits (2008).  Sherman, who started out painting but went on to reject the medium (its prevailing visual mode was dominated by ‘bad boy’ artists), uses photography to scrutinise the facades we all adopt – think projected identity, artificiality and selfies.  Her captivating, unsettling art of disguise also comments on the role of women in society and how fully we have digested cultural images of femininity.

It is easy to see why, for some, women artists have assumed an almost symbolic role as ‘heroines’, breaking into the closed male universe and bringing to it their own values and experiences.  It takes a lot for women to make it in the art world, but that does not mean they have to be one of the boys. The work of talented, ambitious women like Artemisia Gentileschi, Mary Beale and Cindy Sherman, demands our attention and challenges us because we feel the seriousness and conviction of their compositions.  The images speak for themselves. Or, as Artemisia once said, “now I’ll show you what a woman can do”!