Student stories: A new collaboration - The Open College of the Arts
Skip to content 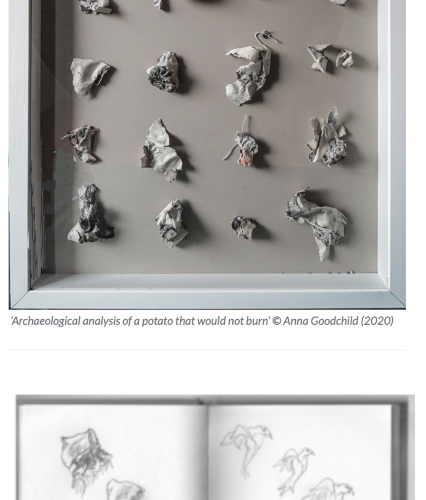 Who would have known that an OCA SW study day led by Moving Image lead, Matt White, and a new music & visual art collaboration initiated by Music lead Carla Rees, would have led to a Happening, which led to a photographic exploration, which led to doodle-making which led to an illustrated short story which has nothing to do with moving image or music – at least for the time being?

The common theme in all this is keeping in touch and being open to new ideas.

The BBC ran a competition which invited people to write a script about their experiences during lockdown, involving internet collaboration.

I had sent illustration student Dorothy Flint and other members of her Happening group the construct I had made following my ‘archaeological analysis of the potato that would not burn’. (See my previous blog on it: “Post-Happening Developments”).

Dorothy wanted to do some doodles of the parts of the inside of the ‘potato’ and I would write a story from them.

Sadly, I was too late to enter the work for the competition.  My fault, I didn’t read the closing time!

No longer able to attend group study days with their ex-student friends because of the national shutdown, and keen to keep up their friendship, Dorothy and Anna decide to collaborate on an illustrated story, and so meet up online via Facebook, emails and on the phone.

Below are the two images which launch the story, then an idea of one of the first conversations between Dorothy and me, then an extract from the story.

If you would like to read the whole script, please go to the “A new collaboration” post on www.annasyp.wprdpress.com.

Anna: Dorothy, I love your doodles! Please have a look at the story so far and tell me what you think.

Dorothy: I shall develop the dog doodles, and I had seen some wild herbs in the pieces you photographed so I was going to draw them and link them to the characters: a woman who looks like a witch is actually very kind; the one with a bonnet is very young and the third one can be anything we want her to be.

Anna: OK, we’ll regroup same time tomorrow afternoon and see where we go from there & I’ll work on the story tonight – we only have 4 days to go.

Dorothy:  It takes me a long time to get going in the morning – I’ll work on the herb doodles tonight and I’ll send them to you tomorrow.  I get so many emails and phone calls these days  – which is really lovely – but it leaves me very little time to get my house in order.  The people across the road are really kind and do my shopping for me, & the shop around the corner has free deliveries for orders over £20, of course I don’t always have that much , you know, and then I get my fruit and veg delivered weekly anyway so, of course, I’m carrying on with that.  They do frozen meals too so I occasionally order one of those.  I’ll get on to the herb doodles straight away.

Three characters and a dog in search of a story.

Set in a valley in an unspecified place, the three self-isolating characters live a very quiet life with a lively dog they had found wandering along the river at the bottom of the valley.  He had made himself appealing by rolling around in the mud and, wagging his wet & muddy tail, left some interesting patterns on the path.

Young Julie, a recent plant science graduate recovering from a celebration-induced hangover, decides she is going to go back to the woods by the river below their house to find some bilberries growing under the dwarf birch trees, before the Blue Tits get to them.  She wants to make another batch of liquore di mirtilli to replace the batch that she has just polished off.  She wears her new age bonnet to shield her suffering eyes from the glare – any glare.

While Julie was gathering her bilberries and herbs, Isla, Paula’s adopted foundling and the third person self-isolating, was grooming the crafty dog of indeterminate breed.

Dorothy: I think so too. Gill has just sent me quite a few poems she wants me to illustrate so I’ll get going with those!  Although they are going to keep me busy for a while, let’s do more collaborations – it’s been lovely!