Emma Beeby | The Open College of the Arts
Skip to content

I spent many years having ideas for scripts before I ever contemplated becoming a scriptwriter and it was important to me to study the craft of writing before attempting it. Studying gave me a further passion for theory of story and structure, as well as for teaching.

My work has been nominated for awards by the Writer’s Guild of Great Britain, British Comics Awards and winner of Best Writer and Best Newcomer at Scottish Independent Comic Book Awards 2015. 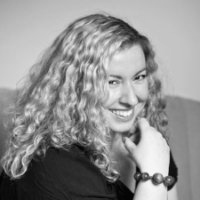