Clive White | The Open College of the Arts
Skip to content

Having access to a professional quality camera and a black & white darkroom when I was studying Physics at London University, some forty years ago, began my interest in the medium.

On leaving I got a job with Conran Design Associates in Covent Garden, ‘humping’ merchandise around to be photographed for the Habitat catalogue. I was impressed by Conran’s creative director; one day I wanted to be the photographer working with him.

I went to study photography at Ealing School of Art. I discovered a culture of photography that existed outside the cognizance of most photographers in this country at the time.

Some of us became acolytes of the Americans such as Garry Winogrand, Ralph Gibson, Robert Frank and the Europeans, including André Kertséz, Brassaï and Josef Sudek.

However the route to making a career here was to become an assistant to a photographer, learning the tricks of the trade.

I was lucky, being hired to assist a room-set photographer who was soon booked to work on the Habitat catalogue. Two years later the creative director at Conran asked me when I was going to make the transition to photographer.

At the beginning of 1979 I was given a fantastic opportunity to launch my career, shooting jobs for Conran. My initial aim was achieved and it was a seal of approval that allowed me to pick up work from other design companies.

Since then my work has included studio still life, food photography, room sets and location people photography, using all formats from 35mm to 10”x8”, including digital capture.

Clients have included all the major supermarkets for own label food packaging, major financial and academic institutions for annual reports and international drinks brands.

My assistants often told me that I should go into education as they learned so much more from me than they did at college.

In 2002 I enrolled on the full time MA Image and Communication course at Goldsmiths College.

I investigated the boundary between still photography and the time-flowing narrative of the moving image, using video loops. I also produced photography and explored interactivity using new media.

I was awarded a PGCE (FE) by Reading University in 2005, prior to becoming a tutor for the OCA. 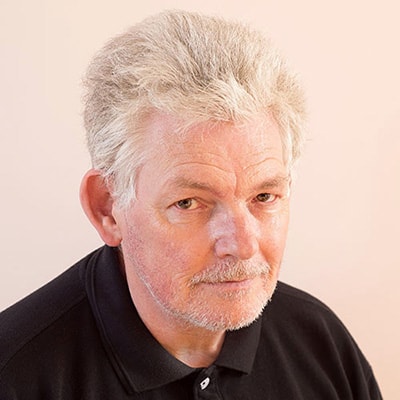