Ben Gaunt - The Open College of the Arts
Skip to content

I am a composer and pianist, based in the north of England. I have been awarded a Bachelor’s and Master’s in composition from the Royal Northern College of Music, a PGCE (in music education) from Manchester Metropolitan University, and a PhD in composition from the University of Sheffield, in addition to receiving numerous prizes, bursaries and awards. I have studied with Dorothy Ker, Alwynne Pritchard, Michael Finnissy, Harrison Birtwistle and others.

I mostly compose acoustic music for solo, duo and other small forces, and I have written for the Icarus Ensemble, Rarescale, London Sinfonietta, London Symphony Orchestra, Ensemble 10/10, York Late Music Ensemble, Christopher Redgate, Oren Marshall, and Sarah Nicolls. My music has been performed at the Huddersfield Contemporary Music Festival twice, premiered in both hemispheres, published by UYMP and recorded by NMC. I also run a Manchester-based ensemble, Sounds of the Engine House, which is dedicated to performing music by living composers.

I am interested in writing music that is the result of multiple, eclectic stimuli. For example, my trio 16th Century Horror is inspired by the movies of David Cronenberg, physical mutations, the art of Salvador Dali, and a book of songs printed in 1520.

In addition to my work at the Open College of the Arts, I am a senior lecturer at Leeds College of Music, and have previously worked as classroom and peripatetic teacher. 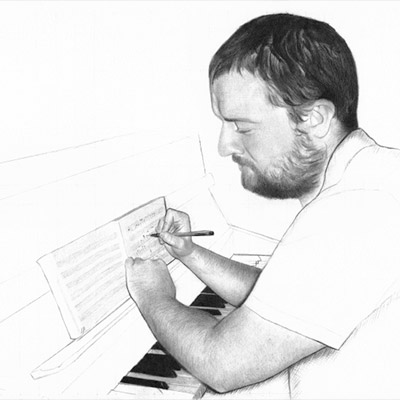